The Borrisoleigh Foróige Club inform us that the disco advertised in last week’s current news that was to have taken place in the Marian Hall on Friday 28 May is now cancelled until further notice.
Mission Walk 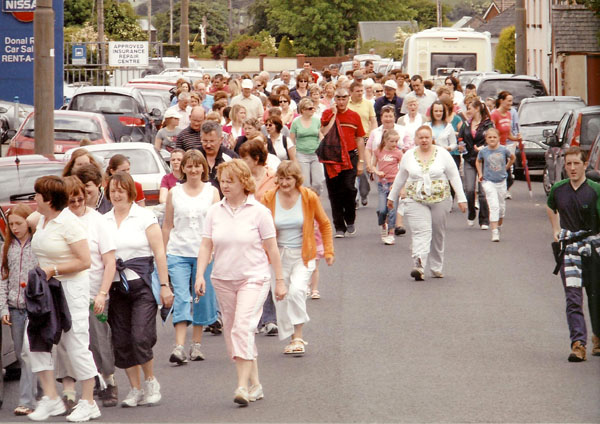 A Mission Walk takes place in Templederry Parish on Sunday June 6th at 2p.m. from Kenyon Centre. There are three routes of varying lengths (2, 5 & 8 miles).  There will be driinks and sweets along the way and a garden party at the finish of the walk.  Your support would be greatly appreciated.  Everyone is welcome to attend regardless of ability to contribute or not.  All monies collected will go directly to Fr. Matt for his Mission Work.  Fr. Martin hopes to be in attendance on the day.

Fr. Matt writes from Brazil:  "I am delighted that you are organising the Walk for our Mission here… The monies given in the past have been of tremendous benefit for me and for our work here… At the moment we are trying to build a few little chapels here in the parish.  These are very simple little multi-purpose buildings.  They will be used as chapels and meeting places at the weekend, and during the week courses and other activities can take place there.

Whatever you manage to raise this year we’ll use some of it to boost the local communities who, despite their poverty, are trying to build these chapels.  In the past years I have been able to help a lot of poor families in different ways e.g. food and medicies.  There are so many ways we can give a little help to encourage people in their struggle for survival.

Assure all who take part in the Walk that I have no expectations.  Anything you can put together for me here will be deeply appreciated.  All the best to you and those involved.  Abracos Matt "

Hurling Championship:  The U12s begin on Friday next 28th May with their first game away to Ballina, and will continue with games on Fridays for the following 4-5 weeks.  Likewise, the U14 championship begins with an away trip to Dolla to play the Silvermines on next Wednesday 2nd June.  We will have five qualifying matches in total with all games scheduled for each Wednesday.  Due to exams the U16 championship does not begin until Monday 19th July again with an away game to Ballina.

Peadar Cummins Tournament:  The annual inter-divisional U14 hurling tournament takes place on Saturday 29th May in Borrisoleigh.  This tournament always produces a very entertaining days hurling in the Town Park and the Juvenile Club are very proud to host this tournament that continues to honour the late Peadar Cummins and his tremendous work for underage hurling.  Once again this year the club has two representatives on the North Panel, Kieran Maher and Shane Kenny.  Congratulations and well done to both lads and best of luck on the day.  It’s all hands to the pump that day and anyone that is available to help out would be most welcome.  Also as we provide refreshments for all teams and supporters, anyone that wishes can deliver sandwiches and other refreshments to the Pavillion on the morning of the 29th.

With the death of Mick Cowan who passed away last week, the Juvenile Club has lost a great friend and supporter.  Mick always had a great interest in the club’s activities and supported all our teams.  His hospitality with barbecues and refreshments provided to young players, selectors and parents after juvenile finals was always greatly looked forward to and much appreciated by the Juvenile Club.  To his wife Breed, his children, and family we extend our deepest sympathy.  Ar dheis de go raibh a anam. 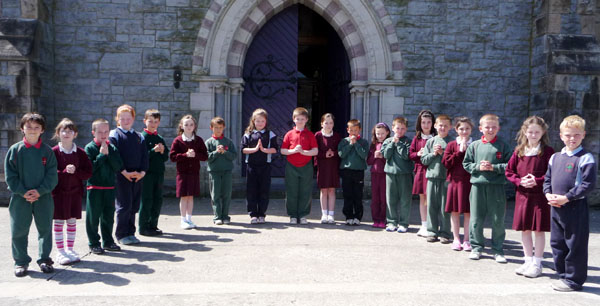 These are the 19 pupils from our three primary schools who will be receiving their First Holy Communion in The Sacred Heart Church on Sunday 6th June – the Feast of The Body and Blood of Christ.  They are pictured here at the parish church after celebrating their First Confession on Tuesday 25th May.

Great credit is due to their teachers, Mrs Maeve Slattery, Ms Deirdre Harrison and Mrs Mary Butler for their efforts throughout the year.  The children have also been participating in the parish based ‘Do this in Memory’ programme which focuses on the doctrine of the sacrament the children will receive.  We wish them, their teachers and their families the very best and we hope that it will be memorable for all of the right reasons. 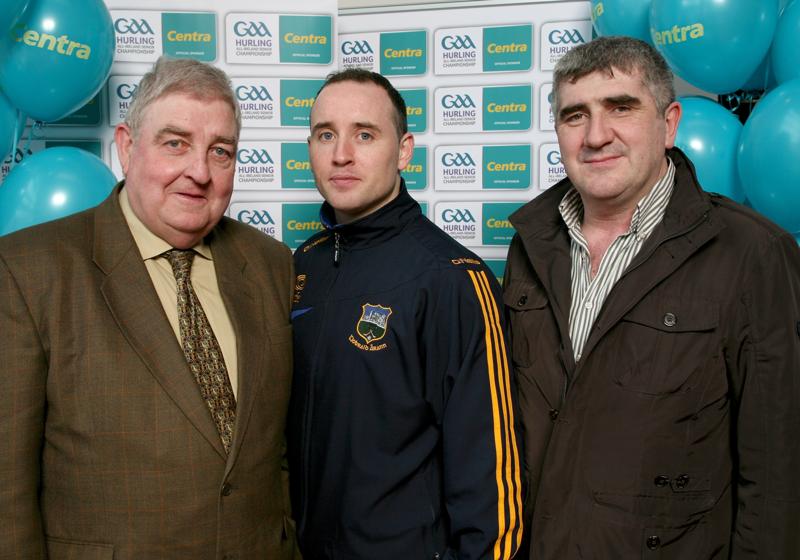 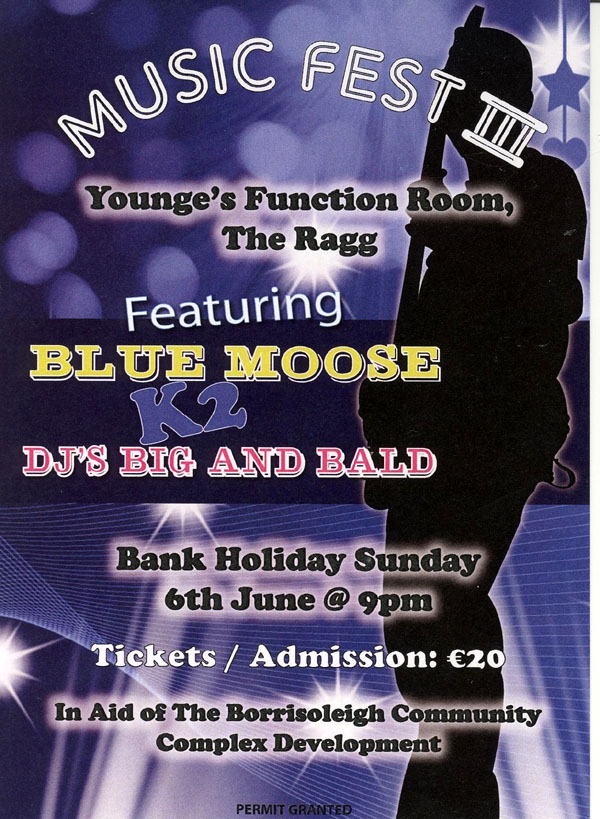 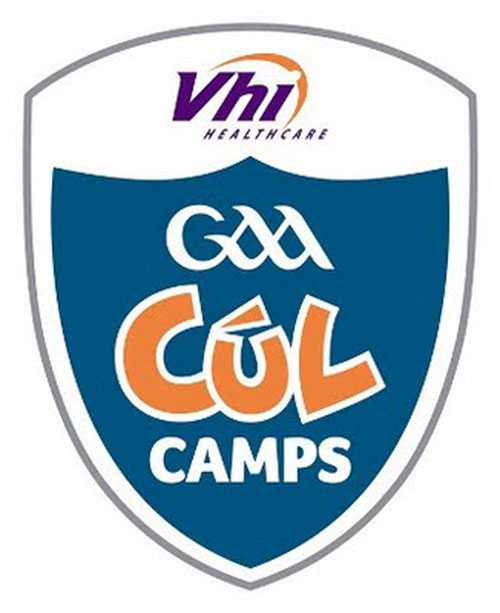 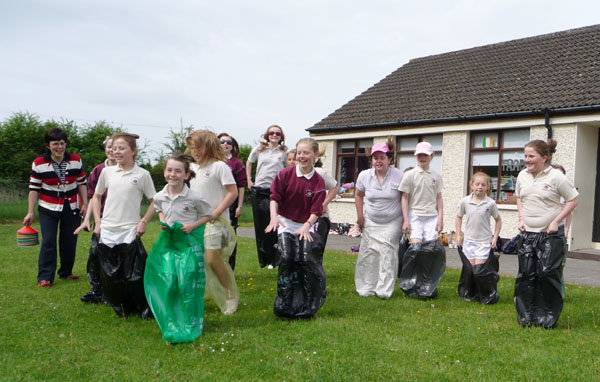 We’ve got it (or ourselves) in the bag!
All the children and staff of St Theresa’s were hoping for sunshine on Friday May 21st and they weren’t disappointed.  The entire school thoroughly enjoyed the Sporthaton.  Special thanks to all the parents and friends who sponsored the pupils. 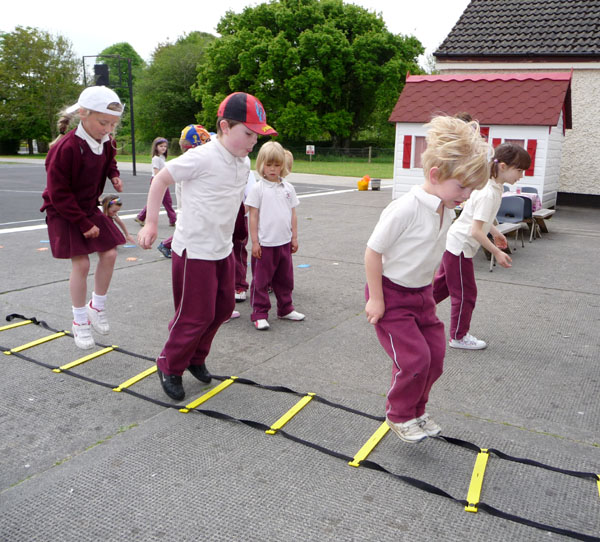 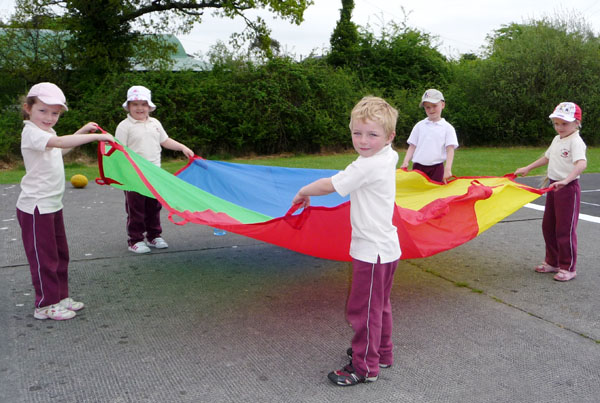 How many colours in the rainbow?

I’m getting handy at this and taking a running jump 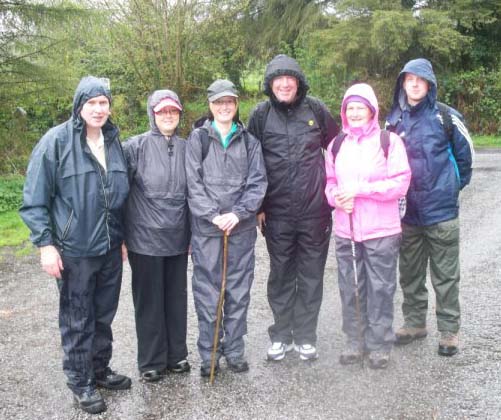 John Kennedy, Miriam Larkin, Joanne Grogan, Ronnie Whelan, Philomena Kennedy & John Kennedy Jnr
On the 1st May 2010 we joined Ronnie Whelan (former Liverpool and Republic of Ireland soccer international) in his "Rocky Road to Dublin Walking Challenge".  The walk took place from 29th April – 4th May 2010 and covered four stages – The Western Way Galway, The Slieve Bloom Mountains Offaly, St. Kevins Way Wicklow and the coastal route from Greystones to Dublin.  We took part in stage 2 which was 16km through the Slieve Bloom Mountains and had a great day even though it rained nearly all the time.  Ronnie organised this challenge to raise awareness for the Myasthenia Gravis Association.  Myasthenia Gravis is an auto-immune disease which causes a breakdown between nerves and muscles.  Symptoms include slurred speech, drooping eyelids and general fatigue.  We would like to thank everyone for their support and are delighted to say we raised €933.00. 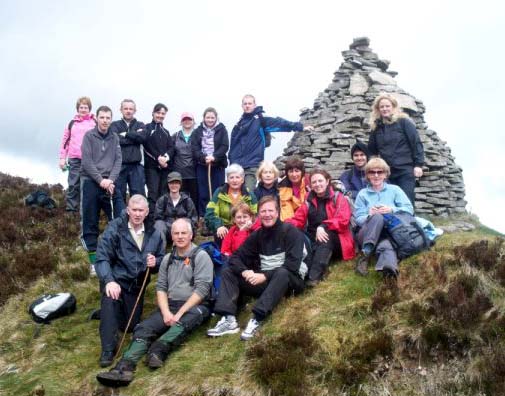 Having a break at the Stoney Man 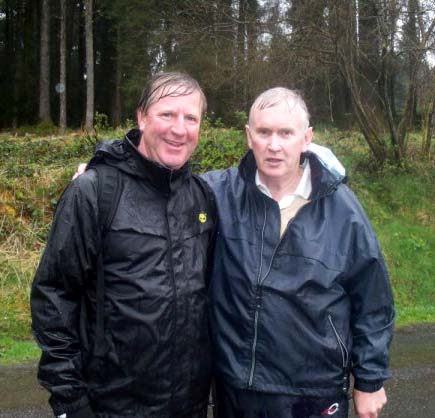 Ronnie Whelan with John Kennedy, a little wet but delighted to have completed the challenge

Looking for your help
We received an email from Sandra Murphy in London, she is looking to trace a friend from some years back.  Her friend’s name is Mary Ryan nee Docherty, married to Thomas Ryan and they have 2 daughters.  The last details she has of them is living in Borrisoleigh.  If you can help Sandra you can contact her at smurfy70@hotmail.co.uk
Dr. Denise Graduates 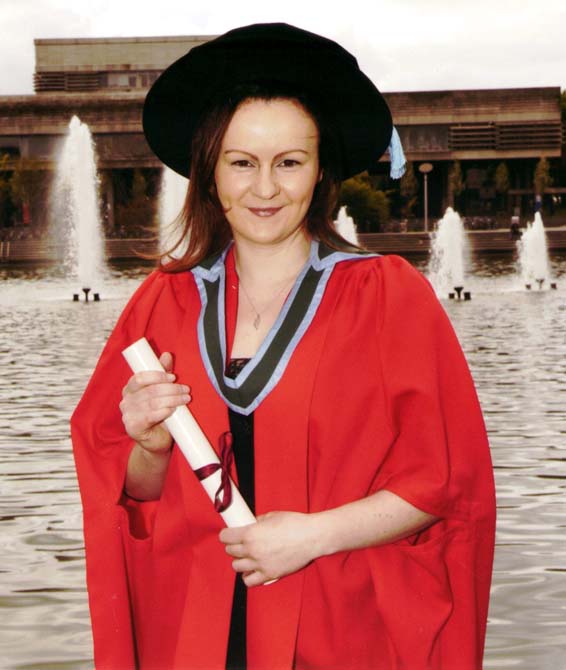 Dr Denise Ryan, Knockdonee graduating with a PhD.  The subject of her research was malignant melanoma 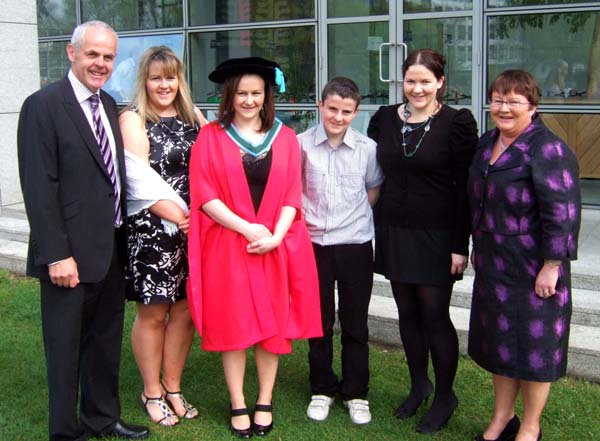 Denise with her parents Nuala and PJ, sisters Edel and Orlagh and brother Declan at her graduation in UCD on 26th April 2010
Denise is a past pupil of St. Josephs College Borrisoleigh and graduated from NUI Galway in 2004 with an honours degree in Bio-Chemistry. 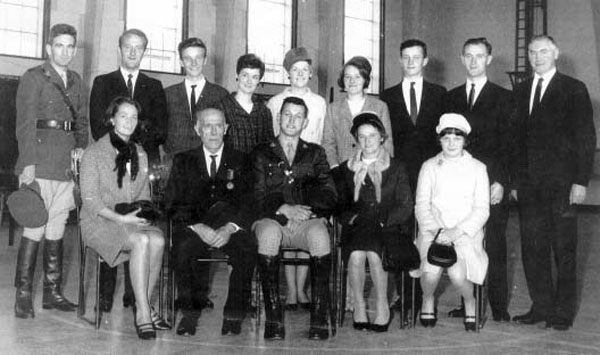 Commissioning of Lieutenant Michael Stapleton, Pallas Cross
Back: Captain V.L. Blighe, Matt, T.F. and Margaret Stapleton, Loretta Kelly, Ileigh,
Phena, John and Paudie Stapleton and Mattie Lambe
Front: Lieutenant Michael in the centre pictured with his parents Mick and Liz, sisters Maura on the left and Monica on the right
Your Website Needs You!