Hanging with the locals! 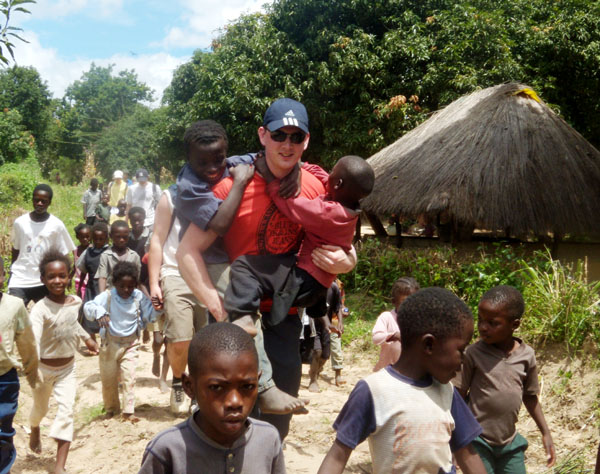 Martin Maher of Cullohill on a guided tour of a village in Zambia where he and fellow teachers and students from the CBS in Thurles went recently on a two-week work project
Last week Martin Maher returned home after spending 2 weeks in Zambia on a work project. This was a project whereby 8 pupils and 3 teachers from Thurles CBS spent 2 weeks working with the Christian Brothers in Zambia . The purpose of this project was to raise awareness of Third World issues here at home as well as to raise much needed funds to aid the Christian Brothers with their charitable work in Zambia .

While there Martin and the group spent most of the time in a training Centre in the village of Murundu in Northern Zambia which was set up and funded by the Christian Brothers. This Centre allows the locals to learn trades such as carpentry, metalwork, construction, tailoring and agriculture. It was amazing to see the level of craftsmanship of these people with such limited and basic resources at their disposal. Two of the days at this Centre were spent working with the construction team digging foundations for new homes for the elderly. This was a really enjoyable experience for the 8 students.

Martin got to visit an Orphanage, an Aids Hospice and an Old Folks Home where he tried to entertain with some music. He felt music was a great way to break the language barrier and brought happiness to everyone. He also worked in a local primary school for street children but the highlight of his trip was when he was given a guided tour of the village of Murundu by one of the locals who worked in the Centre. This tour really emphasized the difficulties and hardships these people face on a daily basis but despite this, these were some of the most happy, content and welcoming people he ever had the pleasure to meet. To see the living conditions of these people would make you realize how fortunate we are and how we should value what we have a lot more.

To finish their trip to Zambia the group got to experience the wonder of the Victoria Falls and Martin even worked up the courage to do a Bungee Jump. The jump was off the bridge between Zambia and Zimbabwe 111m down into the Zambezi River .

Overall it was an amazing eye opening adventure and one which Martin hopes to have the opportunity to experience again in the near future. He would also like to thank everyone who supported him and the trip and gave so generously.

Helping to feed the hungry

The feeding of the poor and elderly programme 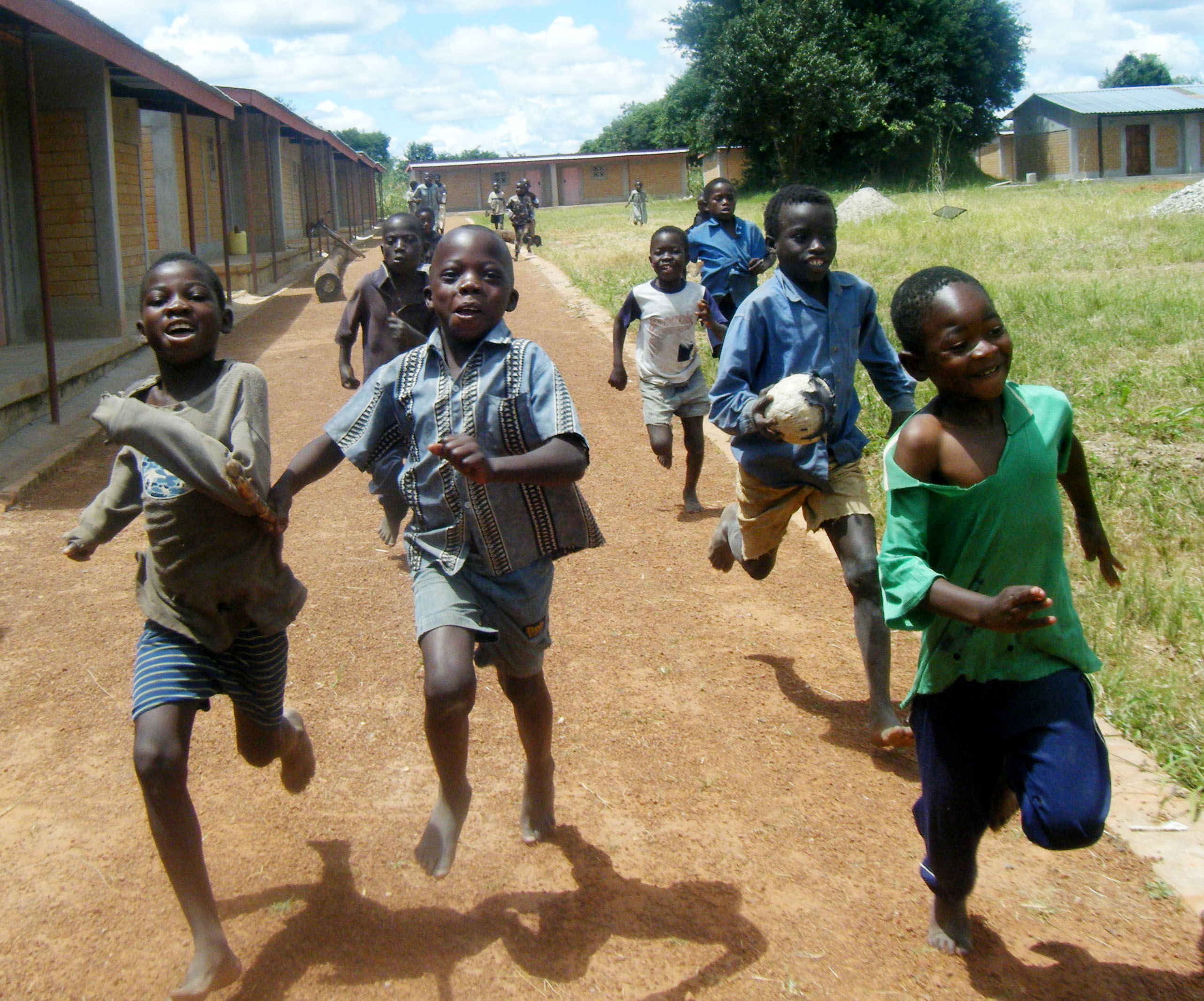 Having so little but yet so happy 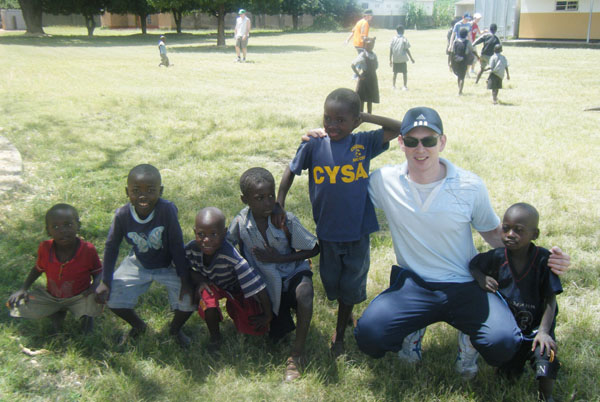 Martin’s team getting ready for an important soccer match 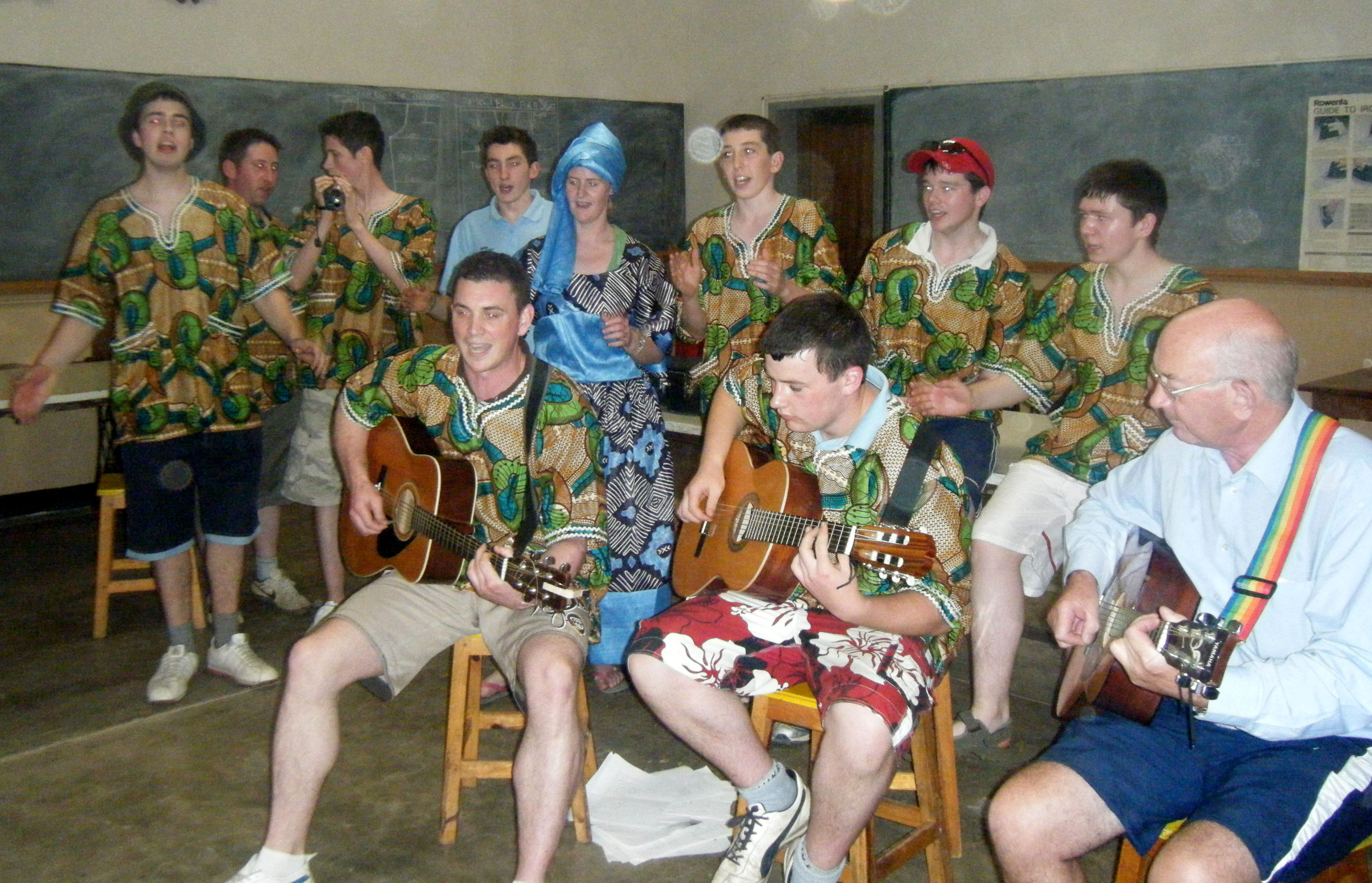 Martin & Co. entertain the workers in the centre. (The tailoring students made all our outfits)

Look at what I got?!

Martin with some of the other friends he found in Zambia 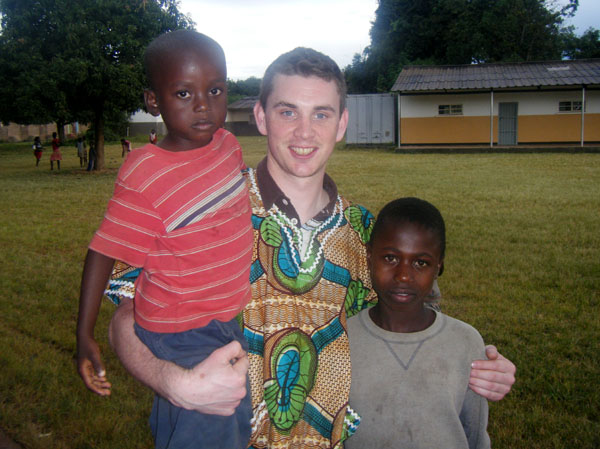 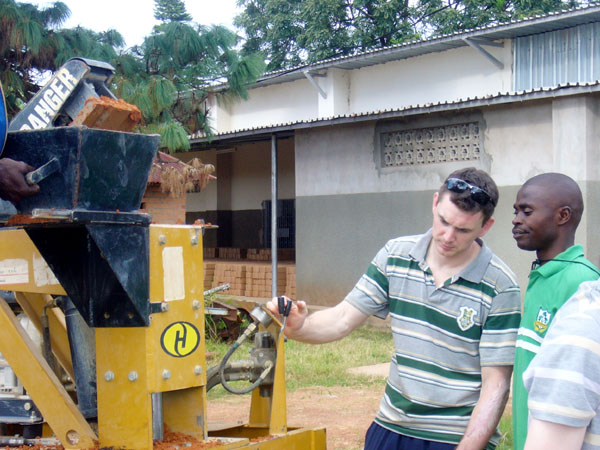 Working the controls of a brick-making machine. It can only make one brick at a time but it gets the job done 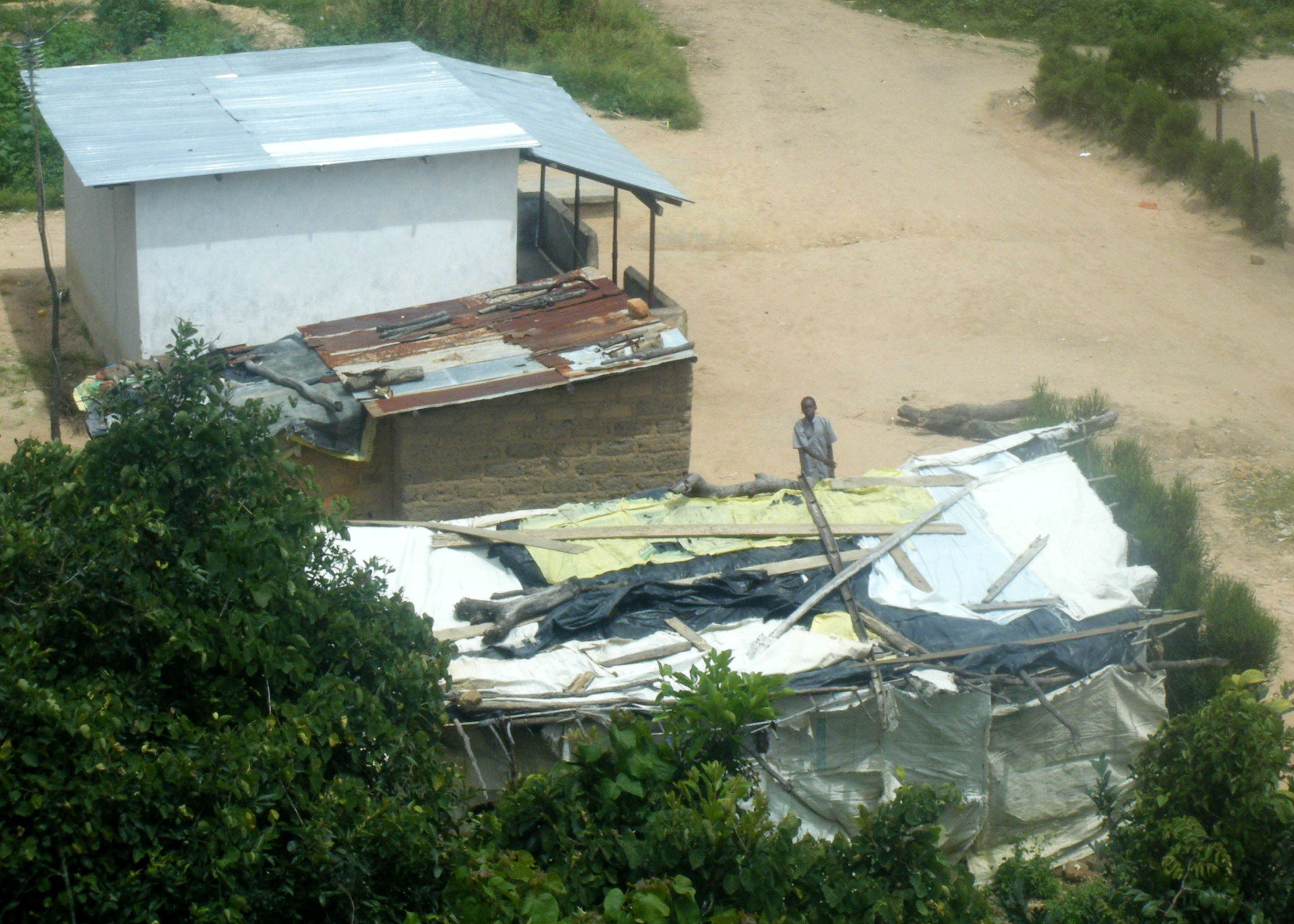 Dropping in for one at THE LOCAL! (building in the foreground!)

Don’t forget your shovel if ya wanna go to work! 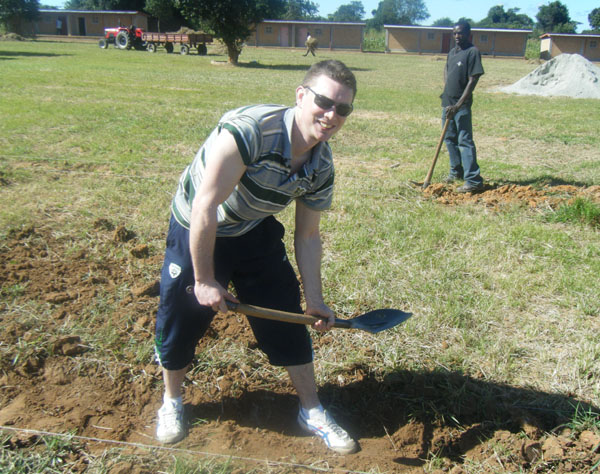 Martin – ready to take the plunge! 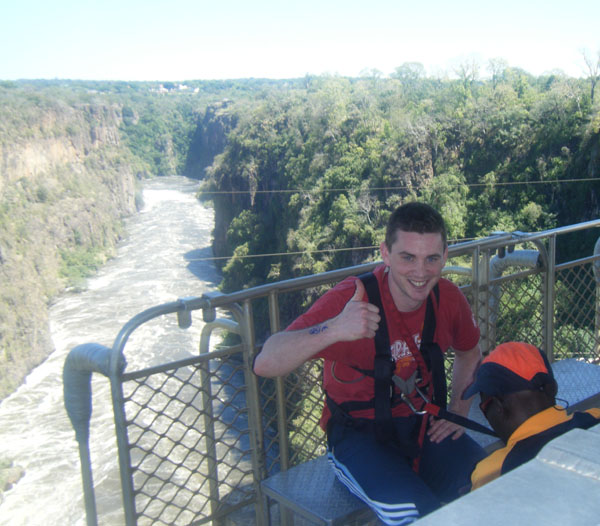 Preparing to take a bungee-jump! 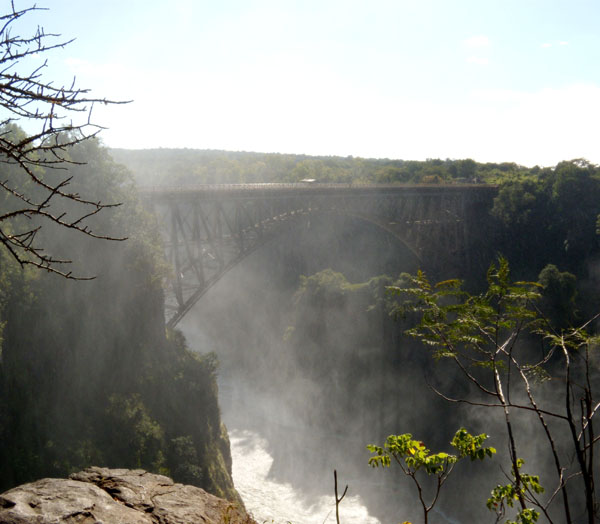 The bridge separating Zambia from Zimbabwe from which Martin took the plunge!

The chain gang! or should that be the ‘shovel’ gang?! 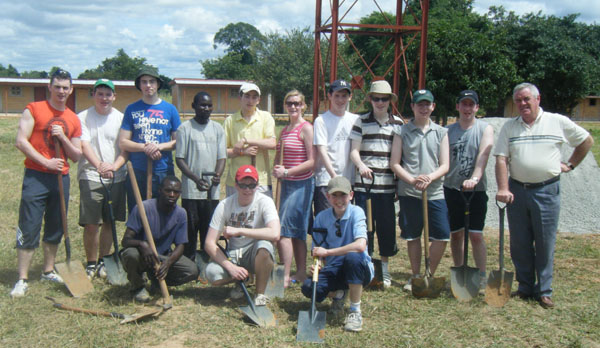 To view more of Martin’s Photos from his trip to Zambia go to our photo gallery or click on the following link:

Defibrillators Installed in the Community 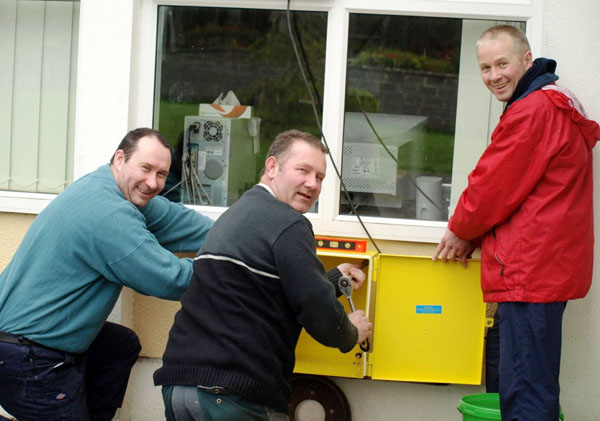 Tom Shanahan, Michael Ryan and Christy Reid hard at work installing the defibrillator boxes
Borrisoleigh Life Savers Action Group wishes to announce that the five defibrillators are now in place around the local community. They are located in The Marian Hall, Main Street, The Pavilion in the Town Park, St. Patrick’s Boys’ National School, Ileigh Church and at Currabaha Cross.

Local personnel are trained to use the defibrillators. In the event of an emergency first dial 112 to activate the ambulance service and then dial (086) 2 41 2 51 2; (remember it as 086 2 forty-one 2 fifty-one 2 !). This information will soon be distributed to every household in the parish. Sincere thanks to everyone who supported the provision of these life saving devices. 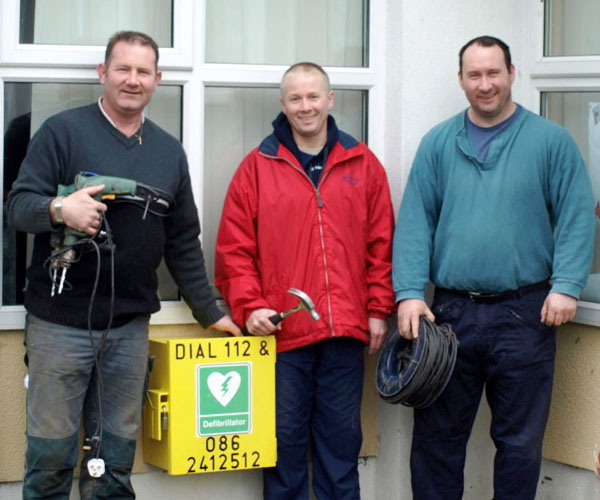 That certain look of satisfaction from the boys when a job is well done! Note the numbers to call:
Dial 112 to activate the Ambulance Service
then
Dial (2 forty-one 2 fifty-one 2) to activate the local defibrillator

Knock knock open wide – see what’s on the inside! 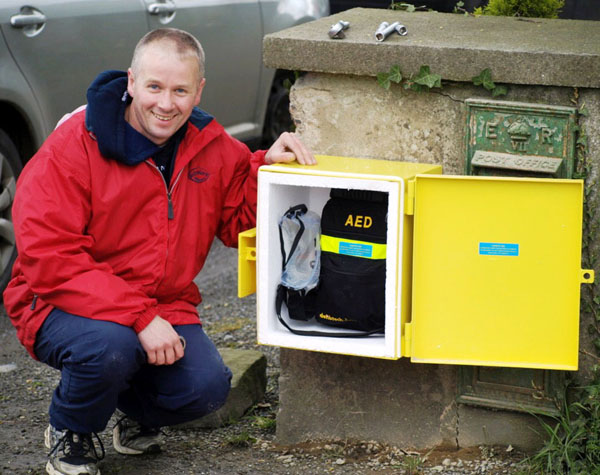 The first batch of trained ‘first responders’ in the parish 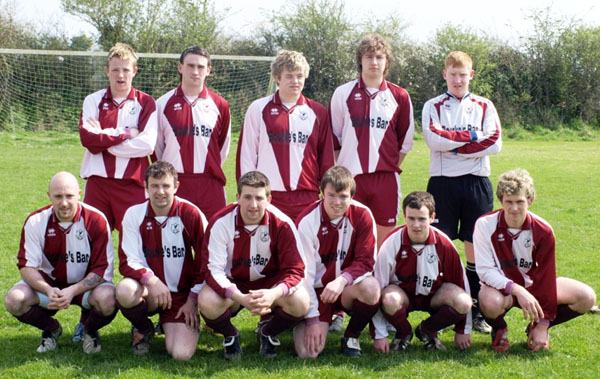 Last Sunday, the 19th of April, on a glorious afternoon in Bishop Quinlan Park in front of a larger crowd than usual, Borrisoleigh AFC clinched promotion to the Premier Division by winning the First Division title in nail biting fashion. Having to secure victory in our final game and hope our neighbors Sallypark would slip up away to Clonmore, not many would have given us much of a chance. But the sun shone brightly on Borrisoleigh that afternoon as Sallypark only managing a 3-3 draw left the door open for us to regain promotion to the top tier of junior soccer in North Tipperary. And we did so in terrific style, rounding of a great league capmaign with a resounding 10-2 demolition of Borrisokane. The match was one of the finest performances to come from a Borrisoleigh team, and those in attendance and players alike will have little fear heading up to face the elite of North Tipp soccer next season.

With the league title in the bag, Borris are still involved in two cup competitions and are hoping to achieve a fantastic treble this season. Our next game is a quarter final of the Tipperary Cup away to Clodagh Rangers this coming Sunday.

And we have already qualified for the final of the Barry Cup which we won last year. A date has not been set for the final yet, but will more than likely take place early in May against Nenagh Town B in the greyhound track in Thurles. It would be great to have a big following for the final and we will have posters out when we receive a date for the match.

The club would also like to thank everyone who bought a ticket for our "Evening With Jeff Winter". It was a fantastic night as Jeff told us some funny and fascinating stories of his time as a top Premiership referee. And a good night was had by all. 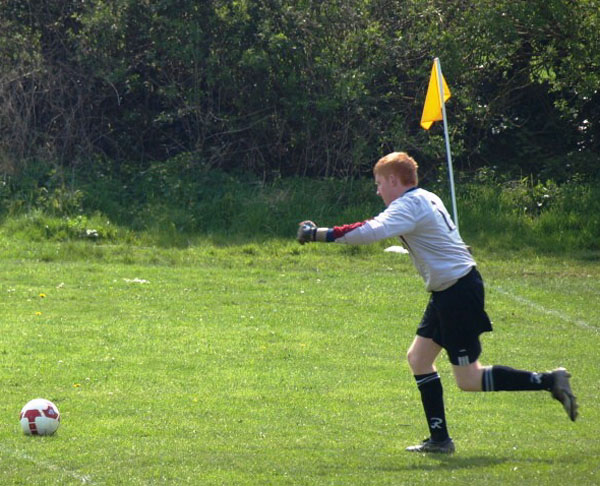 Gerry Treacy shaping up for the kick-out! 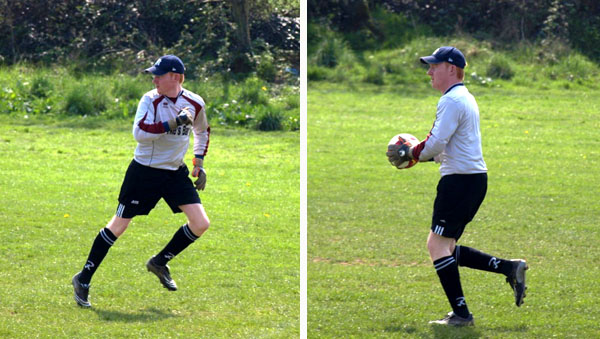 Gerry racing back to his line and preparing for the long kick-out! 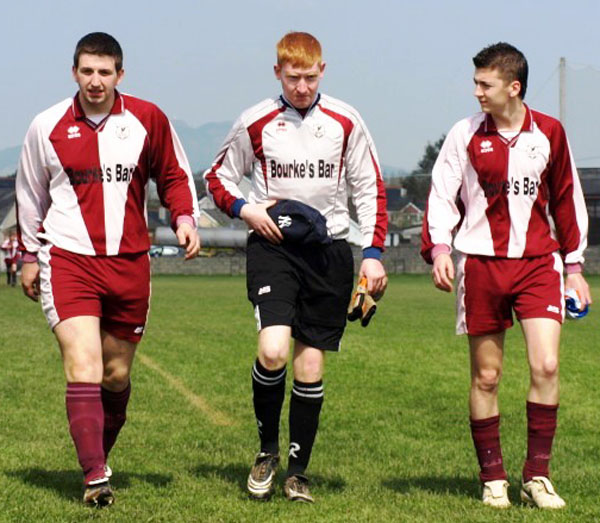 No way we’re losin’ this one lads!

A man with a mission! 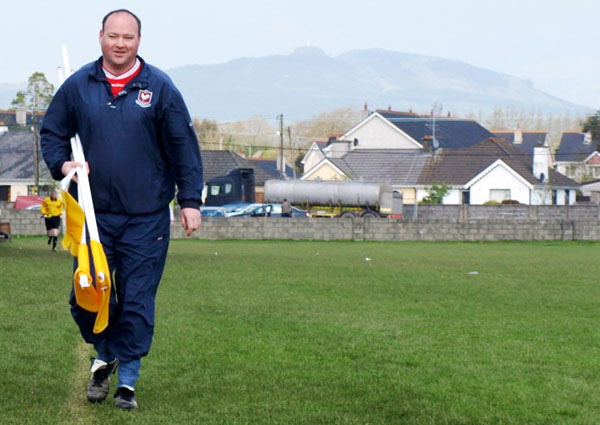 An ‘Oldie’ goes quad-biking with the Youngs! 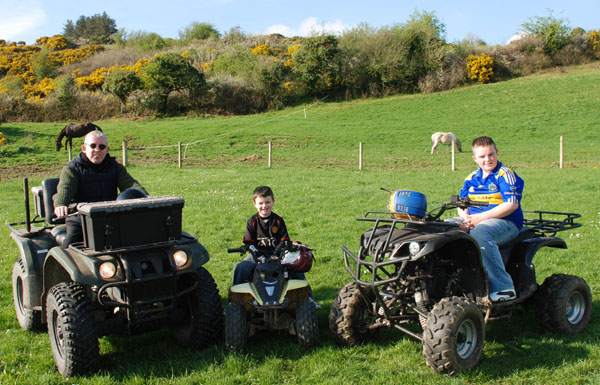 Fr. Michael is pictured here with his new quad-biking buddies Paudie and Josh Young of Knockwilliam, Borrisoleigh. All three took advantage of the Sunday Sunshine last weekend. The hilly terrain proved to be ideal for all sorts of stunts and antics! The local curate learned a few new tricks from these hillbillies who both know a thing or two about CCs and four-wheel-drives! Harry’s bike was in for a check-up but will soon be back in action – he reckons he can take on the local ‘oldie’ and win!!!


Victory in the Munster Junior Plate

Thurles Rugby Club, captained by Ollie Small, were victorious in the Munster Junior Plate on Sunday last 19th April. They defeated Skibereen 13-11 in Musgrave Park. Also on the team are two other Borrisoleigh natives Wayne O’Mahoney and Aidan Dwyer who kicked 8 points on the day.

Eyeing up the goal! 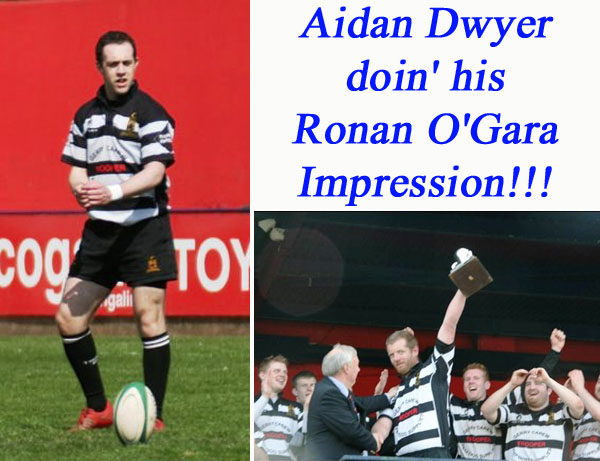 It’s all about getting the stance right! Aidan Dwyer goes through his pre-kick routine before scoring at the Munster Junior Plate Final while the victors claim their prize after their great win. 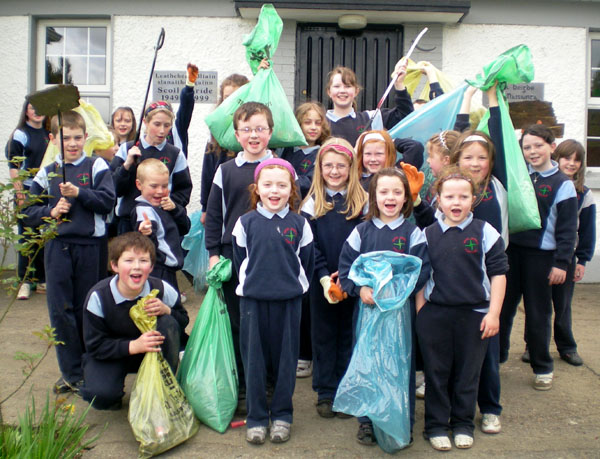 Pupils of Scoil Bhríde, Fantane tidy up the neighbourhood during Spring Clean Week!

Parents wishing to enrol their children in Scoil Bhride, Fantane, may contact the school at 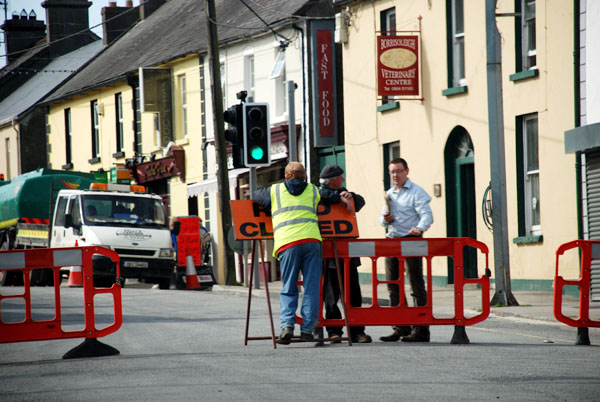 Sean O’Shea makes his way through the barricade!
Since Monday the 23rd March, there has been much work undertaken on the streets of the village. The long awaited road resurfacing is finally near completion and within the proposed period of five weeks! People will soon be able to return to taking the more direct route to their destination. Hopefully this surface will last well for many years, meaning an end to potholes on our streets. If anyone went up the street by mistake during the works they can always say the sign was obstructed!!!
Marian Hall Lotto 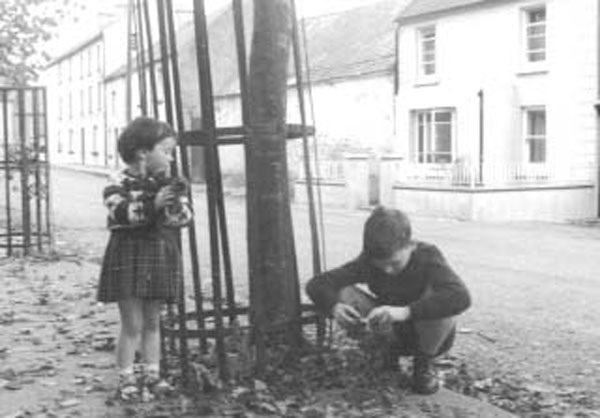 Anne and Tom Leahy (Jnr.) Pallas Street, gathering up the leaves.
Your Website Needs You!

Send your email to: info@borrisoleigh.ie Also, if you like what you see and want to leave a comment, remember to use the Guestbook!