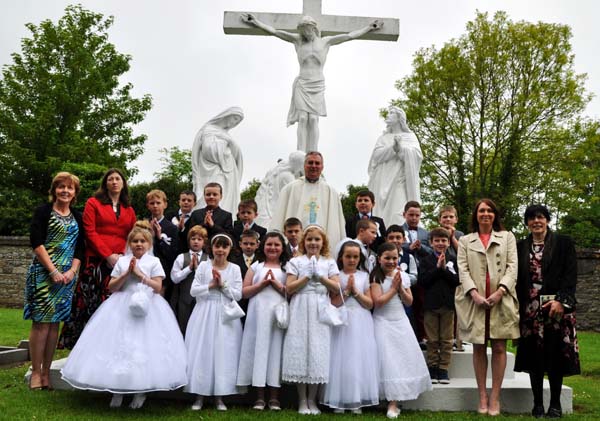 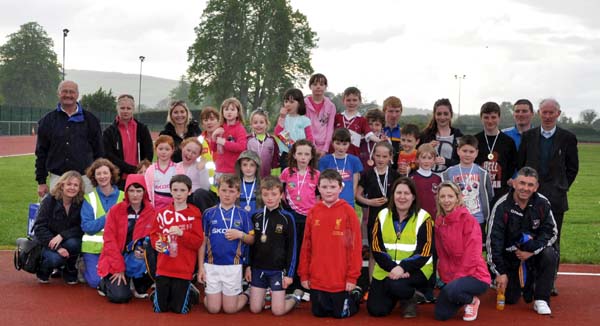 The Borrisoleigh Community Games track event was held in Templemore on Sunday 18th May.

The results on the night were as follows:

Thanks to everyone who took part and to all those who helped out on the evening. The children had a great evening. Best of luck to all those who go through to the County Finals, which will be held in the Templemore track on 22 June. 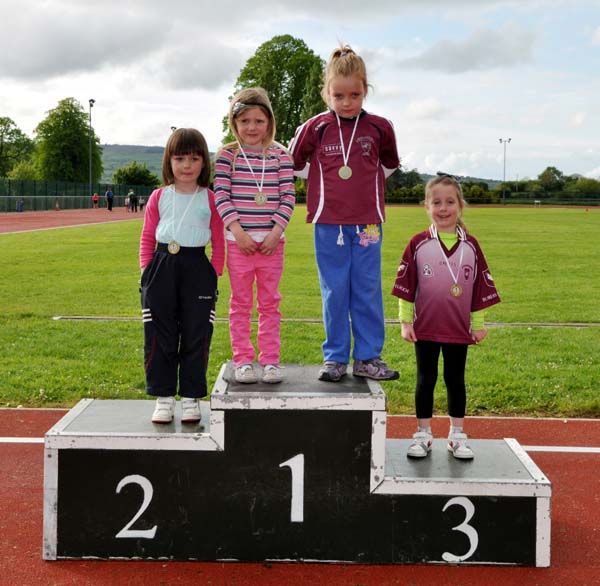 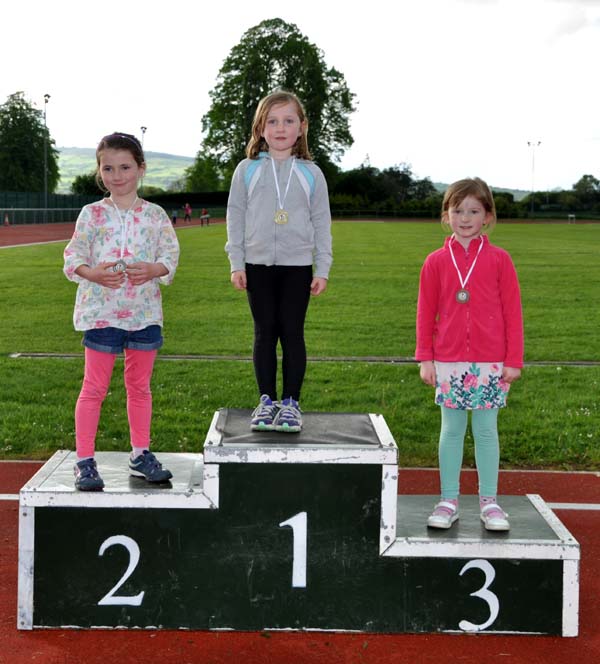 More photos from the event are available in a Gallery

The Cashel and Emly Diocesan Pilgrimage to Lourdes takes place in June. The Borrisoleigh Lourdes Invalid Fund will be holding their Annual Church Gate Collection on Saturday and Sunday 7th and 8th June in Borrisoleigh and Ileigh. Your support would be gratefully appreciated.
St Patrick’s BNS 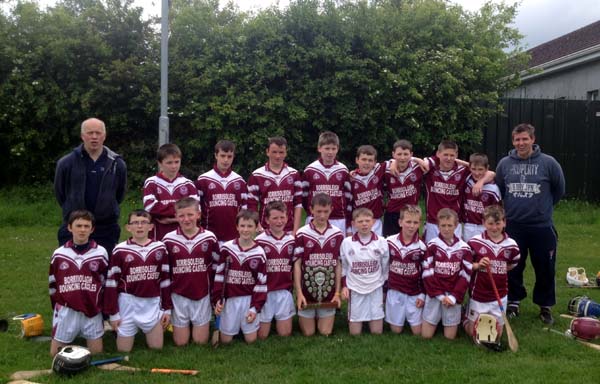 St. Patrick’s B.N.S. beat Dromakeenan N.S. last Thursday in the North Final of the U-13 primary schools championship. The Borris boys came out on top after a very keenly fought match. At half time Borris led by just a single point, however a very strong final 10 minutes saw St. Patrick’s run out winners on a scoreline of 2-12 to 1-08.

This win meant that our boys have done the double this year having won the Football championship before Christmas! The mentors, teachers and parents of the boys are very proud of them and wish them the very best of luck in the County Final which will be on the 17th or 18th June where they join their younger school mates the U-11’s. Comhghairdeas!! 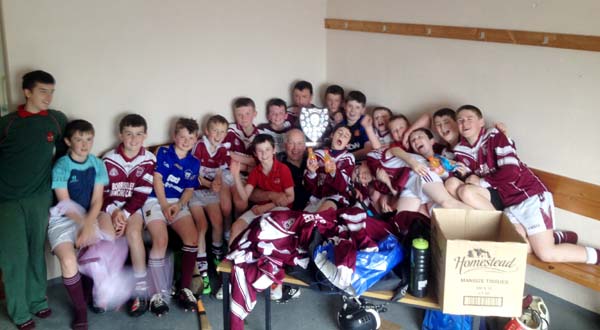 We are the Champions!
Primary Game Representative

Congratulations to Kevin Maher, a sixth class pupil of St. Patrick’s BNS who is playing for Tipperary against Limerick in Semple Stadium this Sunday. It’s great to have another Borrisoleigh man representing his county this weekend and we wish him and the senior boys the very best of luck. 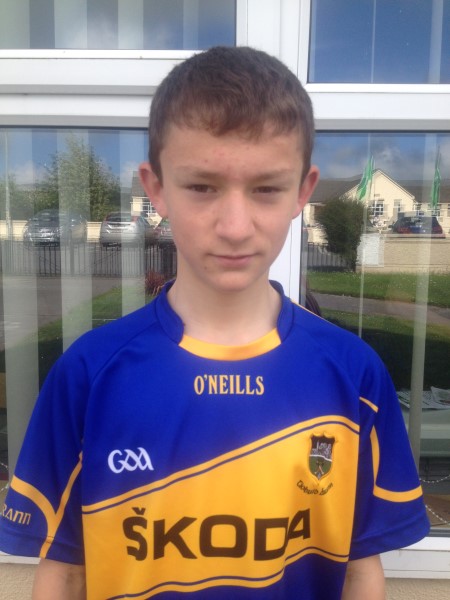 St Cualan’s Club
The committee of St. Cualans Social Club are holding a tea/coffee morning in the Community Centre Borrisoleigh on Thurs June 5th after 10am Mass. So if you would like a cuppa and a chat you would be most welcome.
Happy 90th! 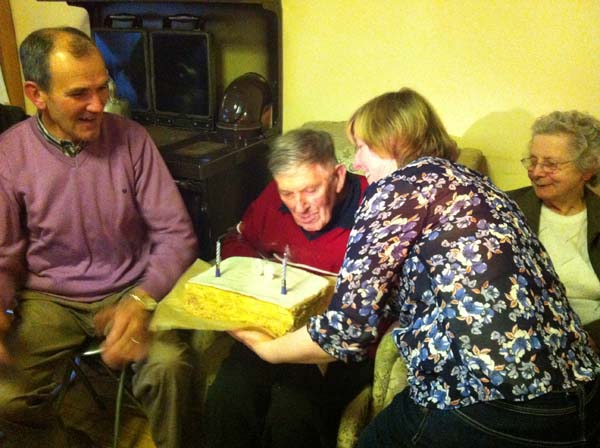 Tipperary Draw: The 2014 Tipperary Draw commences this coming week. It is a great source of income to the county and to the club. If you are interested in joining up or have not renewed your membership please contact TF Stapleton
Intercounty: Best of luck to Paddy Stapleton, Conor Kenny and captain Brendan Maher and all the Tipperary lads who take on Limerick in the Munster Semi Final on Sunday. The game will take place at 4pm in Thurles.

For all other club news, fixtures, photos and reports check out www.borris-ileighgaa.com 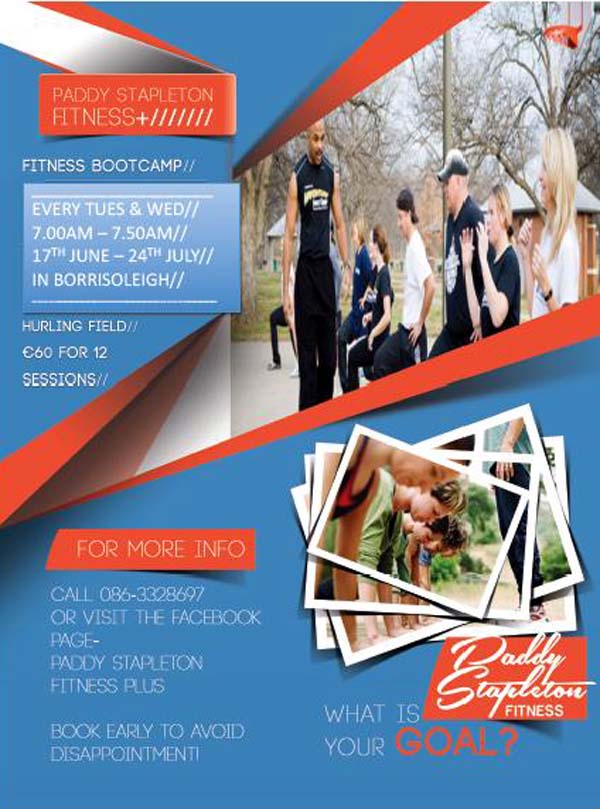 After our recent AGM the new elected Scór Committee is as follows:

JUVENILE:
U6/U8
Training times for next week will be text to parents. For health and safety reasons, parents are asked to stay to supervise children at this age level. Help is always needed. If any parent would like to be involved with the coaching of these teams, please let any committee member know.

U8 Blitz in Toomevara on this Saturday. Best of luck girls.

U10 girls had a great win over Drom last week in a challenge game. The girls played some great camogie and hope to continue with the winning streak.

U13’s competitions continue and unfortunately the girls were beaten by Moycarkey in the second round of this competition.

However, on Tuesday last, Borris-Ileigh was victorious over Templemore in this competition. Winning with a score line of 3-1 to 1-6. Both teams were neck and neck throughout, but a fantastic goal from Aoife Ryan in the last minutes of the game, made this u13 team winners by one point. Scores from Gretta Atik (1 g), Ciara Doolan (1 g) and Aoife Ryan (1 g, 1 p.)

INTERMEDIATE LEAGUE
Semi-Finals date and venue has yet to be announced. Details will follow shortly.

The Linda O’Connor Tournament is set for this Saturday 31/05/14 at 10.30 in the park. Visiting teams to be announced. This is always a great display of camogie, and all support would be most welcome. 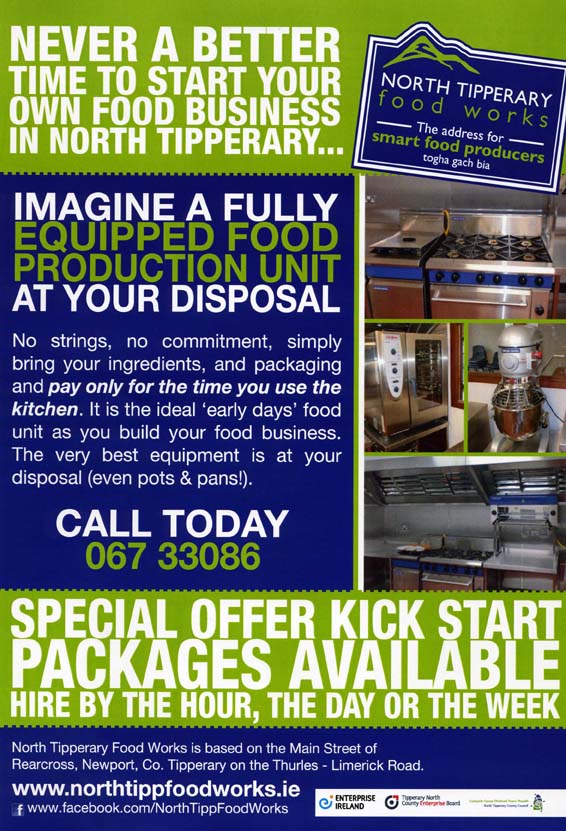 In the current climate many people are finding themselves in a position to start a food business, but are finding it difficult to find premises with a reasonable rent and the support they need in accessing funds and information. North Tipperary Food Works provides these premises and the support needed to get your business off the ground. We supply our tenants with a ready to go, prestigious, food sector workspace and learning centre at extremely competitive rates. We also have available 1 fully equipped time share kitchen, meeting rooms for training and courses and 2 office spaces. 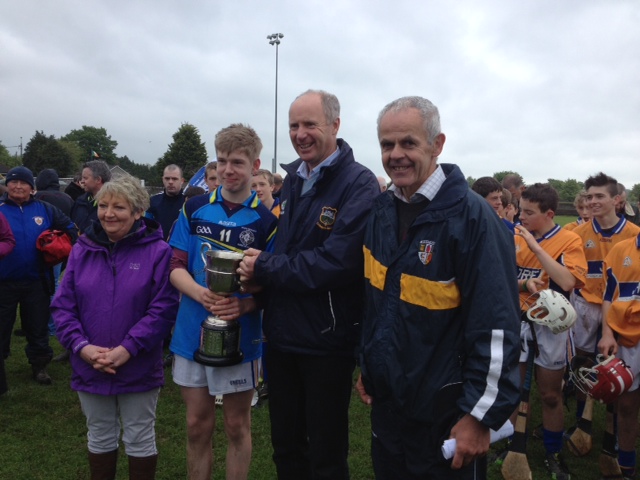 Our U10 ½ Community Games hurlers play Toomevara in the area final on this Tuesday evening best of luck to all concerned.

Last Saturday we hosted the annual Peadar Cummins Tournament. On a wet morning North Tipp faced Mid Tipp in the first semi final. A determined North Tipp team put the pressure on from an early stage. With Alvis Danko and Brian McLoughney linking up well in the inside forward line the North opened up a good lead by half time. In the second half North Tipp with Oran Bergin leading from centre back defended well and kept the mid tipp scores to a minimum. A well taken goal by Alvis and a point from Captain Raymond McCormack in the final quarter sealed the win for the North on a scoreline 3-10 to 8 pts. The second semi final was played in the Ragg where the South defeated the west by three points.

Due to the weather conditions the shield final was switched to Durlas Óg pitch in Thurles where the West defeated the Mid by 3 points.. Thanks to Durlas Óg who accommodated us at short notice. The tournament final v South Tipp was played back in Borrisoleigh and again the North raced into an early lead with a brace of goals by Brian McLoughney, further points including 2 from Ray McCormack meant that the North had an 2 -10 to 1pt lead at the interval. North Tipp used their panel of players during the second period with Aaron Rabbitte playing his part also in the final quarter.

PJ Ryan on behalf of Borris-Ileigh Juvenile Club thanked the players from the four divisions, their mentors the Divisional Boards and the Co Boards for making the tournament a success. Joe Kennedy proceeded to present the cup to local man and Captain Ray McCormack. This was a huge honour for Raymond and the Club on the 30th anniversary of the tournament. Well done to Ray, Oran, Alvis and Aaron who all contributed handsomely to the North Tipp victory and represented our Club well on the day. Thanks to the Committee members also who supplied , prepared and served the refreshments on the day.

Our U14’s also played Lismore at the weekend in a challenge game. Thanks to those who supplied and served refreshments for the travelling party also. This week sees the commencement of the U14 hurling championship where we are away to Moneygall/Templederry in Templederry tonight Wednesday and the U12’s are home to Silvermines on Friday evening.

Best Wishes to Kevin Maher who represents St Patricks Boys N.S in the Primary game in Thurles next weekend. Best wishes also to Brendan, Paddy and Conor in the Senior game against Limerick. 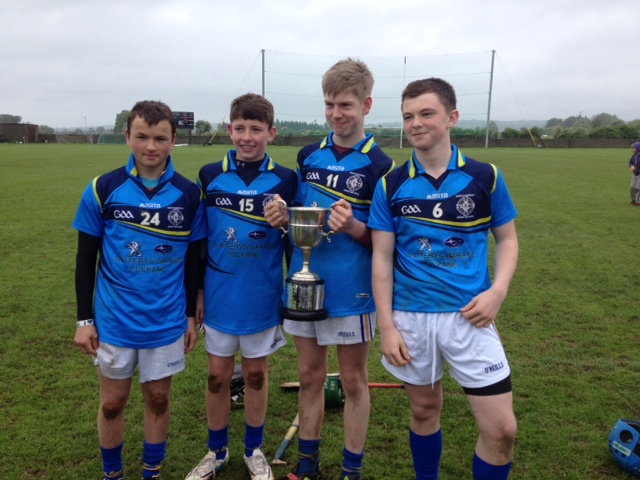 The Borris boys with the Cup

The very best of luck to the members of the Borrisoleigh Cycling Team who are taking part in the Mizen Head to Malin Head charity cycle this weekend. This is a distance of approx 650km. Safe journey!
Text Alert Signs 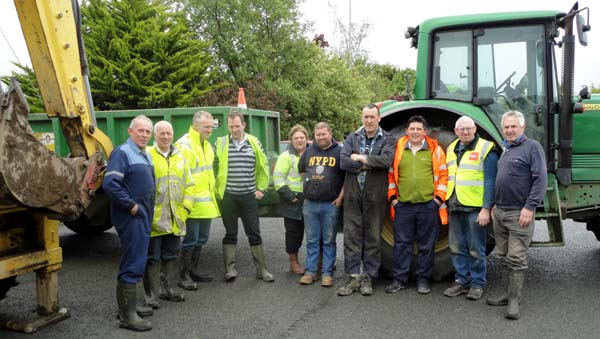 Borrisoleigh Text Alert committee put up the blue painted poles that will carry the Text Alert signage on Saturday last. The poles were placed at strategic locations around the parish. Great credit is due to the committee who worked so well together, and had some fun along the way as well!! 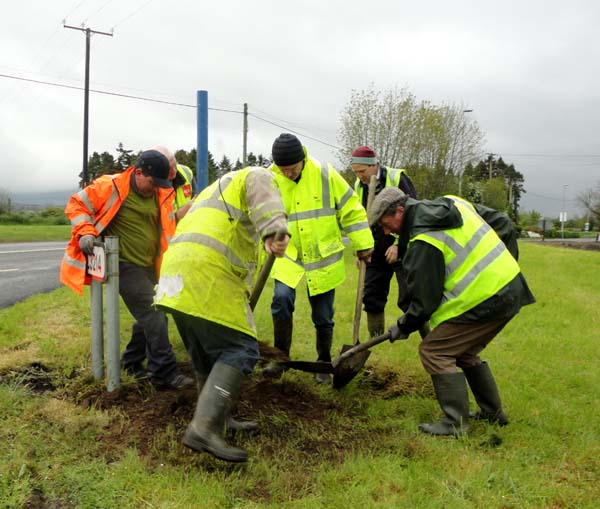 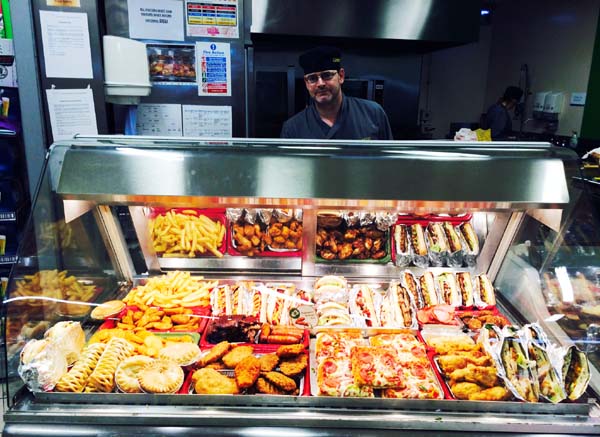 Emmanuel Maher on duty in Centra

Pictured above is Emmanuel Maher behind his usual display at the deli in Shanahan’s Centra. Emmanuel has been short-listed in the top 5 fresh food managers of the year. This is a very prestigious award run by Shelf Life magazine. Emmanuel with his wife Ruth and daughter Anna Louise, formally from Offaly now reside in Upperchurch. Emmanuel has played a major part in all the awards achieved at Centra Borrisoleigh along with a great team who support him all the way. Sean and Marie Shanahan with all the team at Centra wish Emmanuel all the best in the final on Thursday, we are very proud of his qualifying in the top 5 – MAJOR achievement, congrats!
Advertising/Diary of Events 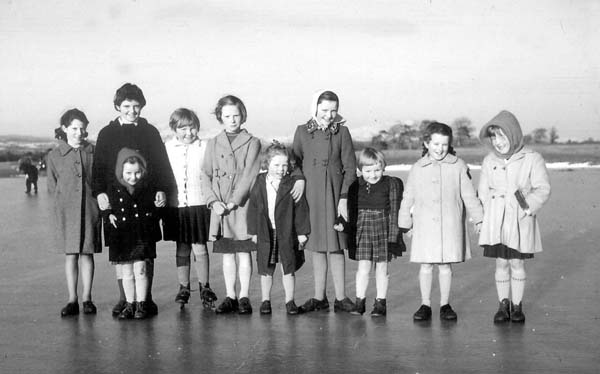