Launch of the Inaugural Borrisoleigh Annual 2011 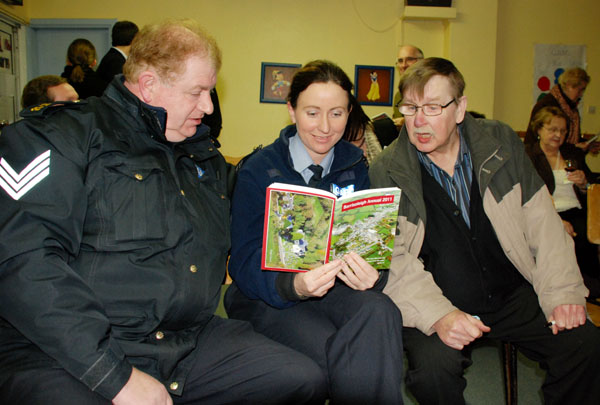 The launch of the inaugural Borrisoleigh Annual took place on the 15th December 2011 in the Marian Hall. The back room of the hall was at capacity and the mulled wine (prepared by Ruairi O’Connell) and donated by Gleeson’s went down a treat with the cheese donated by the Creamery.

The Borrisoleigh Community Development Association would like to thank all those who helped in the preparation of the Annual, the Community Centre and the Marian Hall for the use of rooms, those who submitted articles, the website for advertising and the many local businesses for stocking annual. The Annual is available for sale (cost €7) in Shanahan’s shop, Hurley’s shop, Chemists, Joe Loughnane’s pub, Stapleton’s pub, Walsh’s shop, Creamery, O’Dwyer’s butchers and Coffey’s pub. This would make a great Christmas present for only €7. We hope you all enjoy reading the various articles. 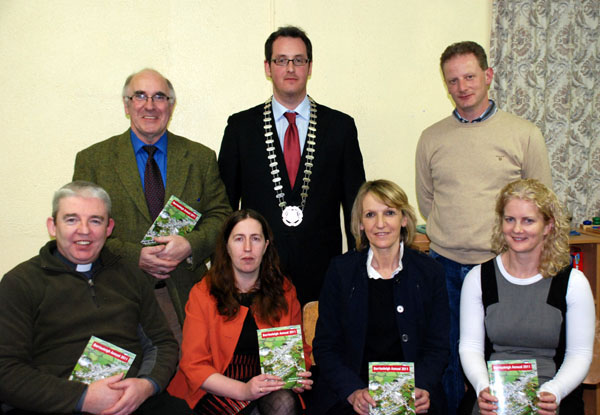 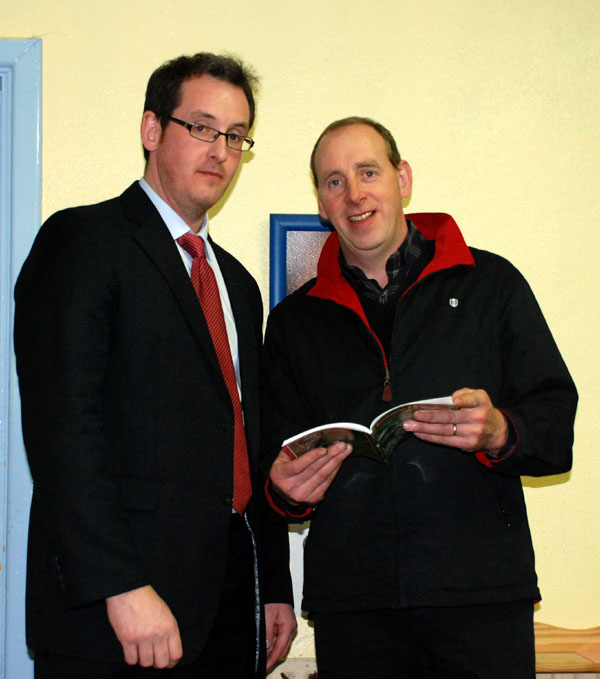 Mícheál Lowry and Tom McGrath checking out the Annual 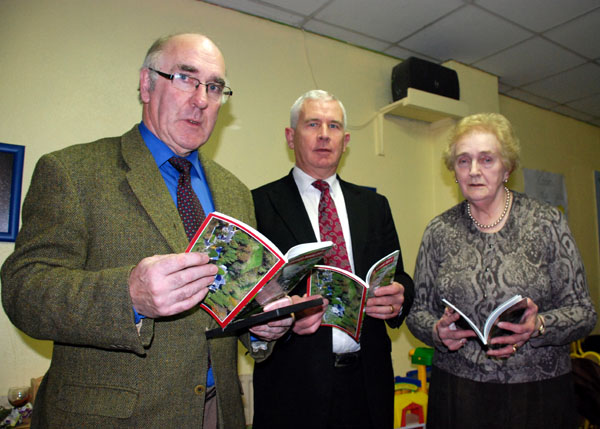 Michael Delaney, Cllr Eddie Moran and Mary Lanigan Ryan having a quick glance at the launch 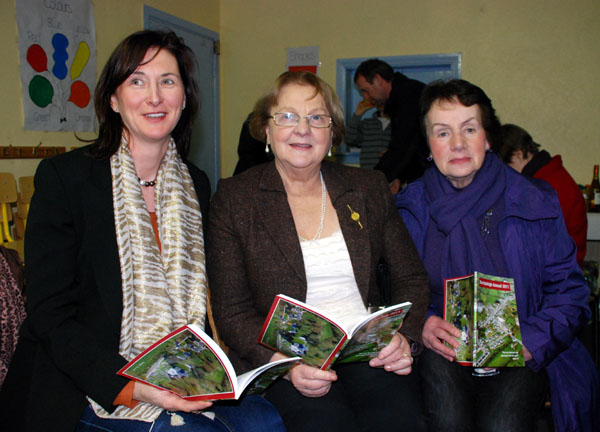 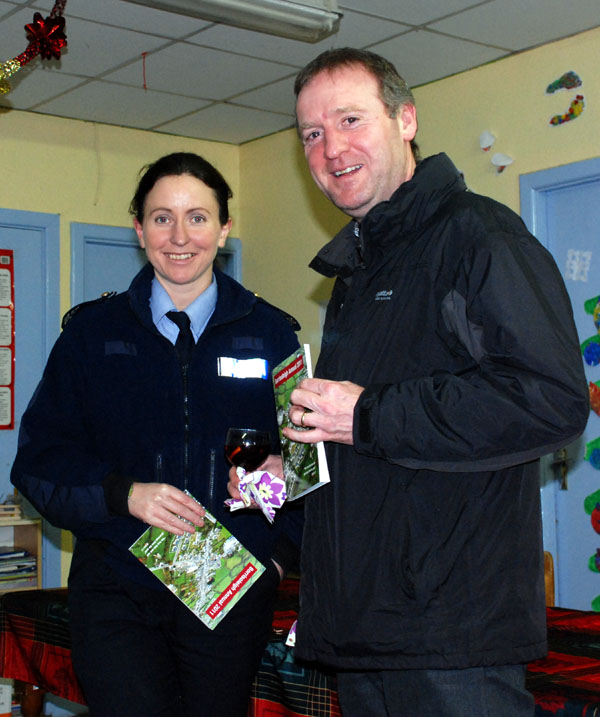 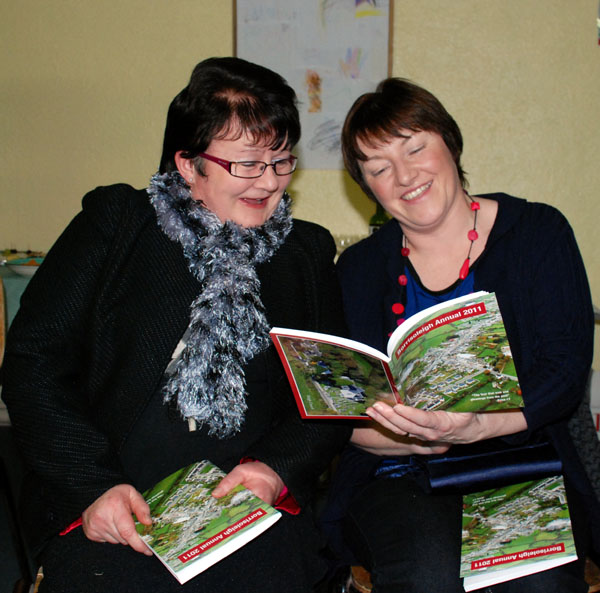 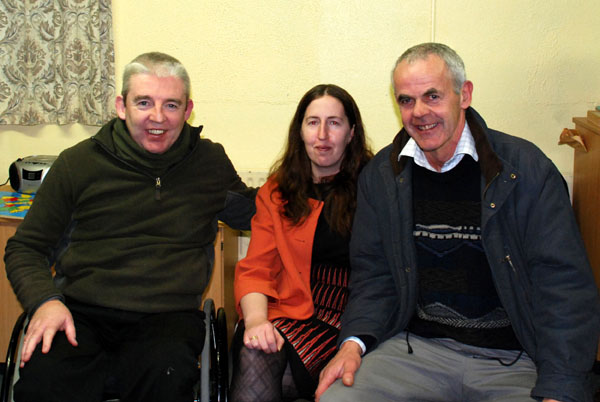 Congratulations to our Prizewinners 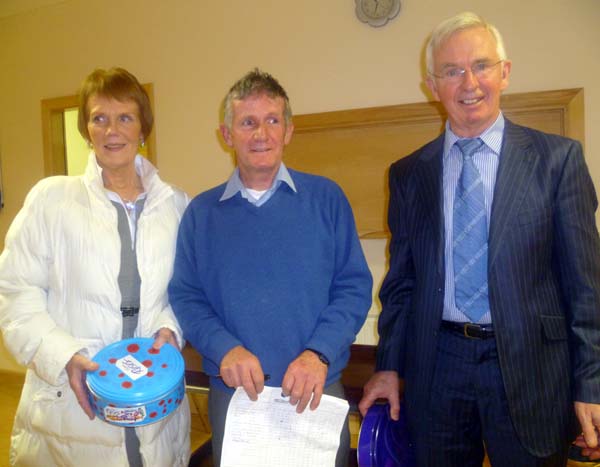 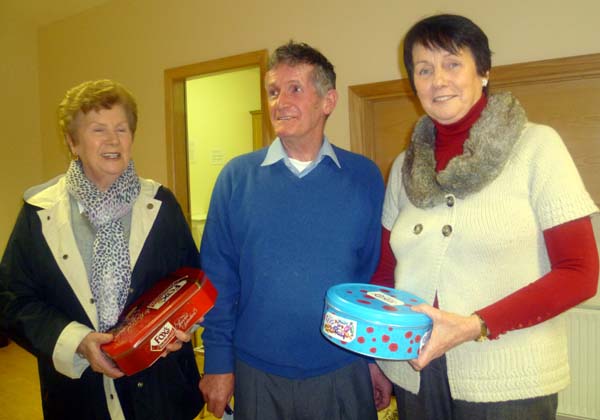 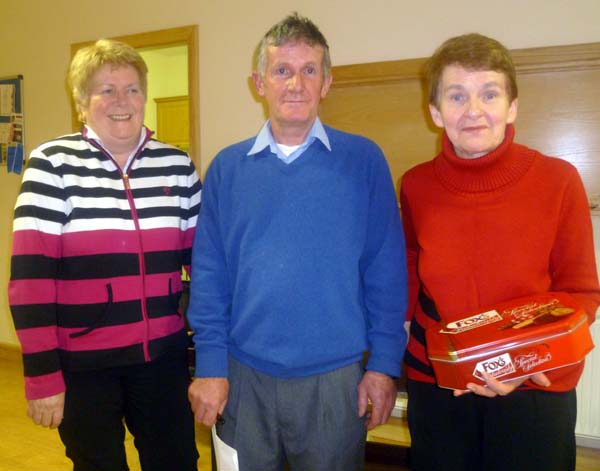 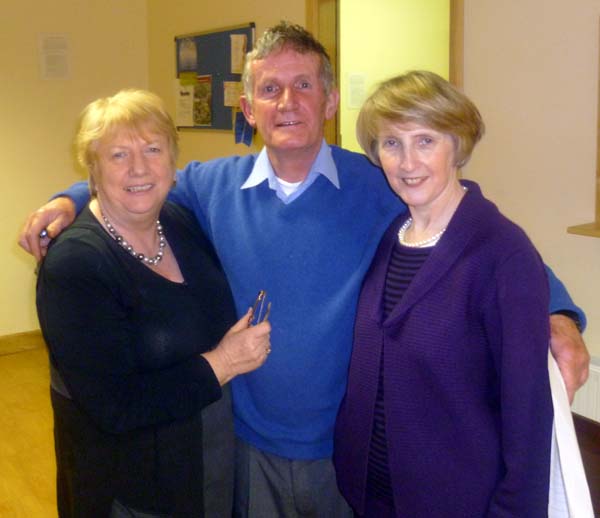 Thanks to all who took part in Bridge lessons during the past few months. A sincere thank you to Pat Finn our tutor and also to all our friends from Thurles and Templemore who travel every Thursday night to join us in the Community Centre. Bridge lessons will resume in January. Full details will be given at a later stage. We wish you all a very happy, peaceful and holy Christmas and look forward to seeing you all again in 2012.
From all the Borrisoleigh bridge players.
Scór News

Scór would like to wish everyone a very Happy Christmas and Prosterous New Year. The club would like to wish Orla Ryan the best of luck in the Munster Semi Final of Scór Na NÓg on Saturday 7th January 2012 in Tallow Co. Waterford.

Parish Scó Na Bpaistí will be held on Sunday January 15th at 2pm. Set dancing clases finished on Monday night for the Christmas Holidays with a very enjoyable party for all the children.

Set dancing will resume again on January 9th 2012 at the same times.

Borris-Ileigh GAA News  Our AGM was held on the 11th December last. The following officers were elected for the coming year 2012.

We congratulate Gerry Treacy on being elected as our new Secretary and wish him the best of luck for the coming year. To all our new managers and selectors and all the various teams we wish you well in 2012.  Their is one vacant position for Manager of the U21 team, so we welcome nominations for this position at our ajourned convention which will be
held in the pavilion on Saturday the 21st. January 2012 at 8.30pm.

We would like to wish everyone a Merry Christmas and a Happy New Year. The Club extends its deepest sympathies to the families and relatives of loved ones who sadly passed away during the year. Ar dheis de go raibh a anamacha dilis. 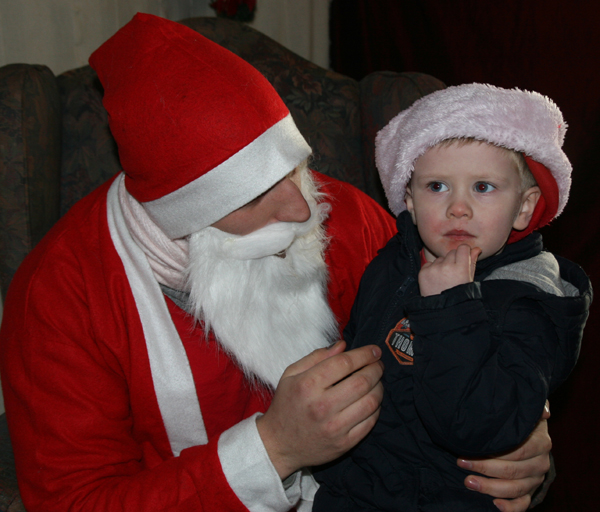 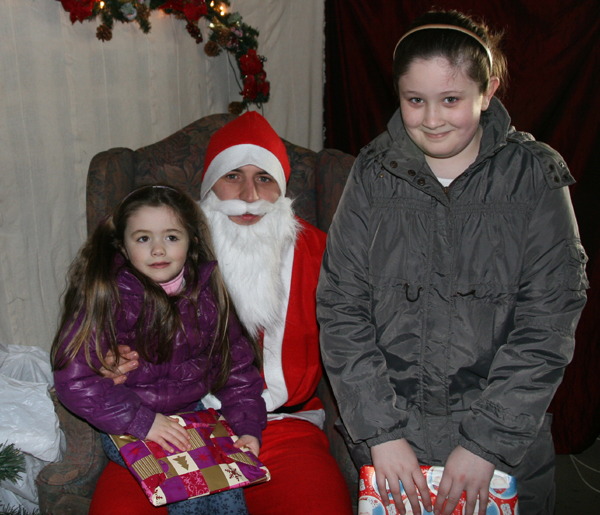 Ella and Laura get gifts from Santa 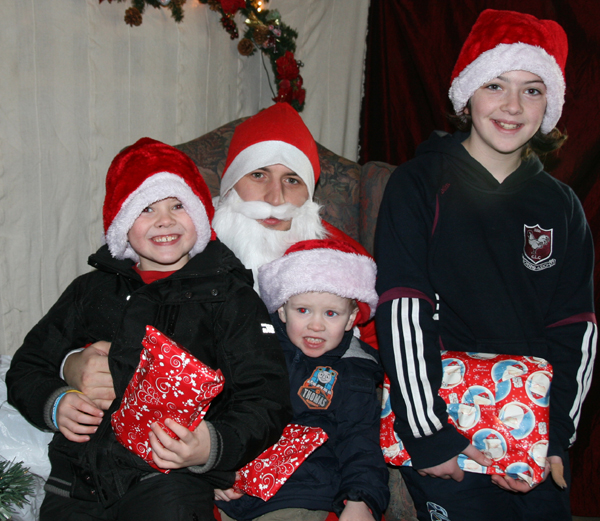 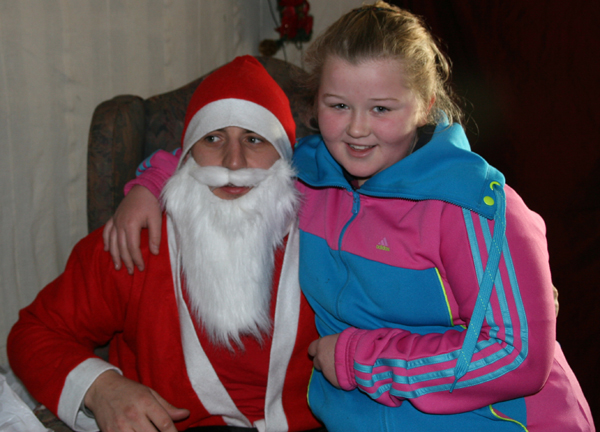 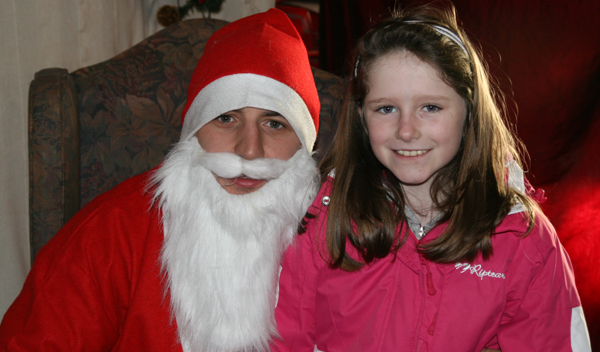 Dearbhla made great friends with Santa 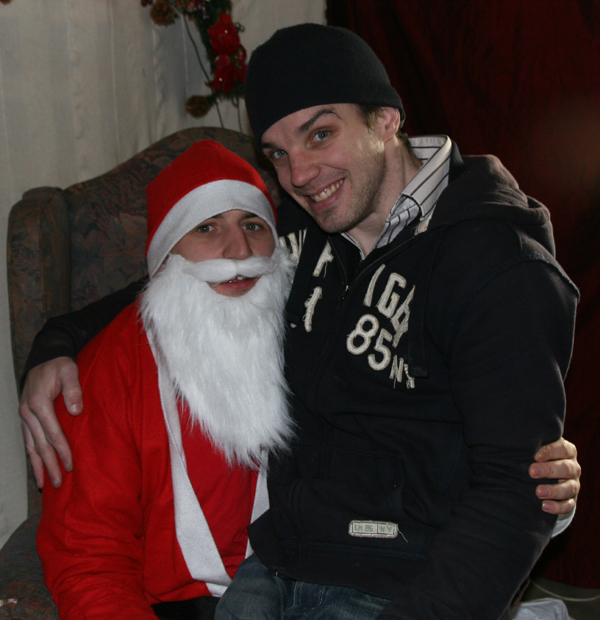 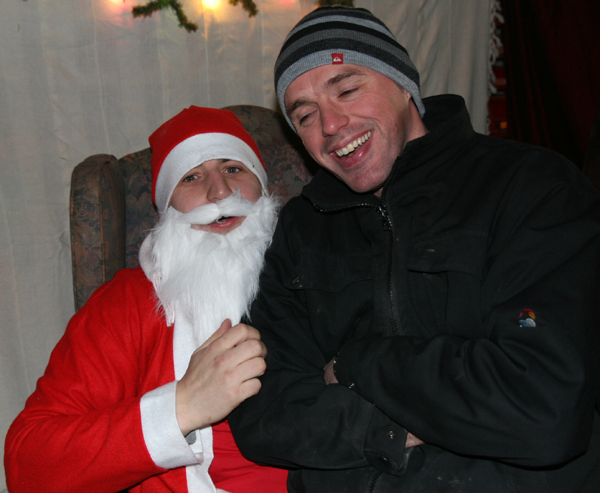 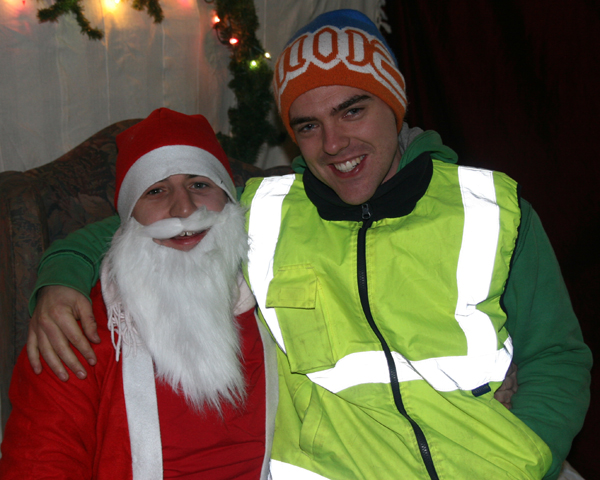 Santa had also time for some of the big children in Borris.  Brendan, Aidan and Toby all promised to be good boys during the festive season !!

On November 20th in the Dome adjacent to Semple Stadium, Thurles, Matt Stapleton of Pallas Cross was honoured with a Sean Ghael Award. From his youthful days at Thurles CBS where he won Rice, Croke, Dean Ryan and Harty Cup medals, Matt’s hurling talents were quickly recognised. He won North minor hurling honours with Borris-Ileigh and caught the eye of the county selectors which saw him win Munster and All Ireland medals in 1958. An athletic defender, Matt commanded a central position in the half back line where he gave many memorable displays. He had a great sweeping style with sure striking and a keen hurling brain.

Following some masterful displays with Borris, Matt was called up to the Tipperary senior panel in 1968 and went on to win a National League medal, Munster senior medal and Oireachtas honours. An unfortunate football accident in the same year when Matt suffered a broken leg cost him a place on the team when he was producing some of his best ever hurling. Many followers hold the view that this may have cost Tipperary the 1968 All Ireland which they lost to Wexford.

Matt won 3 North Senior hurling medals and a Junior Football medal with Borris-Ileigh and also trained the club’s Under 21 team to county glory in 1969. He always put his shoulder to the wheel in helping Borris-Ileigh in every way. He is a genuine and worthy recipient of a Sean Ghael award. 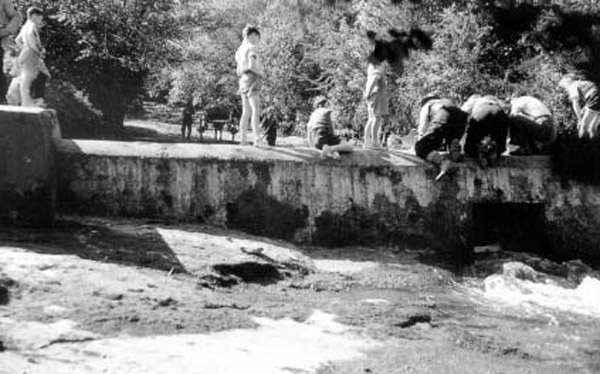 Cleaning in progress at the Sandtrap
Council workers opening the trap-door at the Sandtrap, to facilitate the removal of the sand and gravel
Your Website Needs You