Borris-Ileigh’s match v Annacarthy will take place this Sat April 18th at 7p.m. in Borrisoleigh. Your support would be appreciated.

U16’s played Moycarkey on Monday last. This was a tremendous result for the girls, winning this match with a score line of: 6-20 to 0-01.
Scores from: Aedín Hogan 5-17, Aoife Ryan 0-01, Kate Delaney 1-00 and Tara Mockler 0-02. Fantastic result and well done girls.
Next match v New Inn at home next Monday April 20th. 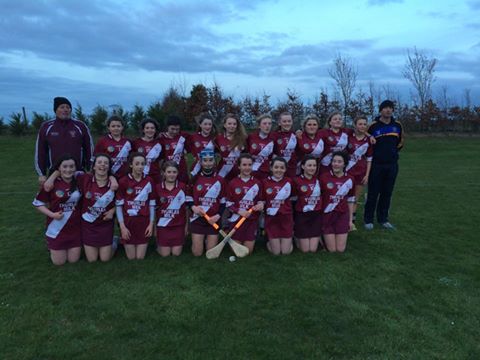 U14’s played Gortnahoe on Wednesday April 8th. The girls played well, but unfortunately they lost out narrowly by 2 points on this occasion. Scoreline of : Gortnahoe 2-00, Borris-Ileigh 1-01.
Scores from Aoife Ryan 1-01
Next match on Weds April 15th v Thurles (home). Best of luck girls.

If you intend to train or play with Borris-Ileigh Camogie Club this season, you must be registered. It is essential to contact Paula Ryan (087 9035949) Club Registrar or your team manager to arrange payment of membership and collection of our Code of Ethics, Conduct and Best Practice. It is vital that everyone involved in the club is familiar with this document. 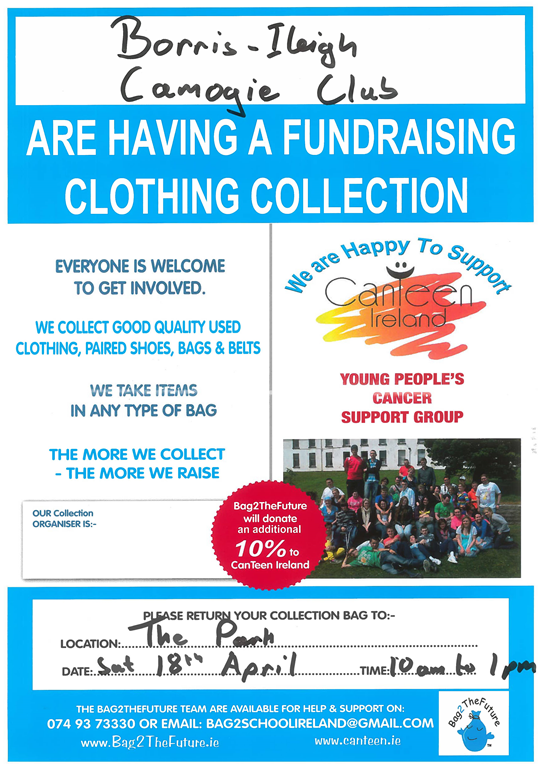 You are Invited for Tea and Bikkies!!
In aid of Paws Animal Charity

Senior Hurling: Our senior hurlers take to action again on Sunday 26th of April in Nenagh against Kilruane McDonaghs. This game will be round two of the county championship and a good result here will be vital to our chances of progression to the latter stages of the county championship. As it stands Kilruane have two points, with Drom and ourselves on one each while Burgess are on zero. A great crowd attended the game in Dolla against Drom and we hope to see the same and more for the game on the 26th. We encourage all members and supporters alike to make the effort to shout on the lads. Our game against Burgess will take place on the weekend of the 3rd or 10th of May depending on how Tipperary fare against Waterford.

Inter-County: Best wishes to our three representatives on the Tipperary team; Brendan Maher, Paddy Stapleton and Conor Kenny in their league semi final against Waterford on Sunday in Nowlan Park. The game throws in at 4pm and is the second match of the semi finals.

Junior Hurling: Our Junior A team had a fine performance against Roscrea in the first round of the league. In a tight game where we were in control for most of it we ended up drawing the game after a strong Roscrea fightback. This weekend sees a busy few days for both our junior teams. On Friday night our Junior A team travel to Toomevara to take on Toome in round two of the junior league, throw in is at 7pm. On Sunday morning our Junior Bs host Borrisokane at 11:30am. As always your support will be greatly appreciated.

Track Attack: Best wishes to the Track Attack team as they embark on their “147” fundraiser. The funds raised will go to the upkeep and further development of the track which include widening, extra lights and an extension of the track to 1 mile. We ask that all people support this fundraiser as the track is a huge benefit to the community and we would like to stay providing such a great service to the parish, but it is only with your help that we can do it. It is scheduled to take place on the Monday evening of the June Bank Holiday weekend. 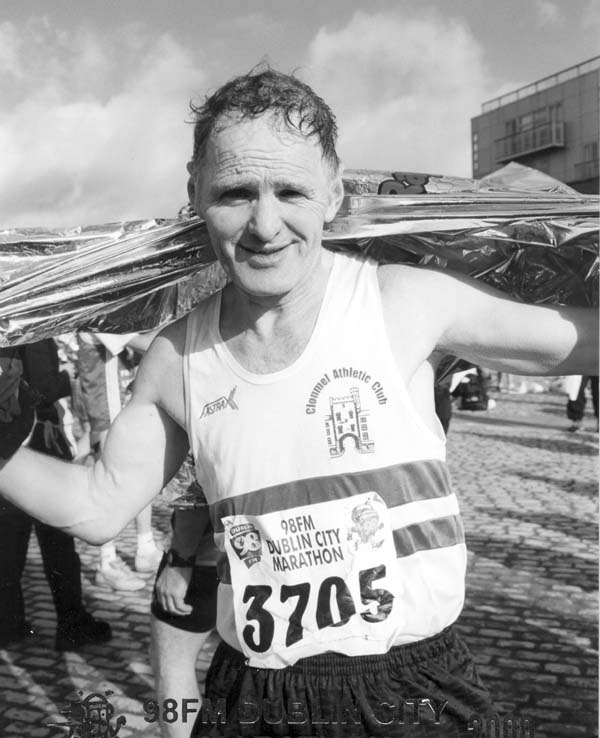 Paddy Dolan, after completing one of his many Dublin City Marathons.