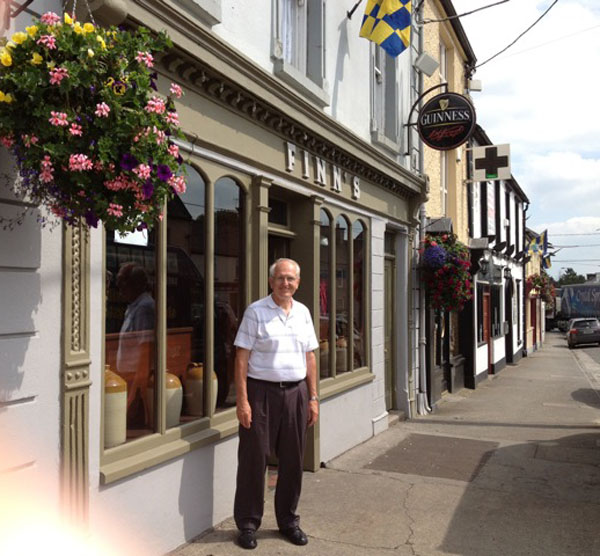 Daniel Ryan, Dublin, Ohio, USA on a recent visit down memory lane to visit the birthplace of his great grandfather Thomas Ryan, Garrangrena 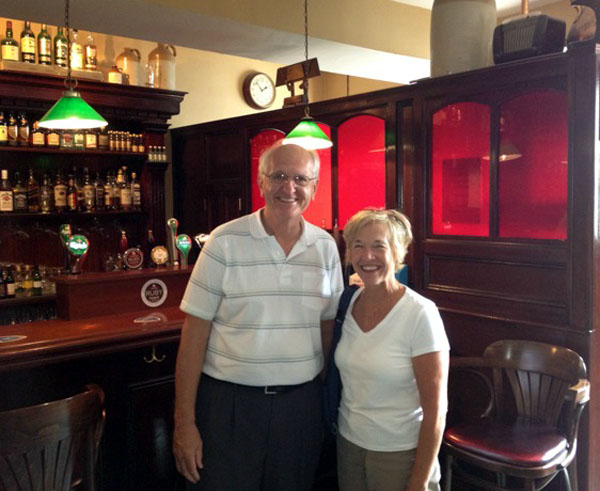 Daniel pictured with his wife Jane
Daniel writes: "On 10 August 2012 I was finally able to visit Borrisoleigh with my wife, Jane. My great grandfather, Thomas Ryan, emigrated from the area in 1865. The baptismal registry my brother, Kevin, had obtained from Sacred Heart Church indicates that he was from Garrengrena. As a result of a discussion with a couple of fellows in Finn’s , we were able to take a drive out to the area. Absolutely breathtaking and very emotional for me."
Hospice Presentation from Mick Cowan Memorial Tournament

Proceeds of the Mick Cowan Memorial Tournament will be presented to North Tipperary Hospice this Friday night, 31st August in Stapleton’s Bar. All are welcome.
St. Cualan’s Club 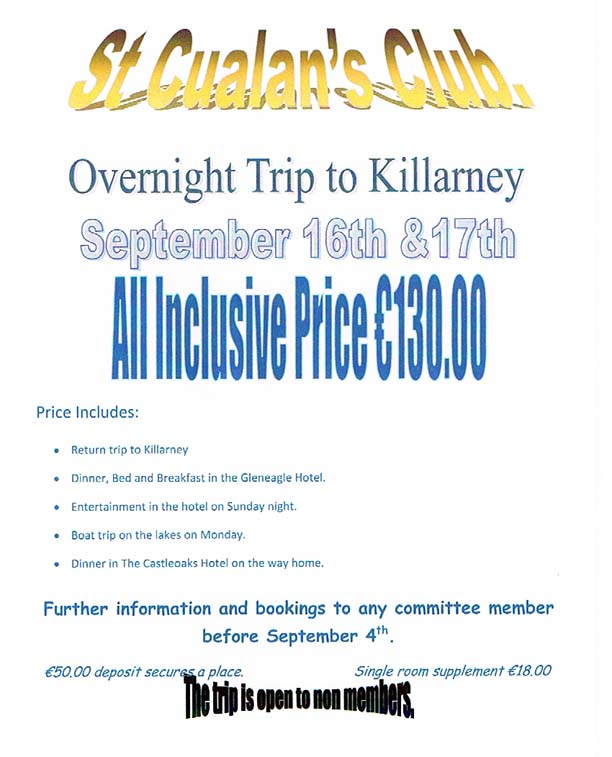 Fit4Life Templemore will hold their 2nd annual 4 Mile Track & Trail Run in the Town Park on Sunday 16th September @ 2.00pm. The run starts at the Athletic Track and continues through the woods in the Town Park, before finishing back at the Track. This is a nice flat course very suitable for all levels of fitness – walkers, joggers, runners, all are welcome.

Entry is €10 which includes refreshments afterwards in the clubhouse, souvenir medal and spot prizes. Athletics Ireland approved course, individual times will be available to participants afterwards. Registration starts at 12.30pm. 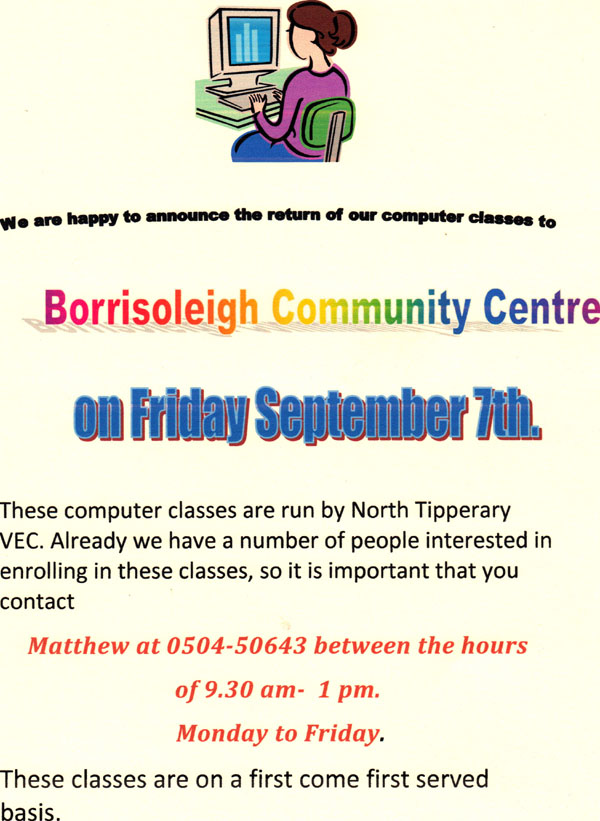 U12 Hurling: Last Saturday our U12’s were in action in Group two of the Premier end games in Littleton. Our first game was a semi final fixture against our neighbours Drom & Inch who had earlier defeated Rosegreen in the quarter final. Our side sprung into action from the start with fine points from James Devaney and Raymond Mc Cormack. Drom fought back well and responded with a goal. Some further points from Fintan Holland, James Devaney, Ray Mc Cormack and a pointed 65 from Kevin Maher meant we took a 7pts to 1-2 lead into the dressing room at half time. The second half was a more tense occasion with Joseph Boyle, Oran Bergin and Kevin Maher in defence playing well and soaking up a lot of pressure. A fine save by John McGrath from a Drom & Inch free helped Borris maintain a slight advantage. The final score was Borris Ileigh 10pts to Drom Inch 1 –04. 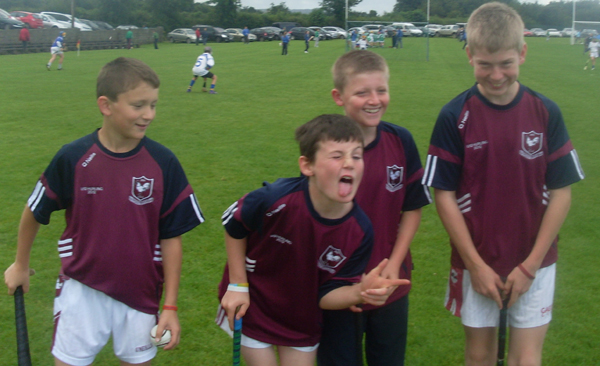 Some happy faces after the match!!! Clerihan emerged from the other side of the draw as our final opponents. With Clerihan having beaten Borris earlier in the year in the football quarter finals this gave us an added incentive going into the final. Once again the Borris boys seized the initiative and an early goal from a long ball by from Ray Mc Cormack put us into the driving seat. Another goal and some further excellent points from James Devaney gave us a 2-04 to 2 point lead at half time. Some great defensive work in the second half from Oran Bergin, Dan Ryan and Seamus Ryan kept Clerihan scores to a minimum. Alvis Danko in midfield worked hard alongside Ray McCormack. In the forward division Dirk Leimhlehner, James Kelly and Michéal Ryan worked tirelessely to provide great assistance to scoregetters in chief Fintan Holland and James Devaney. The final score was Borris Ileigh 3-04 to Clerihan 1-02. The County Chairman Joe Kennedy presented the shield to Captain Ray Mc Cormack. Also a mention for the ever reliable Aaron Rabbitte who made a significant contribution to this team throughout the year who was absent on the day. The achievements of both U12 teams were recognoised later that evening when both U12 panels were treated to a barbeque and a presentation in the Parish Community Centre. Well done to Manager Michael Delaney, Paddy Ryan, Michael Galvin, John Hogan and Damien Dunne who were involved with the U12’s team during the year. Thanks also to the committee members and followers who worked hard on the day, to prepare, cook and serve the well earned refreshments afterwards.

Our second U12 team travel to Dolla on Thursday evening to participate in a tournament hosted by the Silvermines Club. Other teams participating are Silvermines, Newport and Roscrea.

U14: Our U14’s got of to a winning start in the plate competition with a victory over Silvermines in the opening round. The next fixture is away to Shannon Rovers on Wednesday 5th of September.

U16 Our U16A Semi final v Nenagh Eire Og is scheduled to take place in Borrisoleigh tomorrow Thursday 30th of August at 6.45pm. A good turnout would be appreciated to support this team who have worked very hard to get to this stage of the competition.

Best wishes also to Kieran Maher and Eoin Stapleton who will be representing the club at Inter County level in the Tipperary Supporters Club U16 and U15 competitions this coming week end.

Senior Hurling: In the next round of the Co.Championship we have been drawn against Eire Og Anacarthy. This match is down for Saturday 15th September with Cashel the likely venue.

Minor Hurling: We have one more match to play in this competition and a win might put us back in contention depending on other results. Borrisokane are our opponents.

Junior C Hurling: We are down to play Shannon Rovers in Kilcolman on Sunday 2nd of September at 12 o clock.

Congratulations to Martin Treacy and Joanne Cowan on their recent wedding. Martin is a member of the Senior Panel and Joanne is with the Camogie team so we wish them well in their future life.

Club merchandise is available in the pavilion every Saturday between 11am to 1pm. or contact 087 9439531.

The club extends its sympathies to the family and relatives of David Carter who passed away recently. Ar dheis de go raibh a anam dilis. 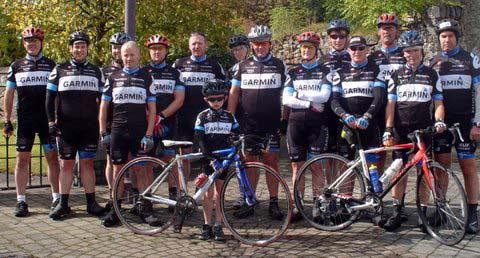 Cycle date has been changed

Please note that this years cycle will now take place on Sunday 16th Spetember with the 50 mile cycle leaving at 1pm and the 25 mile cycle leaving at 2pm both from the Square in Borrisoleigh. This year’s cycle is in support of the provision of special class facilities for children with Autistic Spectrum Disorder in Killenaive National School, Killeen, Nenagh. Sponsorship cards are still available from P.J. Delaney and Ruairi O’Connell.

The third round of the championship has been moved forward to 11 am on Sunday 2nd September on account of the Tipperary Junior team having a match later in day. It will be at home against Kildangan.
Junior training Thursday evening at 7 pm. Under 14 and 16’s will have training Saturday morning at 12. Under 12 training parents/guardians will be texted. Under 10 training at 6.30 pm in the park on Tuesday evening. The under 6 and 8 training continues on Tuesday evening at 6.30 pm to 7.30 pm, in the Park. Could all girls bring their helmets, hurleys and shin guards.
Our under 8’s have a blitz in the camogie field in the Ragg on Saturday to last from 10 to 1. Best of luck girls.
Next week will see Borrisoleigh Camogie Club hosting the Tomas Max Memorial Tournament, commencing at 6 pm sharp on Friday the 7th September. Borrisoleigh will be defending the shield that they won last year so all support on the evening will be appreciated.
Camogie club merchandise now available Hoodies, tracksuits, t-shirts, jerseys and raincoats available. See Advertising Section of www.borrisoleigh.ie for pictures. If interested please contact Caroline at 086 1522716.

At the London Olympics 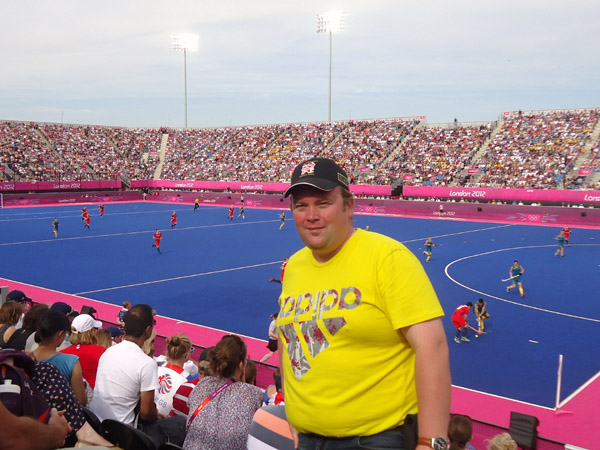 Sean Prior, Knockanevin at the recent London Olympic games taking in a hockey game between Great Britain V Australia (not exactly the same as Tipp v KIllkenny) 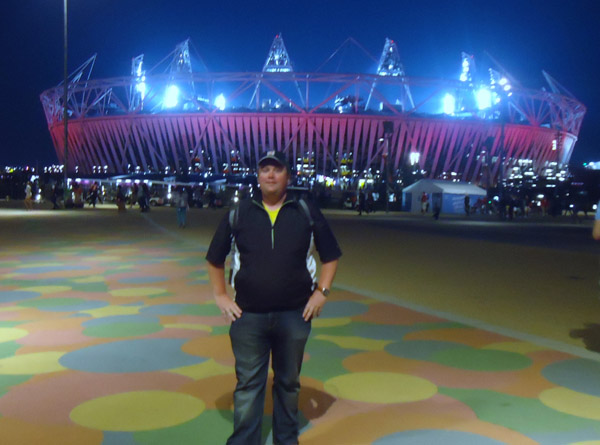 Sean pictured outside the Olympic Stadium
Borrisoleigh and Community Development Association
The association extends its deepest sympathies to the family and relatives of Dave Carter who passed away recently. Dave was involved in the running of the association for years and was the current Secretary of the Association. Ar dheis de go raibh a anam dilis.
Marian Hall Lotto 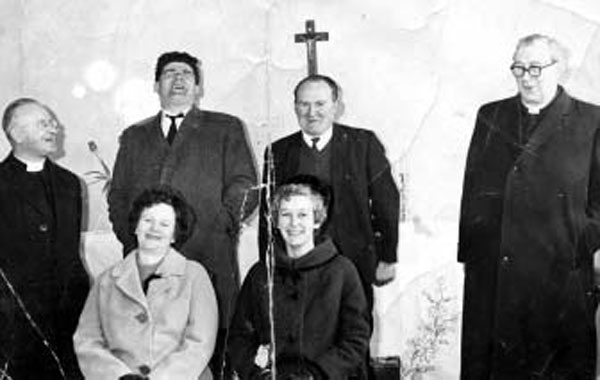