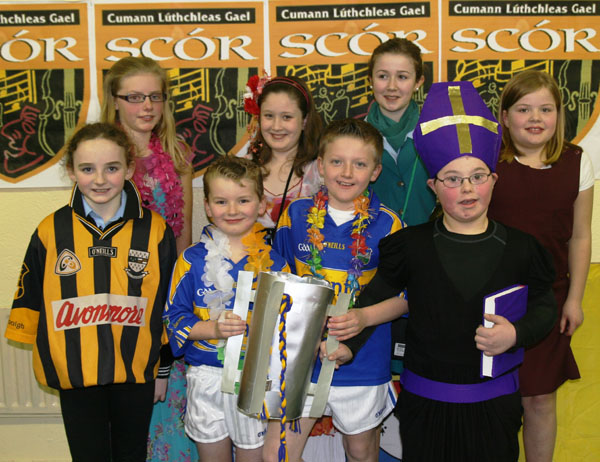 Archbishop Boyle presents the Liam McCarthy Cup to some very happy Tipp wannabees!
The Borrisoleigh parish final of Scór na bPáistí took place last Sunday,20th February in the Marian Hall. There were contestants in all eight competitions namely Figure Dance, Solo song, Instrumental Music, Recitation, Ballad group, Novelty act and Set Dance. Great credit is due to all the children who participated and entertained a full hall for the afternoon. Many thanks to the mentors / coaches who prepared the children for the different competitions.Congratulations to all the winners who are wished every success in the area final which will be held in Borrisoleigh on March 11th at 7.30 pm.

Paddy Dolan was a special guest singer at the parish final as he became county champion in the solo song competition of Senior Scór on Friday last. The Borrisoleigh set dancers ,who are also county champions, entertained the audience by dancing the Roscommon Lancer. Many thanks to Brendan Maher who presented trophies / medals to the children at the Scór parish final. 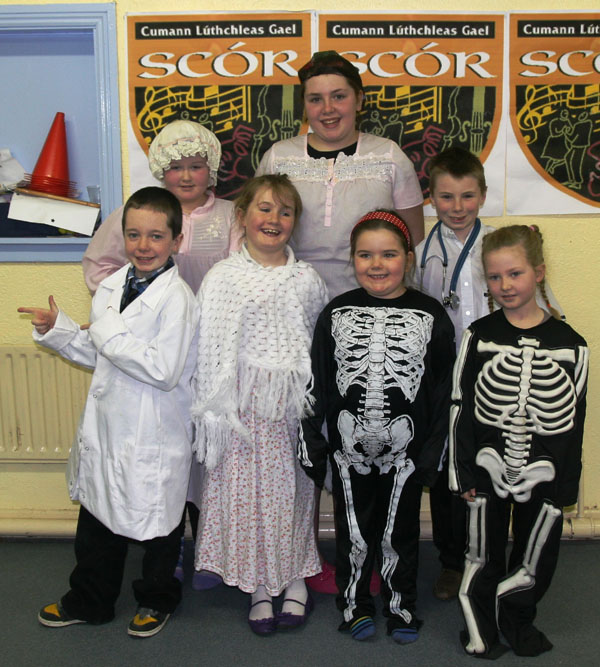 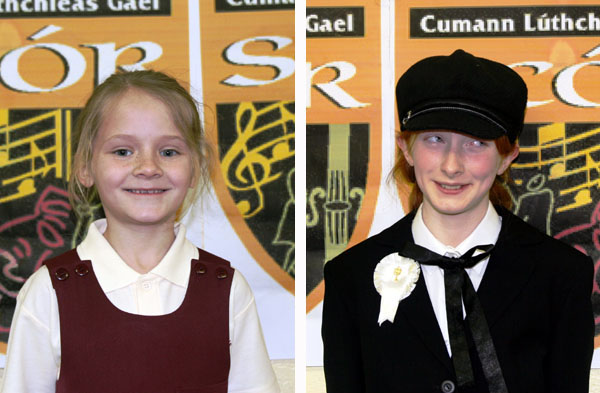 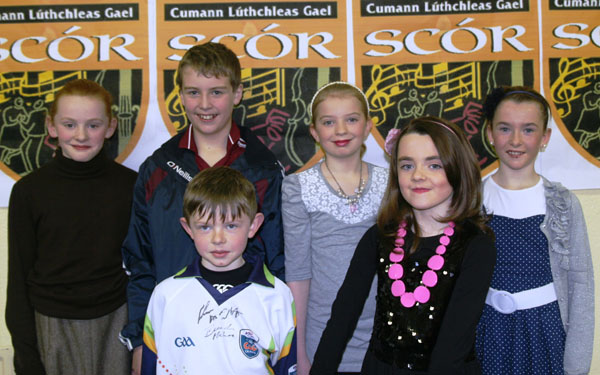 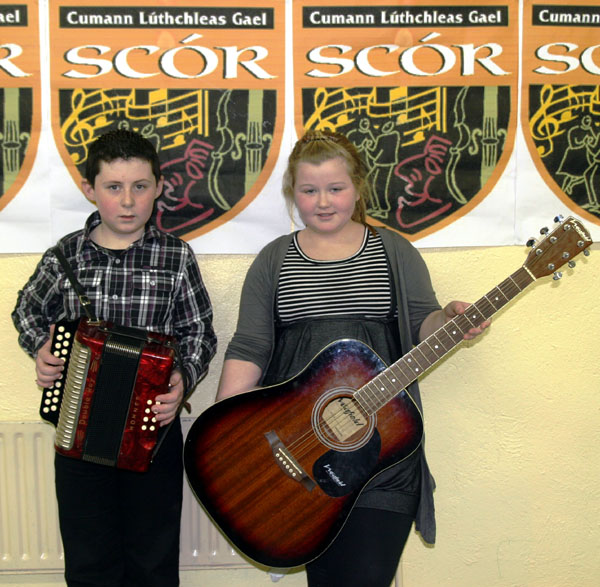 Liam and Leah (would be even better as the Irish Eurovision Song Contest entry!) 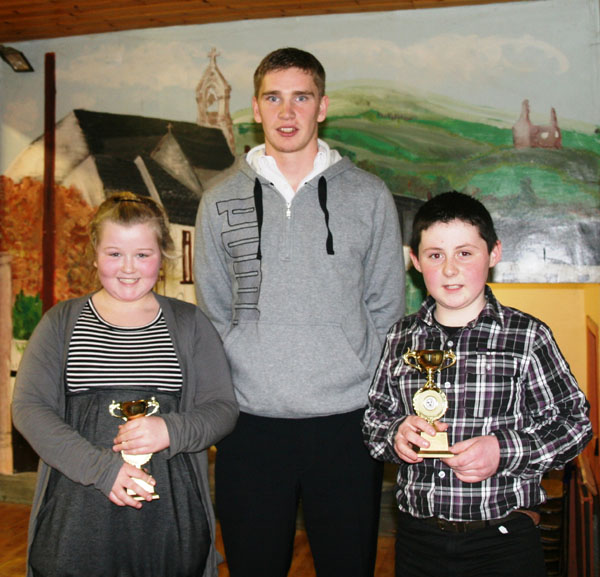 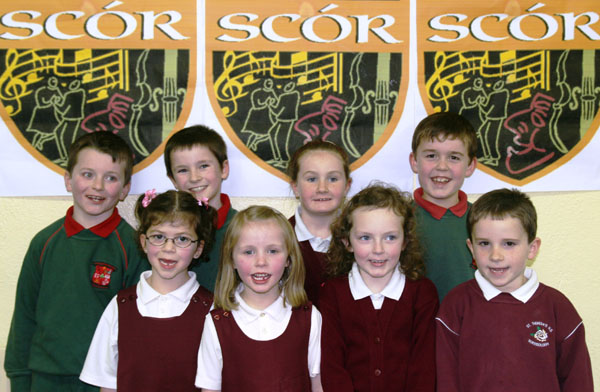 Our young set dancers at the Scór competition 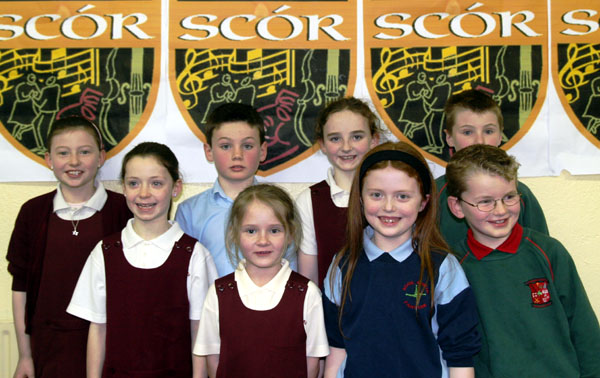 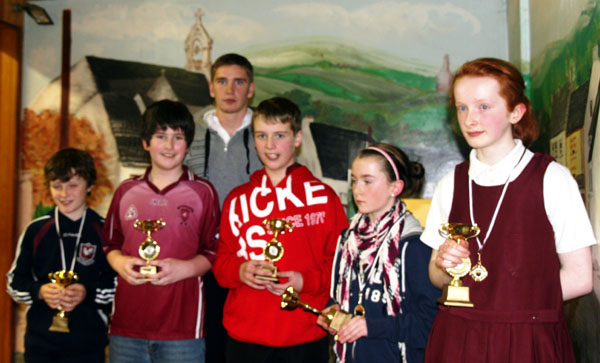 Brendan with more winners from the Scór na bpaistí competition

Brendan presents Orla and Hazel with their prizes
The Bodhrán Maker 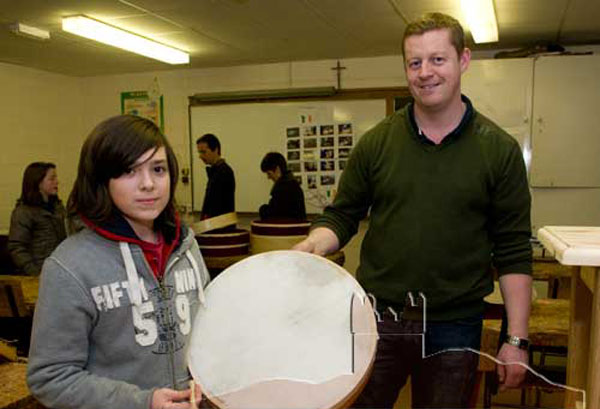 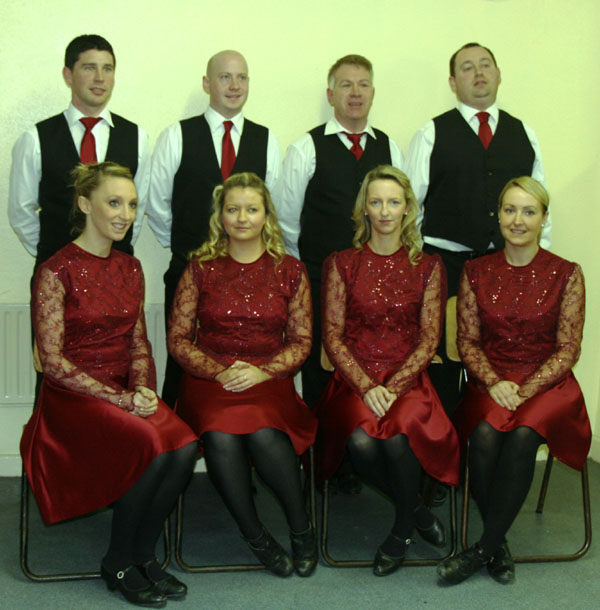 Our Senior Scór Set Dancers who were victorious in the County Final in Clonmore on Friday 18th February Senior Scór – North Final
The North final of Senior Scór was held recently in the Marian Hall ,Borrisoleigh. Competitors from Borrisoleigh in the Solo song, recitation, Novelty Act, Question Time and Set Dance qualified for the County final.
Senior Scór – County Final
The County Final of Senior Scór was held in Clonmore last Friday night 18th. February, Borrisoleigh was victorious in the solo song competition which was won by Paddy Dolan and also in the Set dancing competition. Heartiest congratulations to all concerned. The Munster semi-final will be held in Cappoquin on 5th March at 7.30 pm. Best of luck to Paddy and to the dancers. 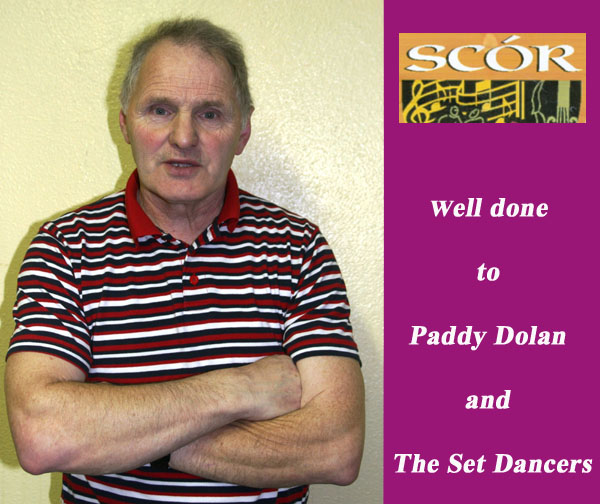 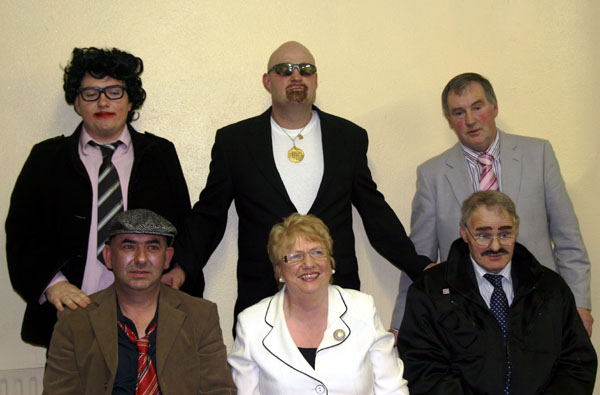 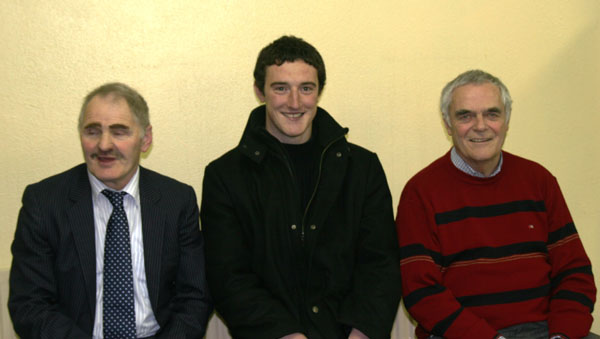 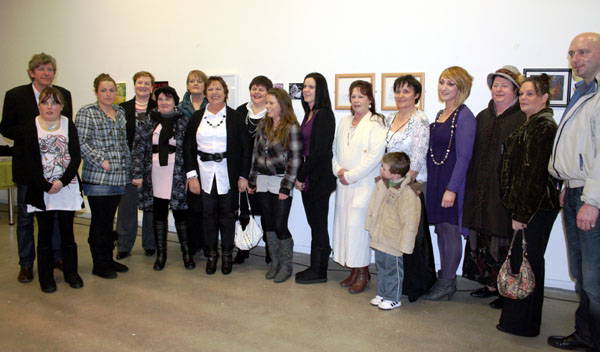 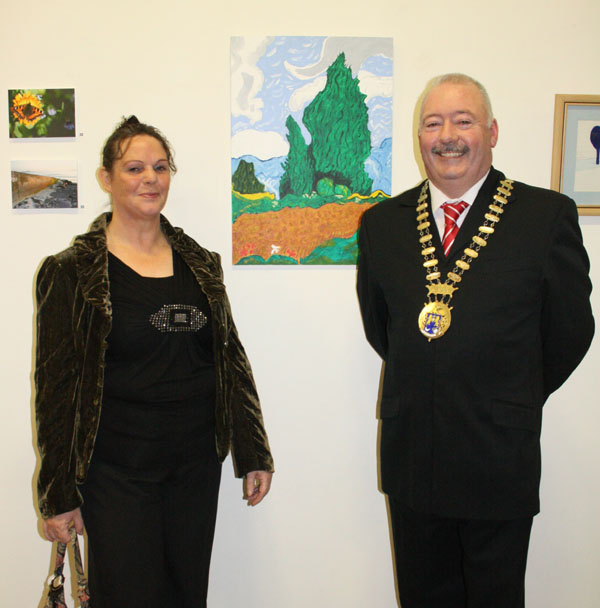 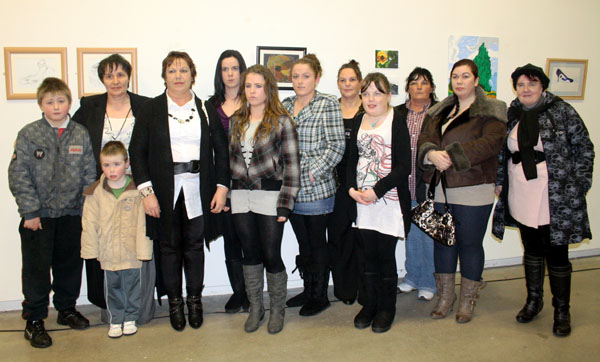 Students from Thurles Education Centre pictured with family members at the opening of their exhibition ‘Le Cheile’ on the 3rd of Feb in The Source Arts Centre
St. Patrick’s B.N.S. Football League 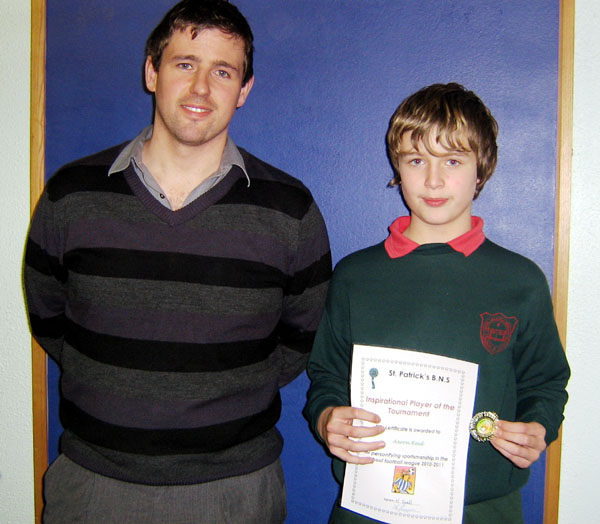 Mr. Small with Aaron who won the "Player of the Tournament" award for his excellent leadership skills
The football league at St. Patrick’s B.N.S. produced many enjoyable and exciting matches since it commenced in December. All boys participated and gave of their best for their teams. Particular credit is due to the older boys who guided and assisted their younger team-mates in developing their skills.

Congratulations to Aaron’s Reid team who were the eventual winners following a tightly contested final with Nicky Cooney’s team. Well done to Aaron who also received the ‘Player of the Tournament’ award for his excellent leadership, motivational and playing skills which helped all his team members to shine.

Sincere thanks to Mr. Small for refereeing throughout. Now that everybody has gained such experience and skill we look forward to an even better tournament next year. 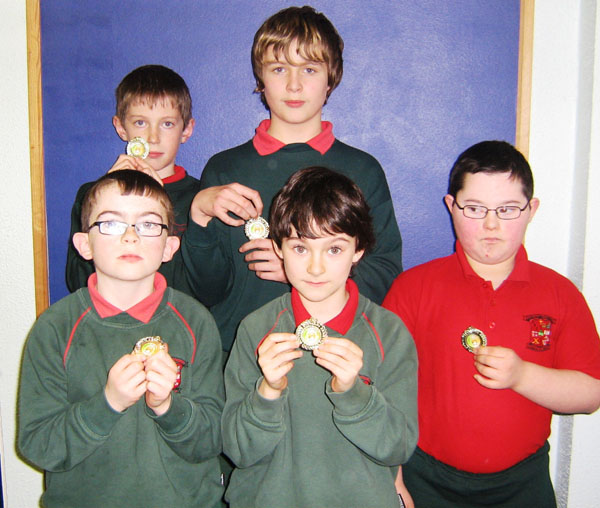 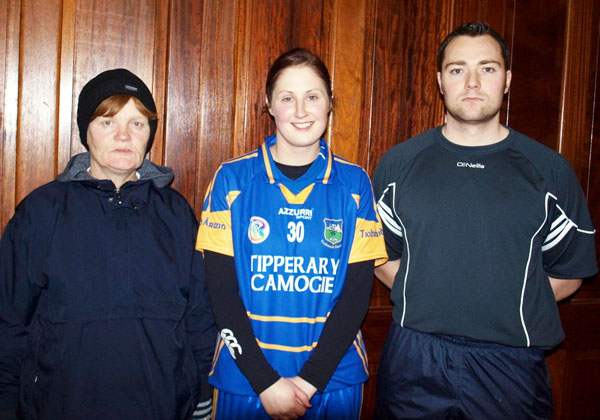 Our annual church-gate collection takes place this weekend 26th and 27th of February. All support will be greatly appreciated.

The Borris-Ileigh U’16 panel will undertake a fundraising effort in co-operation with the Senior hurling panel on the weekend of the 19th & 20th March. This is a sponsored climb of Keeper Hill (the highest mountain in North Tipperary) as well as Galtymore (the highest mountain in County Tipperary in the same weekend. As this would be a very commendable achievement by all concerned, all members of both panels will be looking for sponsorship in the coming weeks in recognition of this effort. It is important to note that all monies collected by the respective panels will stay within those panels, i.e. whatever money the U’16 players raise, stays in the U’16 panel. The U’16s are seeking to raise money to buy a new set of jerseys for the coming year. This is an excellent initiative by the team as they are taking the preparation of their own team into their own hands and is a very worthwhile cause. Your generosity will be greatly appreciated in the coming weeks

Membership for 2011 is now due, €10 per child or €20 per family. Membership forms will be given out at training and should be returned as soon as possible so that the contact lists for texting can be updated.

Borris-Ileigh GAA News
U21 Football
This was our first match of the season and we had a hard earned draw against Burgess. All players gave their all and were unlucky not to win in the end. This will probably go to a replay and hopefully we will be victorious next time.
Hogan Cup Senior Hurling
We were drawn against Roscrea and this match is in Roscrea next week-end, day and time to be fixed. We will notify all during the week.
County Senior Hurling League
The County Senior Hurling League is due to commence around the 13th. March. The North Senior Hurling C/Ship is to start on the 10th. April. The U21 Hurling C/Ship is due to start mid March. We play Templederry in the 1st. round.
Senior Scór
Well done to all participants who performed extremely well in Co. Final in Clonmore last Friday night. Congratulations to our winners Paddy Dolan in the Solo singing and our Set Dancers, Julie Treacy, Pauline O Brien, Aileen Og Groome, Michelle Maher, Declan Maher, Peter Ryan, Henry Groome, Tomas Walsh. They now go forward to the Munster Semi-final in Cappoquin on Sat. 5th. March. We wish them all the best of luck.
The club would like to congratulate John Keane one of our stalwart hurlers in the last twelve years even though beaten by Clarinbridge John gave a good accout of himself scoring two points playing for De La Salle last Saturday.Well done John.

The club extends its sympathies to the families and relatives of those who passed away recently. Ar dheis Dé go raibh a nanamacha dilis. 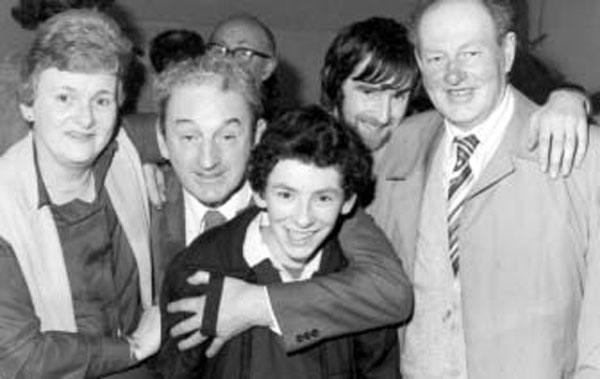