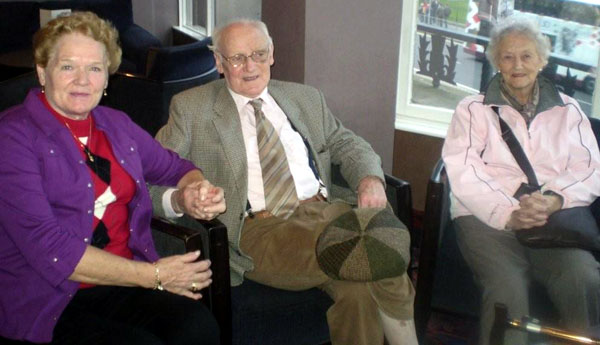 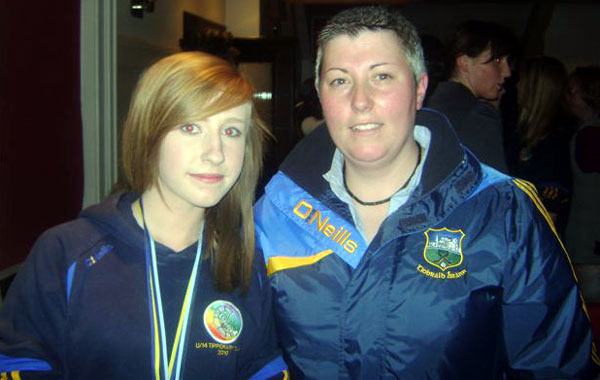 Aisling with one of her mentors Siobhan Stapleton on the occasion of the under 14 Tipperary camogie team receiving their medals for competions held during the year.  Well done Aisling and all who were involved.
Dr. Kevin Delargy’s New Surgery 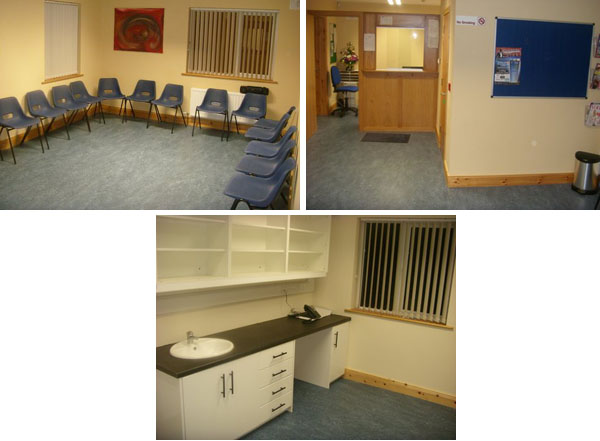 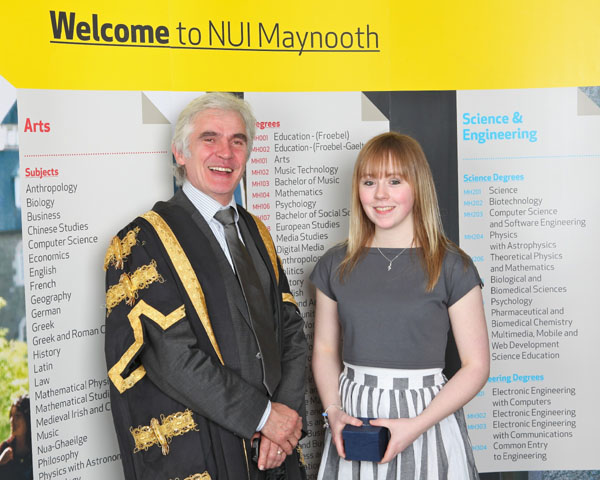 Annette Slattery, Killinan, Thurles receiving her Entrance Scholarship from Maynooth President, Mr Tom Collins – a native of the Silvermines. Annette received this award on the basis of her Leaving Certificate results. She is a granddaughter of Michael Collins, Upr. Main St. Well done Annette.
Recent trip to London 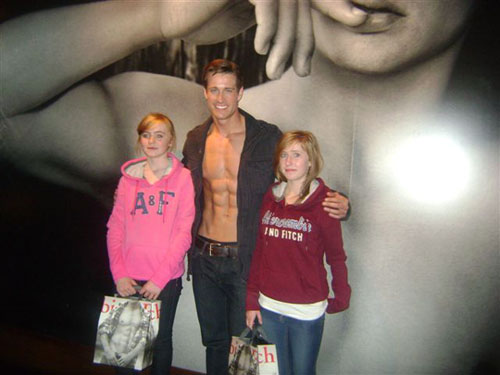 Photo of Aisling and Rebecca taken during a recent trip to London with Model at the Abercrombie & Fitch shop.

Fair of Borris Social in The Community Centre 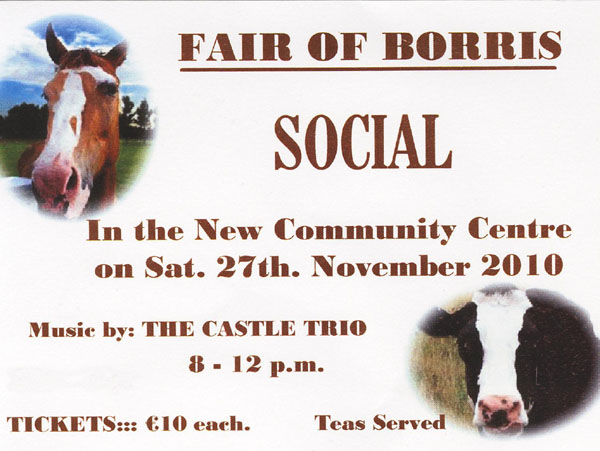 
Annual Mass for the Dead

Our annual Mass for those who died from our parish during the past year took place in the parish church on Friday 12 November. Family members brought lighted candles to the altar in memory of their loved ones. The names of those especially remembered are as follows: 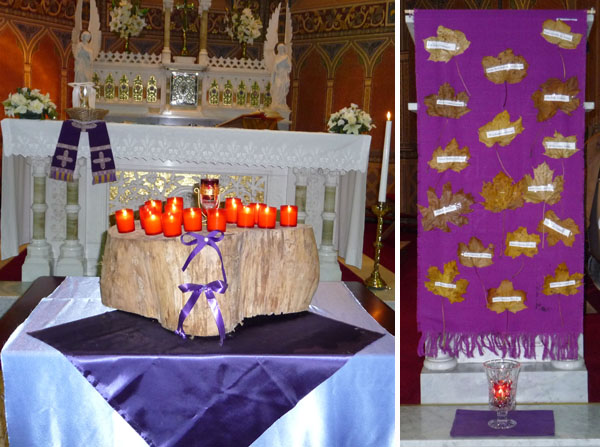 The candles representing those who were especially remembered in our annual Mass for the Dead. Each name was also placed on a leaf in front of the Ambo where they will remain for the month of November, the month of the Holy Souls. 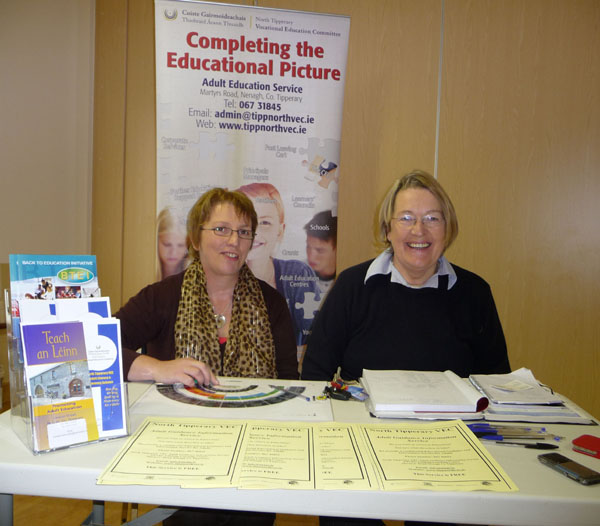 Registration took place for the beginners course in computer skills. There was a very positive uptake for this course, so much so that an extra class per week had to be put in place to cope with the numbers.
North Tipp VEC hope to broaden the availability of their courses to the Community Centre in Borrisoleigh. Further information can be had by contacting Nora Gubbins at 067 – 46022.
North Tipperary VEC Adult Guidance Information Service 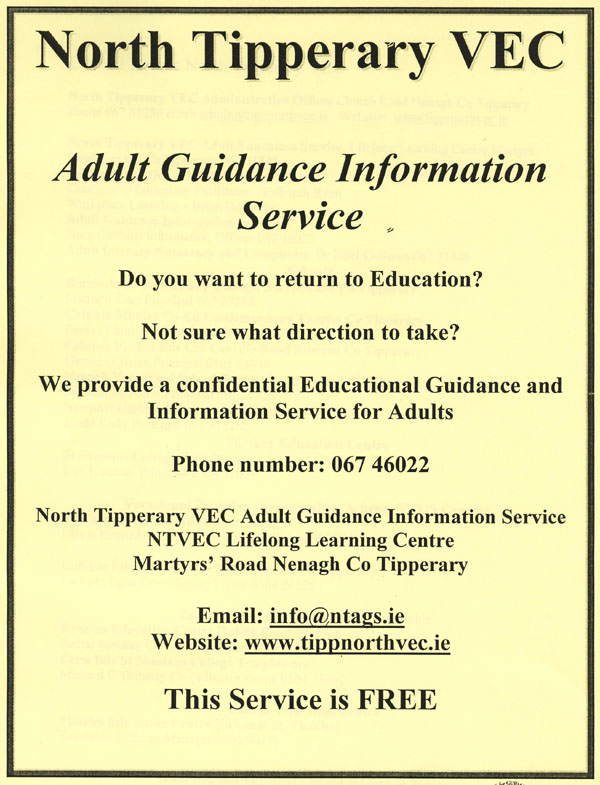 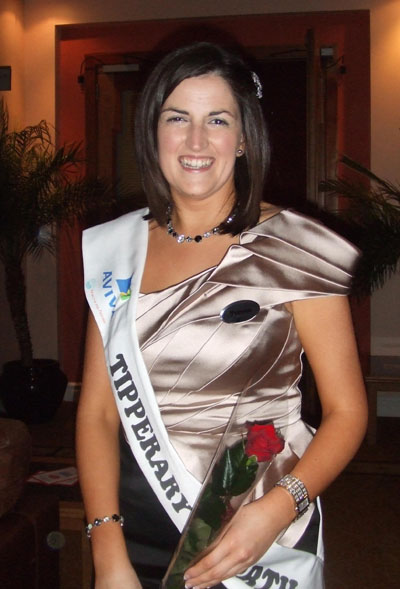 Last weekend all roads led to Tullamore where Teresa Kennedy was the North Tipperary Queen.  Although she didn’t win, she represented her club and region excellently.As always there was a big Clodagh contingent there to support Teresa over the weekend, and everyone certainly enjoyed themselves. 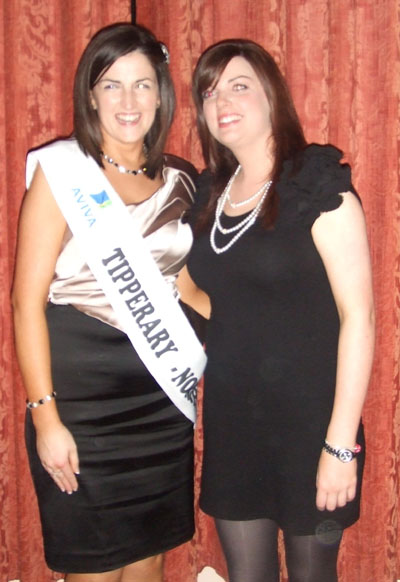 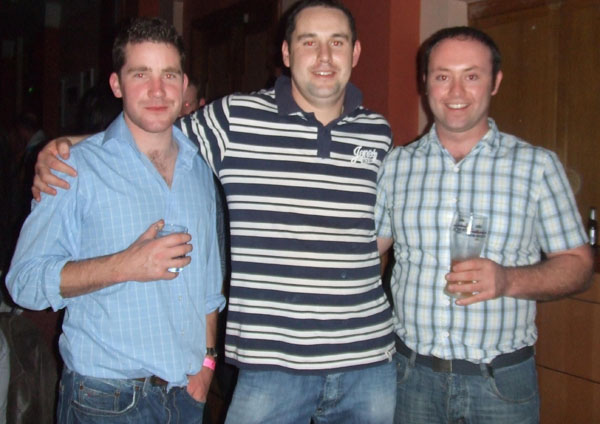 Some supporters on the night for Teresa 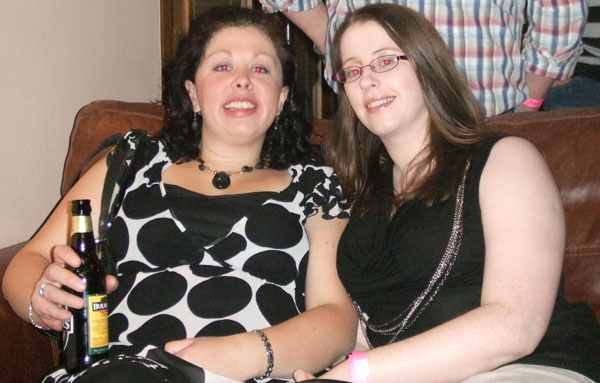 Liz and Gemma enjoying the night 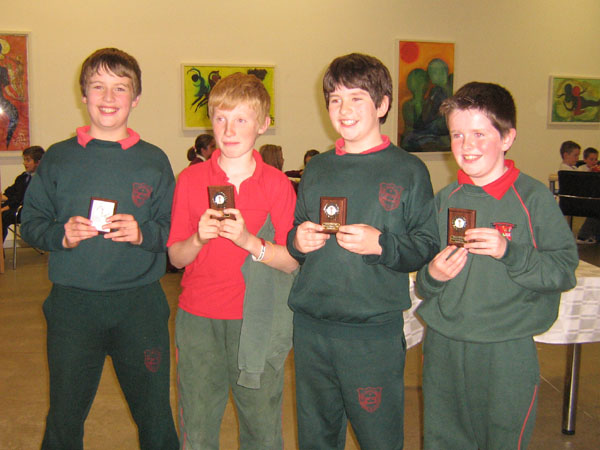 A table quiz for teams from 4th-6th classes from primary schools was held in Thurles Library last week in conjunction with National Science Week. St. Patrick’s BNS was represented by Aaron, John, Aaron and Oisin  for the event. In keeping with the theme of the week at least half of the questions were science-based with the remainder testing the pupils’ general knowledge. Following a keen contest the boys from St. Patrick’s were delighted to emerge in second place, a mere two points behind the eventual winners. Well done boys! 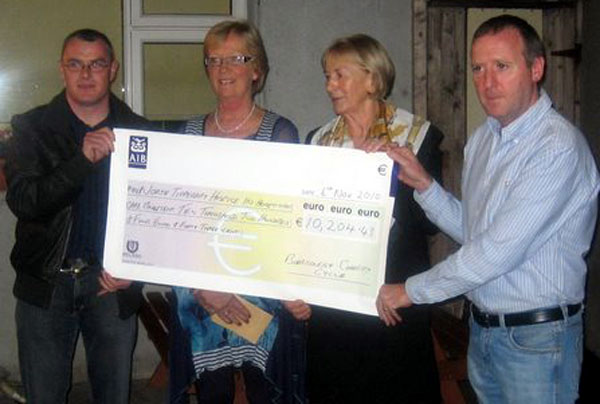 On Saturday 6th November in Stapleton’s Bar P.J. Delaney and Ruairi O’Connell, on behalf of the Borrisoleigh Charity Cycle, presented €10,224.43 to North Tipperary Hospice In Home Care movement. This was the proceeds of the sponsorship raised from this years event. Representatives of North Tipp Hospice, Lelia Kelly, Maria McGrath and Katherine Harty were present to accept the cheque . Before making the presentation Ruairi outlined the history of the cycle which is now in its seventh year.

To date over €70,000 has been raised by the people of Borrisoleigh for various deserving causes and the event has gone from strength to strength with this years event being extented to include a 50 mile route. Maria McGrath who is secretary of North Tipperary Hospice said she was delighted that the Hospice had been selected as this years charity and accepting the large sum of money raised assured all that it would be put to very good use. Maria outlined the many services that the Hospice movement provides to all those families that are affected by illness and it was clear to the large crowd present that this years chosen beneficiary was indeed a deserving cause. She also thanked everyone who was involved in anyway through organising or participating in the Cycle. The presentation was followed by music and refreshments and a very enjoyable night was had by all. The organisers would like to thank Brid Cowan and family and staff of Stapleton’s Bar for their hospitality on the night. The organisers would once again like to thank everybody who contributed in any way to this years event ensuring that it was a tremendous success once again. 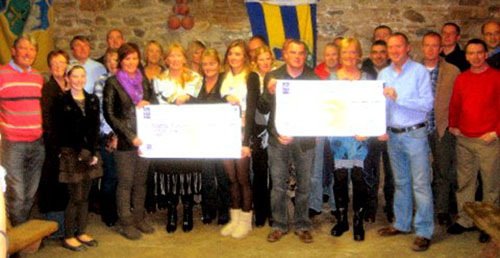 Borrisoleigh Charity Cycle group present the cheque to Maria McGrath Secretary North Tipp Hospice. Also in photo is Jayne Kelly who presented a cheque for €1,000 to Lelia Kelly and Katherine Harty of North Tipp Hospice from sponsorship raised when she walked the Camino de Santiago in Southern France/Northern Spain 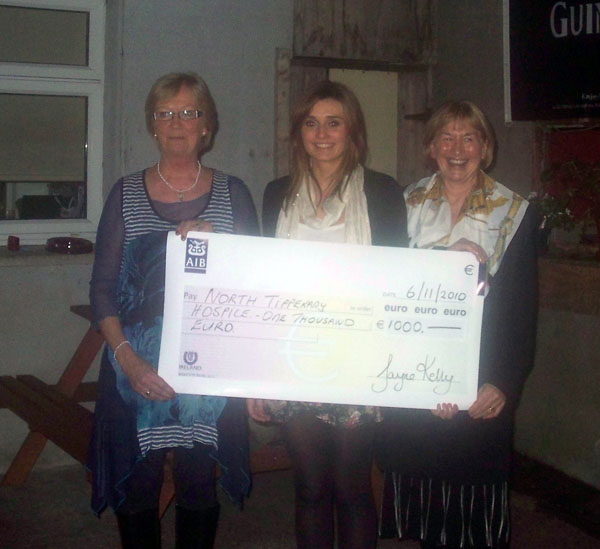 Jayne Kelly presenting her cheque for €1,000 to Maria McGrath and Katherine Harty of North Tipp Hospice from sponsorship raised when she walked the Camino de Santiago in Southern France/Northern Spain

Borris-Ileigh Juvenile GAA Club  U14 Hurling North and County Champions 2010 medal presentation will take place this Friday 19th November at 8pm in the Marian Hall. All are welcome to attend.
Borrisoleigh Community Complex

BORRISOLEIGH COMMUNITY COMPLEX is holding a fundraising event called WHO WANTS TO BE A THOUSANDAIRE in The Ragg Lounge on Saturday 20th November. Many thanks to our 8 Major Sponsors, namely: Tipperary Natural Mineral Water, Shanahan`s Centra Shop, Dr Kevin Delargy, Tipperary Co-op, Kelly`s of Fantane, The Ragg Lounge, Borrisoleigh Pharmacy and The Stakelum Family and also to all who have shown their support by purchasing advertisement slots on the night. A great night’s entertainment is anticipated and you can view a sample video of how it works by logging onto www.thousandaire.ie and hit the u-tube link. Tickets are on sale at €15 each and can be bought from any of the following committee members: Frank Cooney, Brendan Kenny, Bobby Ryan, Don Ryan, John Cummins, Michael Small, Jamie Groome, Diarmuid Kinane, Aileen Groome, John Keane, Patrick Tynan, Caroline Kenny, Martin Hayes, Pat Kearney, Toby Kavanagh, Derry O Donnell, Gerry Treacy, Philip Rabbitte, Martin Ryan, Tomas Ryan, Aidan Cowan. Your support on the night would be greatly appreciated. 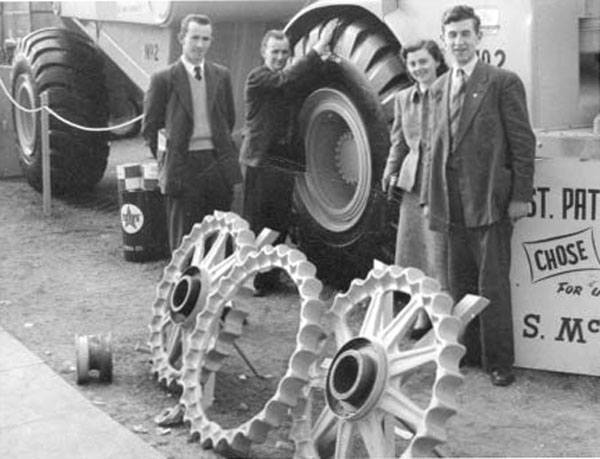