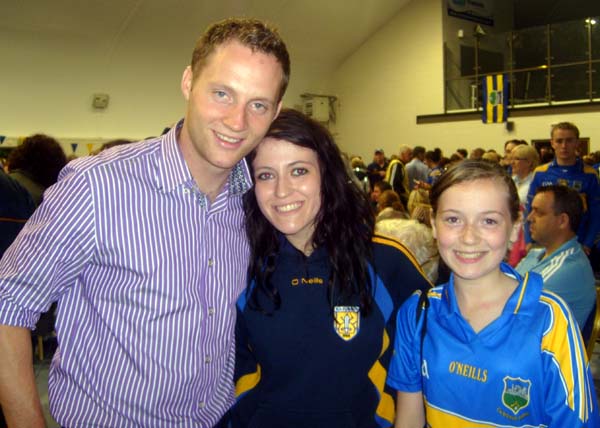 Cliona and Sorcha travelled to Semple Stadium on Monday last to congratulate their cousin Paddy Stapleton and the Tipperary team. The girls are grand-daughters of Nora Kennedy of Cronavone.

Borrisoleigh Website Committee would like to congratulate Paddy, Brendan and all the lads on their All Ireland win. Well done lads!! 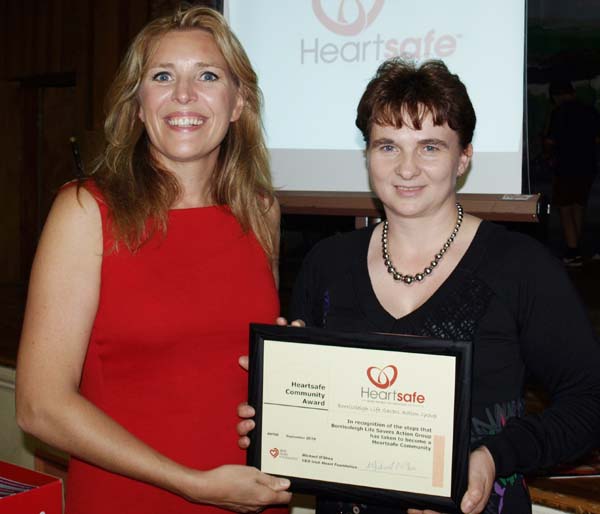 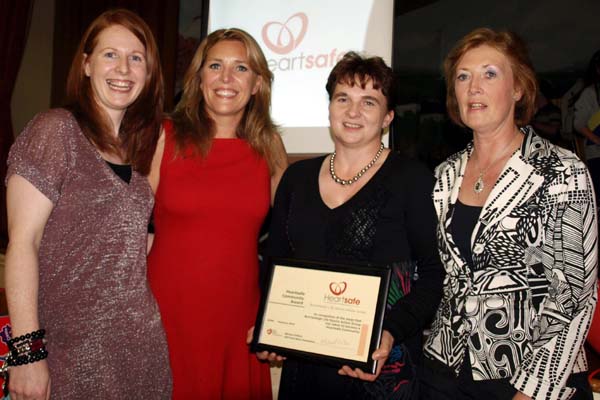 Joanne and Teresa enjoying a cuppa while Christine, Kathleen and Brendan are delighted with the award On Friday night last, 10th September, a large crowd attended the presentation of a Community Heartsafe Award to Borrisoleigh Life Savers Action Group. The presentation was made by Anne Riordan on behalf the Irish Heart Foundation. Noirín Duggan, from Borrisokane, spoke of her personal experience of cardiac arrest at the age of 18! Mary O’Brien, North Tipperary Resuscitation Officer, spoke highly of the achievements of the group. The group and the people of Borrisoleigh received this award in recognition of having made defibrillators and trained personnel accessible to the people of the area. Afterwards refreshments and a chat were enjoyed by all. There are five defibrillators at various locations throughout the community and to date there are thirty volunteers trained in CPR and Defibrillation. Many thanks to those who turned out in support on the night. 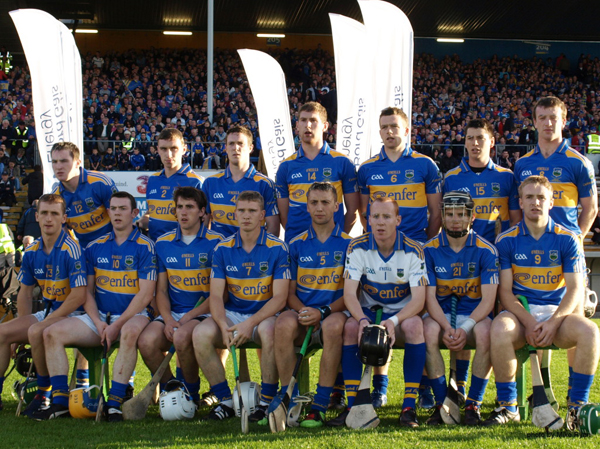 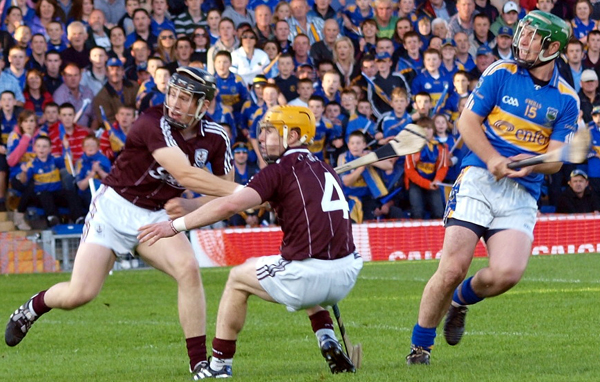 Some action on the night!! 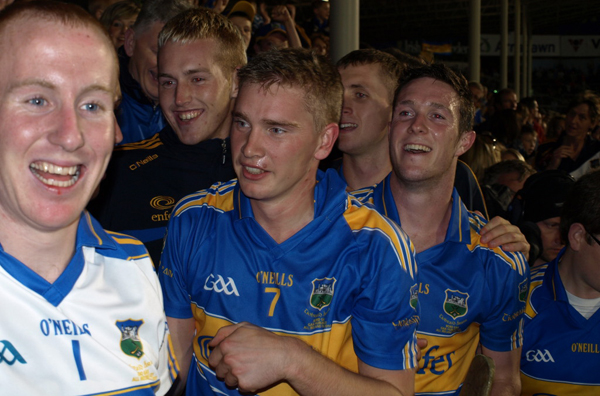 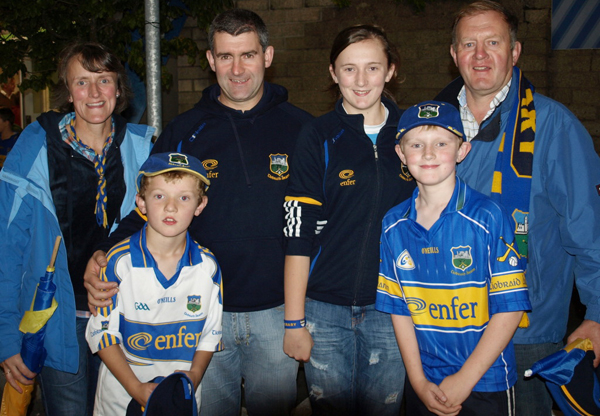 Some spectators on the night. 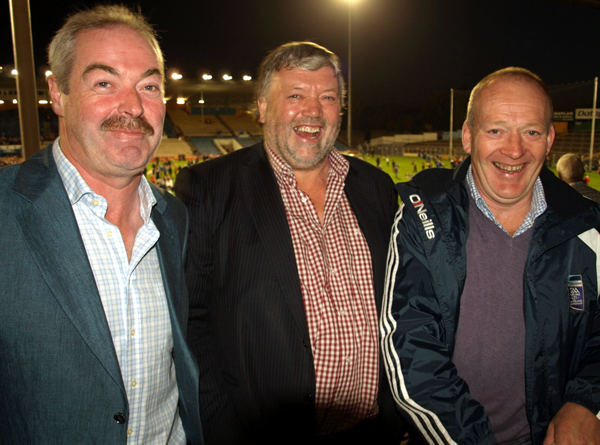 Donie O’Connell, Noel Coonan T.D. and Bobby Ryan thrilled with the U21 win

How proud the Boys’ School are of our two local heroes, Paddy and Brendan who played such influential parts in the wonderful Tipperary win on Sunday! What an achievement for both to have also been selected on the Sunday Game Team of the Year! Over the years both lads have been very generous in sharing their time and expertise with our boys, bringing great excitement to the school on every occasion. We hope that the achievements of September 4th are only the beginning of many more successes and rewards to come. Sincere congratulations and best wishes to all involved.
As we prepared for All-Ireland Sunday the boys put up a great display of blue and gold to honour their heroes. The week of the All Ireland has officially been declared ‘Blue and Gold Week’ in the school as we enjoy the wonderful winning feeling and anticipate a second All-Ireland Title for Brendan next weekend!

(It should be noted that the above article and pictures were submitted last week but unfortunately due to a techinical difficulty with the website they did not appear.) 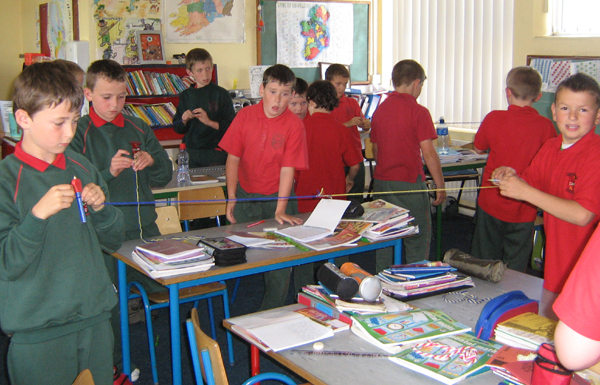 Co-operation required while making headbands for the match 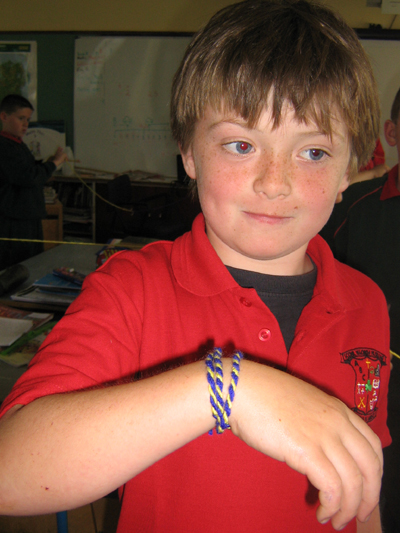 The wristband came out well!!
Prizewinners at St. Patrick’s BNS 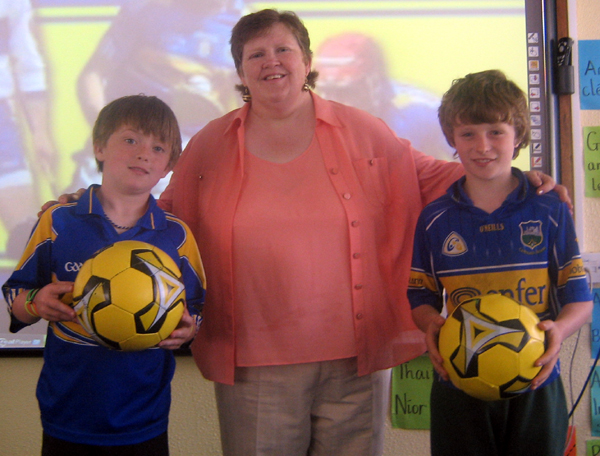 All at St. Patrick’s BNS were delighted to welcome Mrs. Delaney when she visited last week. For two Fourth Class boys her visit was particularly special as she arrived with prizes for her World Cup Competition which she had announced in June. Congratulations to James and Killian who correctly chose Spain as the eventual World Cup victors. 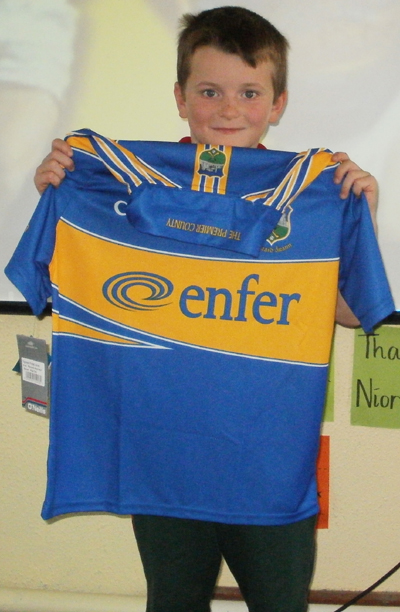 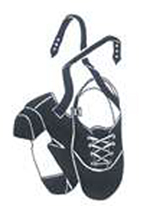 Come along and enjoy the fun!!

The Management Committee of the Borrisoleigh Community Centre are delighted to announce that the centre is open for bookings from Monday 27th September. Facilities available include meeting rooms, kitchen and a large function room. To book the facilities, Tel: (086)2368954 or email: borrisoleighcommunitycentre@gmail.com

Young Chef of the County

Kinane Fitted Kitchens, Toomevara recently launched ”Young Chef of the County” competition, which will be hosted in their showrooms. This is an opportunity for Home Economic students to gain practical experience and broaden their skills. Application forms and further information are available from the office by phoning (067)26087.
Borris-Ileigh Juvenile GAA Club  Under 14

Well done to our U14s who overcame Sean Treacys from the West  Division in the County semi final last Sunday in Clonoulty.  They now face Gortnahoe/Glengoole from the Mid in the County Final next weekend. This game is fixed for the Ragg next Saturday 18th September at 12.45 pm. Your continued support for our young players in their efforts to bring the county title back to the parish is welcomed and appreciated.

The U16 Hurling are still waiting to play their quarter final play-off game against Portroe, date time and venue have not yet been fixed but it may be played next Monday 20th September, confirmation will be given at training.

Congratulations and well done to Brendan Maher and the Tipperary panel on their great win in the U21 final V Galway last weekend. 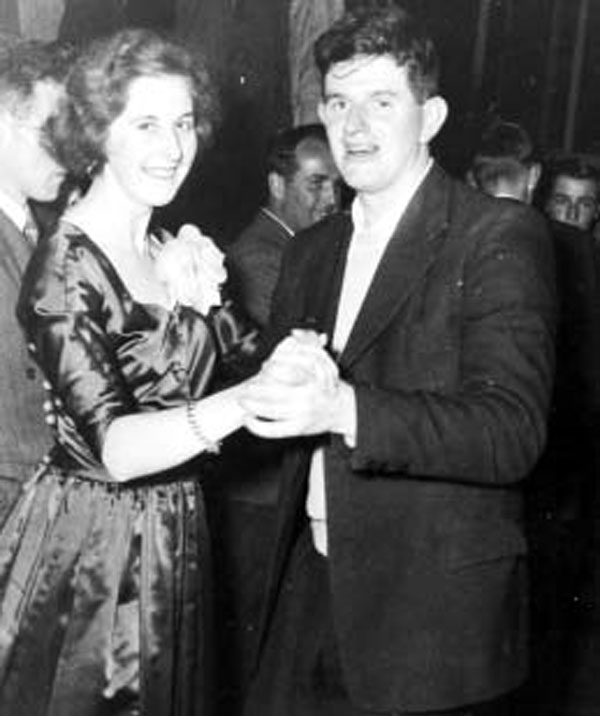 
While we make every effort possible to ensure that the information contained in this Website is accurate and complete, we cannot accept any legal liability as a result of the inaccuracy or incompleteness of the information presented to users of this site.