Monday last August 30th heralded the re-opening of the primary schools in our parish. Pictured here are the new recruits for 2010. We wish them the very best as they begin their education career! 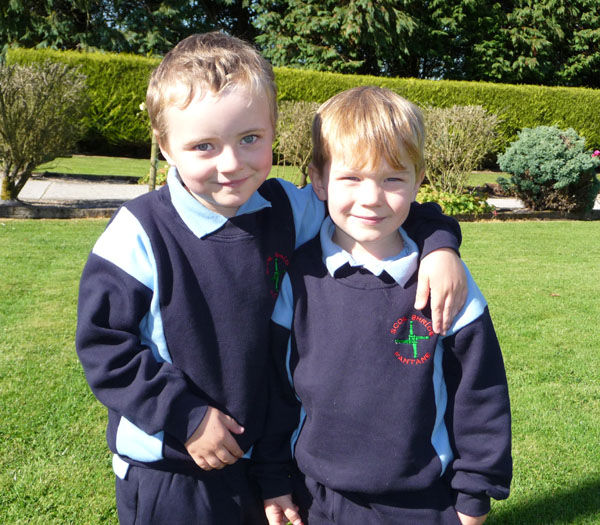 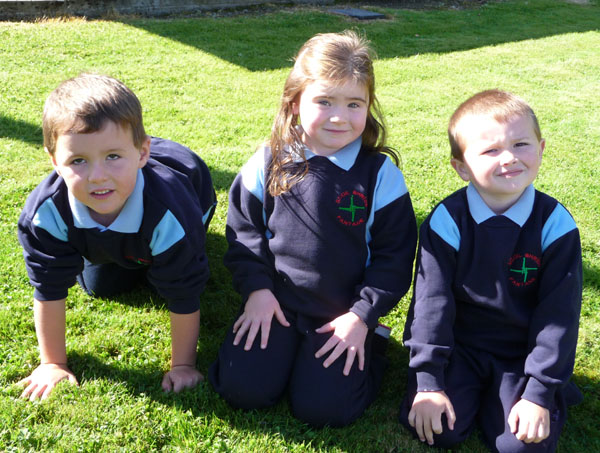 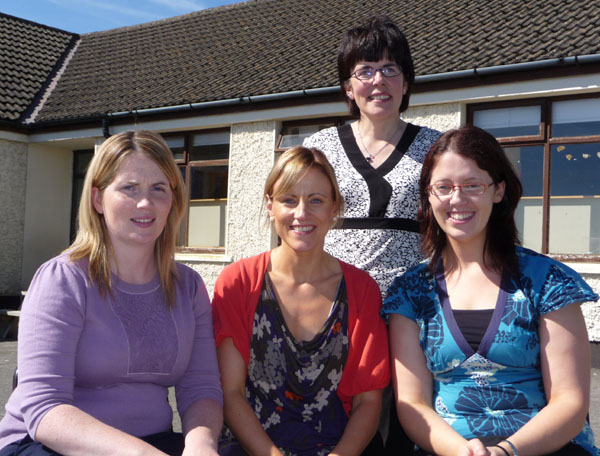 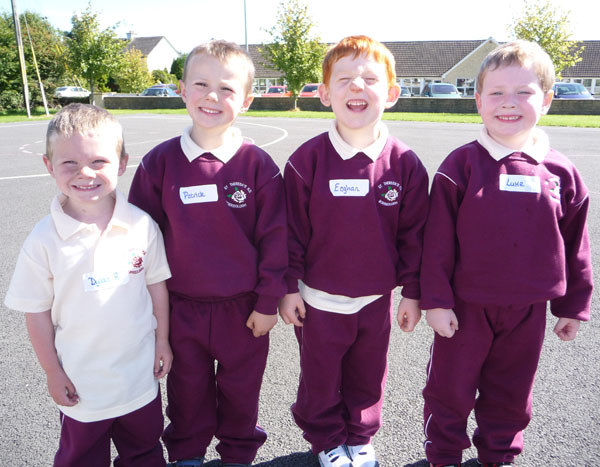 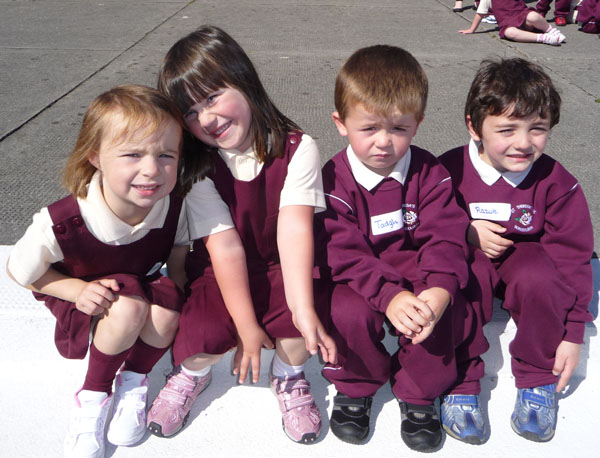 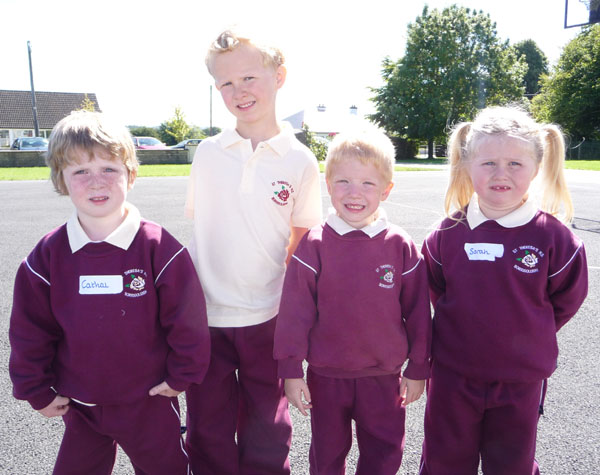 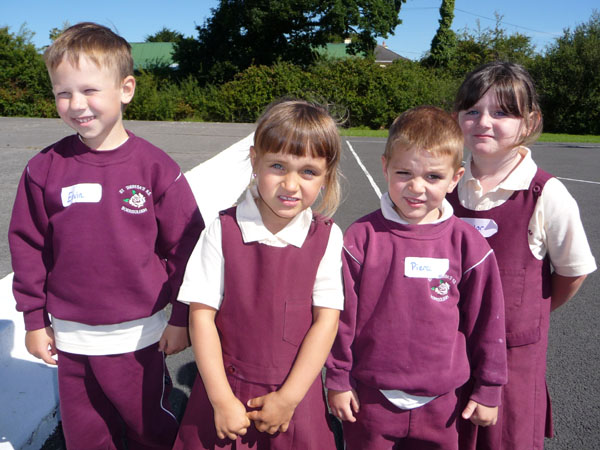 These are the five boys who started in St. Patrick’s Boys N.S. on Monday last. 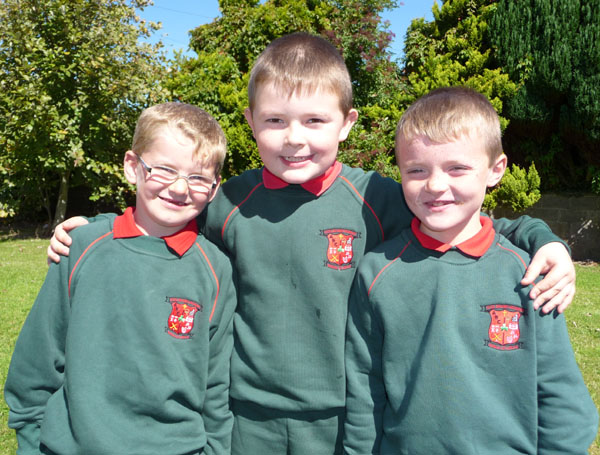 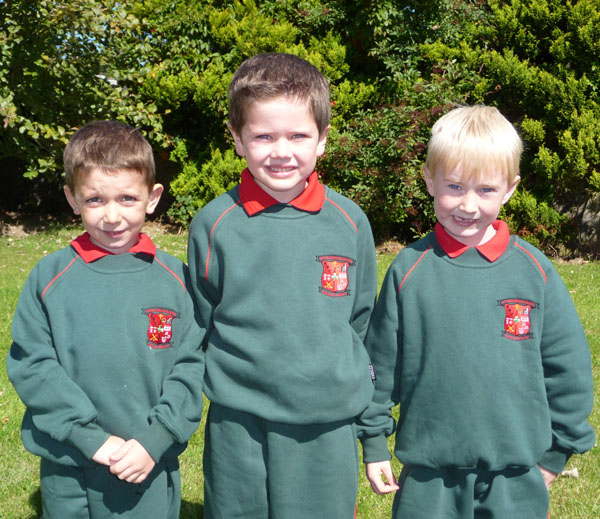 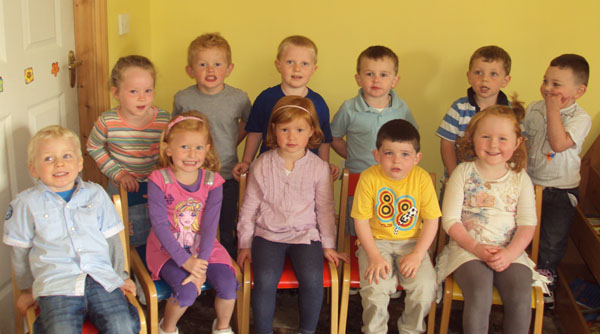 Pictured here are the new boys and girls who started preschool in Fifi’s Tots preschool on monday 30th August. 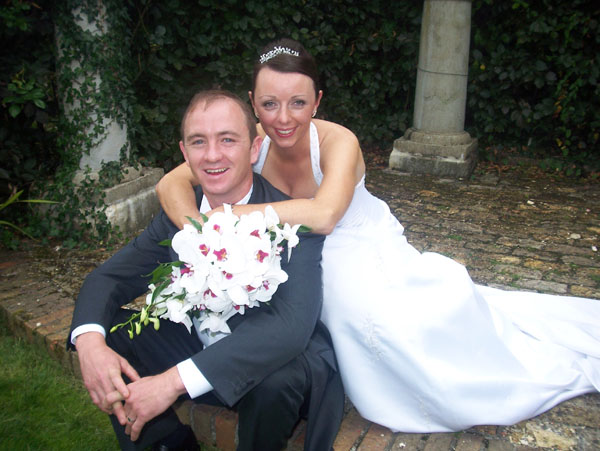 Congratulations and best wishes to Marie Cowan, Main Street, and Mickey Conneely, An Spidéal, Co. Galway, who were married on Friday 27th August in The Sacred Heart Church, Borrisoleigh and celebrated their reception in The Abbey Court Hotel, Nenagh. 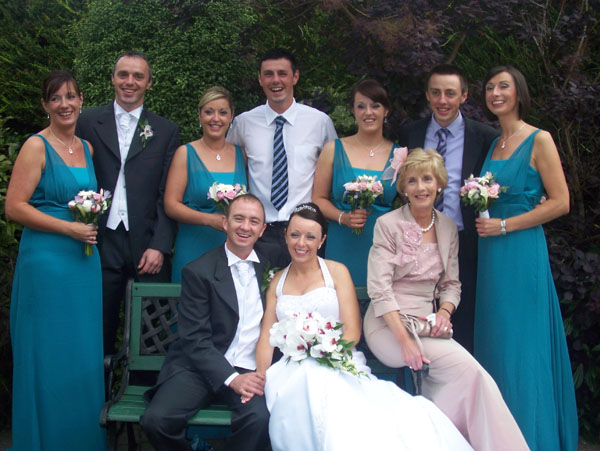 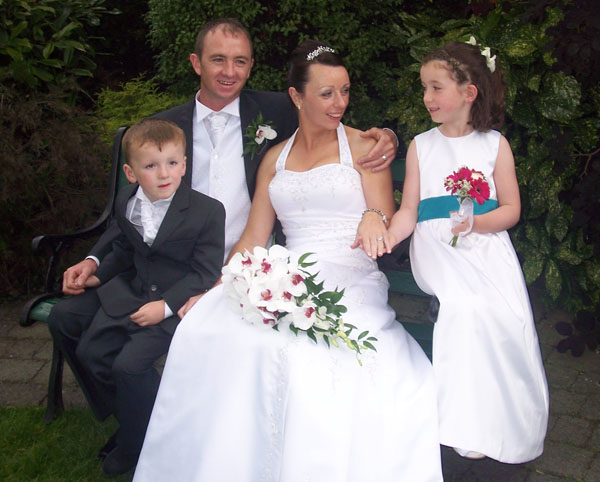 Mikey and Marie with their Pageboy Ciarán and Flowergirl Eimear. 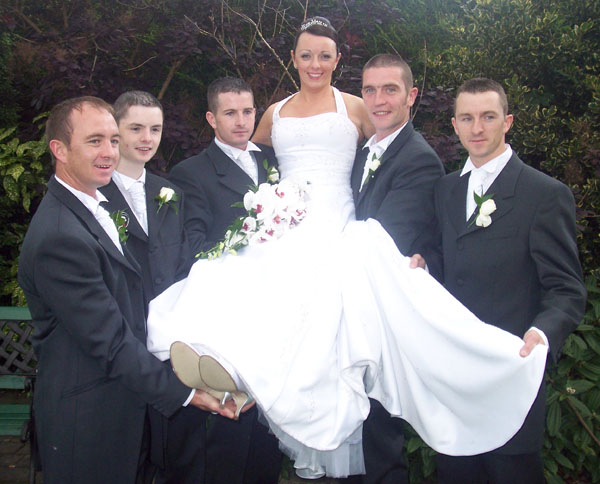 The Build up to Sunday 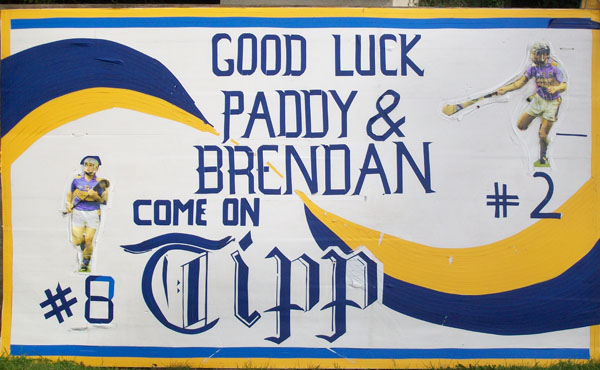 Good luck and best wishes to Paddy Stapleton and Brendan Maher in the All-Ireland hurling final in Croke Park this Sunday against Kilkenny.
Sean Kelly Cycling Tour of Waterford 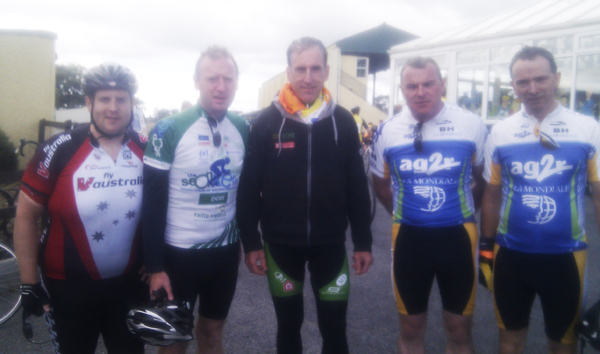 Jason O’ Mahony, Ruairi O’Connell, P.J. Delaney and John Slattery pictured with cycling legend Sean Kelly at the annual Sean Kelly Cycling Tour of Waterford last weekend. The lads cycled 90km from Dungarvan to Tramore returning along the coast road back to Dungarvan and joined over 3000 cyclists who participated in the weekend of cycling in aid of the Irish Cancer Society. 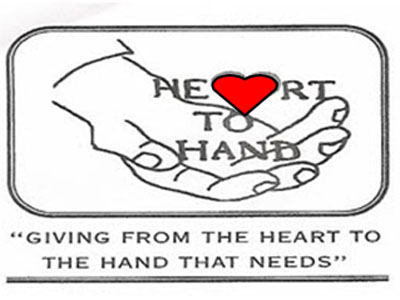 A Table Quiz will take place in Stapleton’s Pub on Friday 3rd September at 9pm in aid of the Albanian Building Project-€20 per table of four. Borrisoleigh’s Gerry Ryan from Cooleen will travel with a group to Albania from 2nd October-10th October.
The group organised by Fr. Celcius Tierney Holycross, travel to Albania under the ‘Heart to Hand’ Charity and will carry out work on Orphanages and Feeding Stations. All funds raised go towards purchase of building materials.
A raffle for two All Ireland Hurling Final tickets, a signed Tipp jersey and other prizes will also take place on the night.

The Registered Charity called “Heart to Hand” was set up to care for the poorest of the poor in Countries like Albania, Bosnia, Moldova, Romania and other countries where the need arise. This care consists of providing food, medicine, clothes and other forms of humanitarian aid, in latter years education and training to help these people fend for themselves has been put in motion. The charity is non-denominational, voluntary and therefore what comes in goes out to help the poorest of the poor. http://hearttohand.net 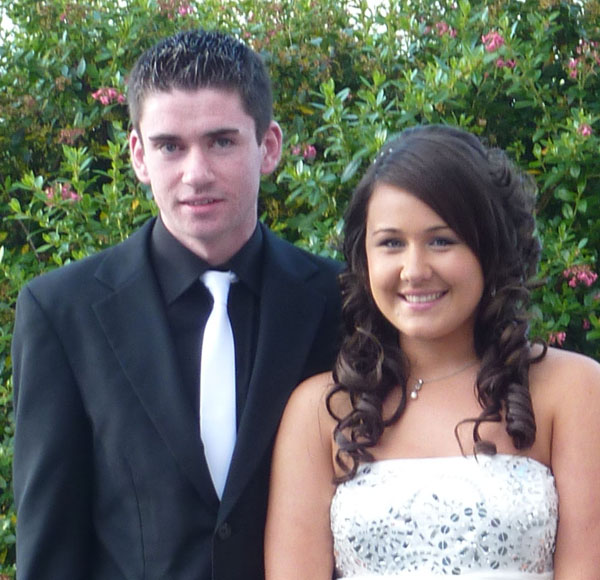 Mairead Delaney accompanied Steven Shanahan to Our Lady’s Templemore Debs ball on Friday night last, 27th of August, in the Templemore Arms. A great night (and early morning!!!!) was had by all.
Borris-Ileigh Juvenile GAA Club

Mick Prior Cup our annual U10 hurling competition in memory of the late Mick Prior a former stalwart of Borris-Ileigh Juvenile GAA Club is fixed for next Saturday 4th September. First games are due to start at 10am. Taking part this year are Borris-Ileigh, Moneygall, Borrisokane and Drom -Inch. This is an important and very busy morning for the Juvenile Club and help is required from committee members and parents with preparing the field and also providing refreshments. Sandwiches, cakes etc can be brought to the Pavillion on Saturday morning.

Best of luck to Paddy Stapleton and Brendan Maher and the Tipperary panel in the All Ireland final against Kilkenny in Croke Park next Sunday. Hurling News, U16s were beaten by Portroe last week and are now in a play off for a quarter-final place. We have been drawn against Portroe again with the winners playing Burgess in the quarter-final. U12 Plate, after a fine win against Borrisokane, we lost to Shannon Rovers in the second
round. We are due to play Silvermines this week in round 3. U14 we played in the Martin Cunningham Tournament in Roscrea and emerged winners with wins over Kilcotton and Roscrea in the semi-final and final respectively. Thanks to Roscrea for the invitation and hospitality on the day. We are due to play our U14 county semi-final against the West champions on the w/ending 11/12 September. 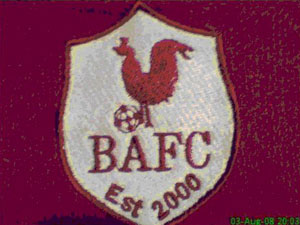 This past week has seen the new Premier Division season kick off in style with a well earned 2-0 win over Thurles Town in Borrisoleigh on Sunday last. With every three points needed this season a win here was vital and was obtained without ever hitting top gear. Borris started brightly controlling the tempo with some neat passing, especially from midfield dynamo Jody Harkin. Last seasons captain bossed the Thurles side from start to finish, linking up the back four with the top two continually through the match and winning the battles in both the air and on the turf. Half time saw the neither team break the deadlock. Borris should have been at least one goal to the good at the break. Noel Kent went agonizingly close on three occasions after some fantastic individual work. Matthew Stapleton was put clean through with a fine ball from Martin Ryan but the winger sent his effort wide with the goal at his mercy.
The second half saw Borris take control and it wasn’t long until goal machine Noel Kent broke through the Town defence to slot home with ease. Kent went from scorer to provider shortly after when his corner kick was met by the head of Martin Ryan at the front post. The game could have finished on a far greater score line but our shooting boots let us down on a few occaions. Next up is Nenagh Town who we play at 4 o clock on Saturday at the Nenagh Venue. 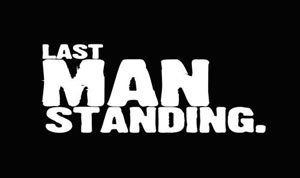 The 11th of September will see the start of the Last Man Standing competition. Again the format is the same as last year. The entry fee is €10, while the prize money has been increased to the princely sum of €400. Club members will be going around the town in the next ten days so have your tenners in your wallets and your footballing brains ready to be engaged. 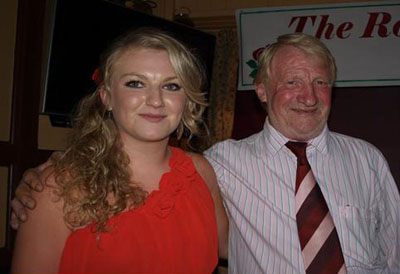 With the week that was in it, where Claire Kambemettu was crowned Rose of Tralee we wonder how our recently crowned Rose of Borris Tom Young (Twin) would have fared at the international stage of the competition. We’re guessing he could have gone all the way!!!!! Tom is pictured here on stage with Noreen Stapleton who escorted him on the night.
On Holiday from Canada 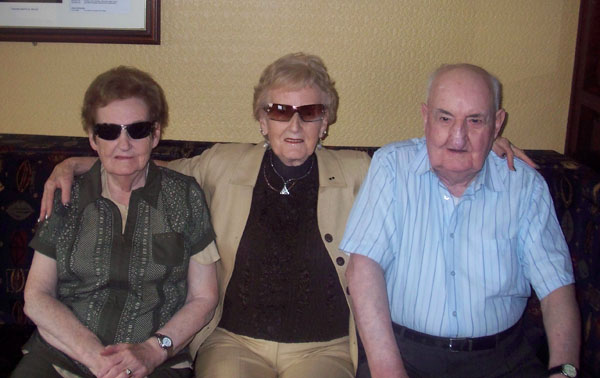 Dill Hynes, who is home in Borrisoleigh on holiday from Canada, is pictured here with her sister Marie and brother Seamus. 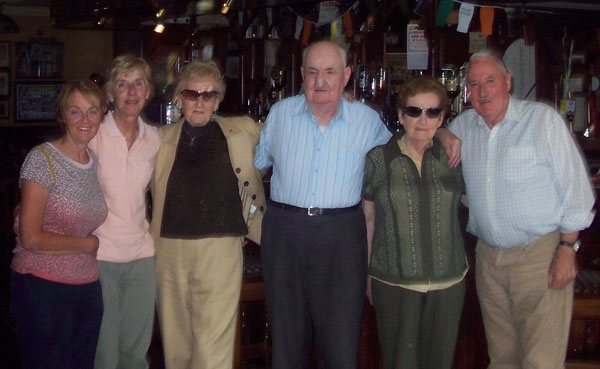 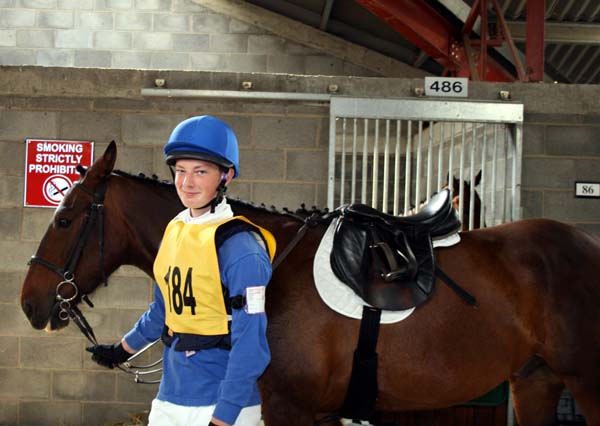 Sean in action on his horse "Gonzo"

Next draw: Thursday 2nd September in Stapleton’s (Cross of Pallas) 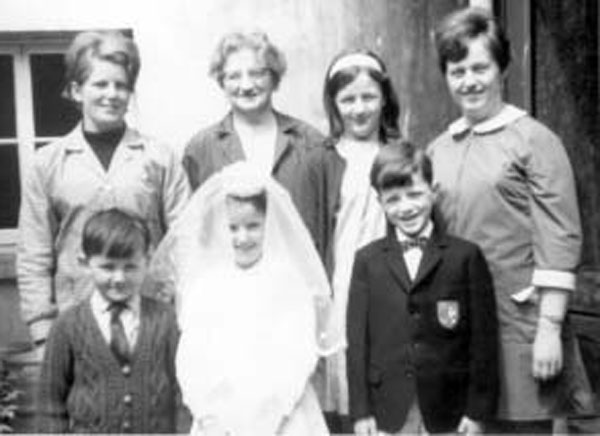