05 May 2010
Elaine Climbs the Himalayas for Barnardos 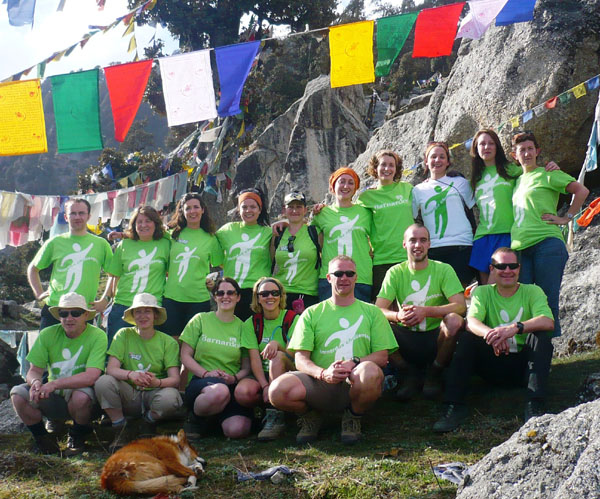 Elaine Hurley of Pallas Street would like to thank all those who helped her to raise €5,600 for Barnardos Children’s Charity over the past few months. Along with nineteen others, Elaine raised the money as part of a sponsored five day trek in the Indian Himalayas.
About Barnardos
Barnardos supports children whose well-being is under threat, by working with them, their families and communities and by campaigning for the rights of children. Barnardos was established in Ireland in 1962 and is Ireland’s leading independent children’s charity.

More information can be found on Barnardos at the following website: http://www.barnardos.ie/

Elaine in the middle of some of her Himalayan fan club! 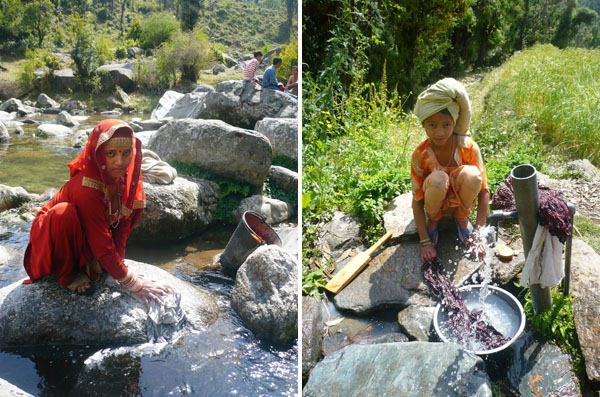 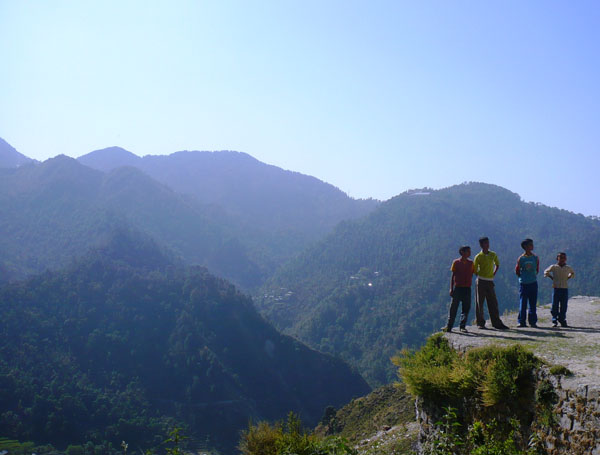 Spectacular view of the Himalayas
Spring Clean-up at Fantane 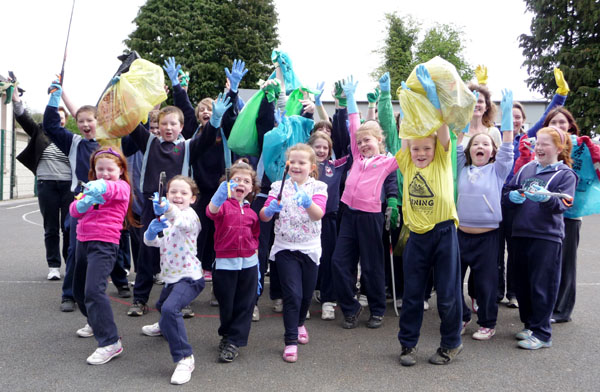 Children, parents and teachers of Scoil Bhríde, Fantane after their Spring Clean-up recently

Fantane N.S. held it`s annual spring clean on Thursday the 29th of April. The children armed with bags and gloves and accompanied by the staff and a number of parents made sure that the grounds of their lovely school and the surrounding area were litter free. A great mornings work by all ! 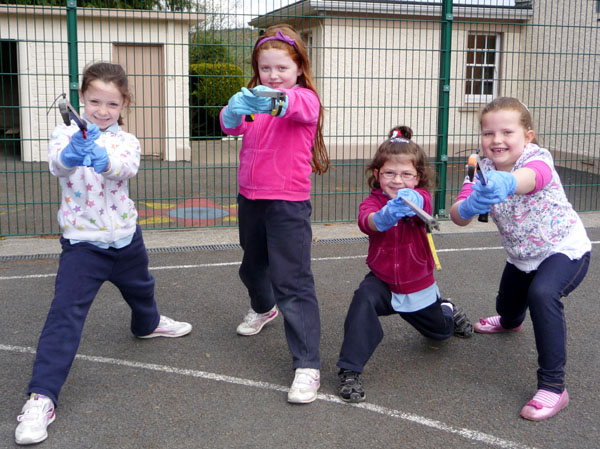 No one said we couldn’t have fun on the job! 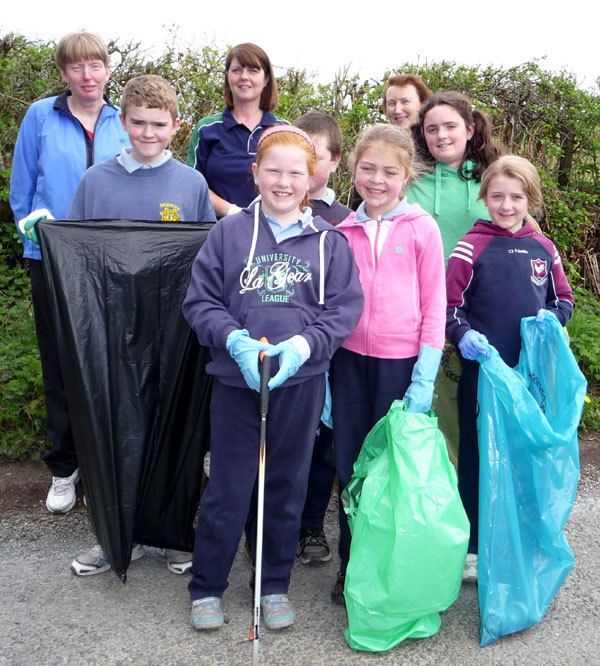 Making the road to our school a cleaner path to travel 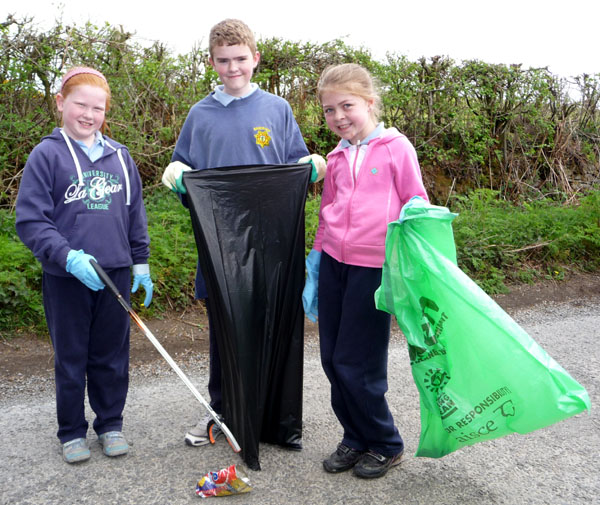 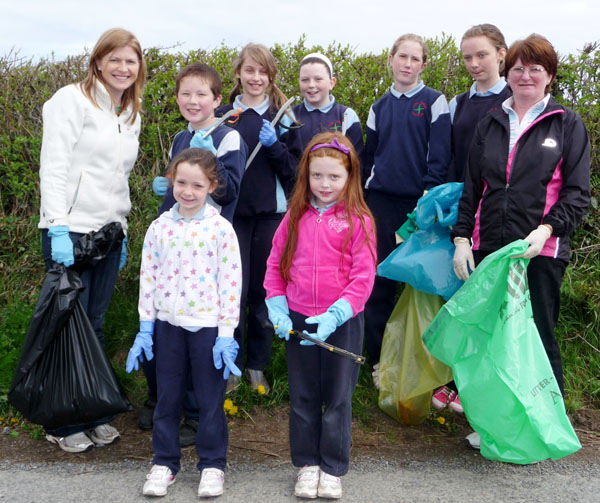 Miss Ormond with Noreen Ryan and a merry bunch of helpers! 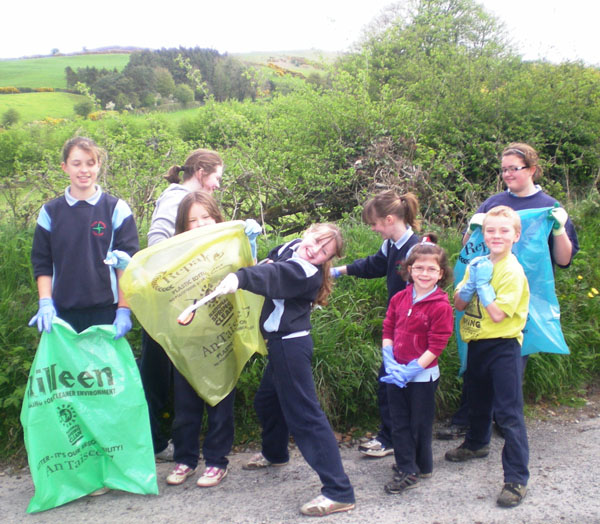 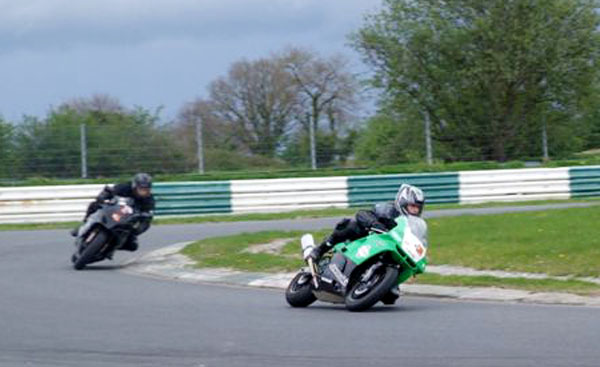 Kevin Kennedy of Garranagrena leading the way at Mondello Park, his first day racing on his Kawasaki 600
Clodagh Macra News 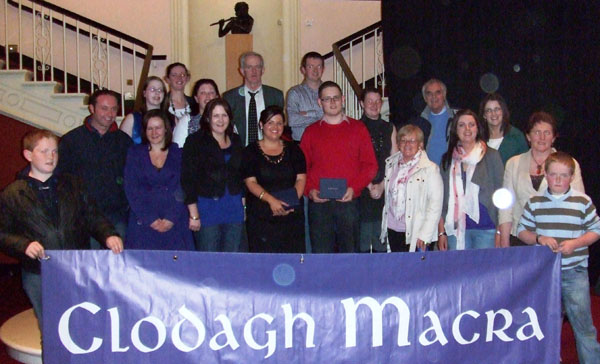 AnneMarie Kavanagh and Rory Kennedy, both runners-up in the Macra National Talent Competition, with friends and supporters after the competition which was held in The National Concert Hall on Sunday last
Congratulations to Clodagh Macra members, AnneMarie Kavanagh and Rory Kennedy who both competed in the National Talent competition and both came away with second place. The final was held in the National Concert Hall on Sunday last. AnneMarie was competing in the solo singing competition and beat off competition from Roscommon and Cork, and took second place behind the Cavan representative. It was an all female affair and the standard was very high. Anne Marie sang Galway Bay and accompanied herself on guitar. Rory Kennedy from Templederry, was competing in the solo instrumental competition on his concertina. This was also another very hotly contested competition with a tin whistle player from Limerick taking the honours on the night. It was great for the club to be represented so well and we would also like to thank the great supporters who were there on the night. Some well deserved celebrations were had afterwards. 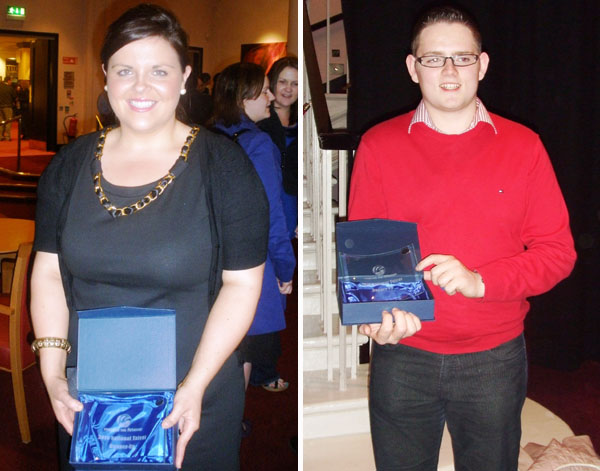 AnneMarie and Rory displaying their wares!
Kate graduates in the caring profession 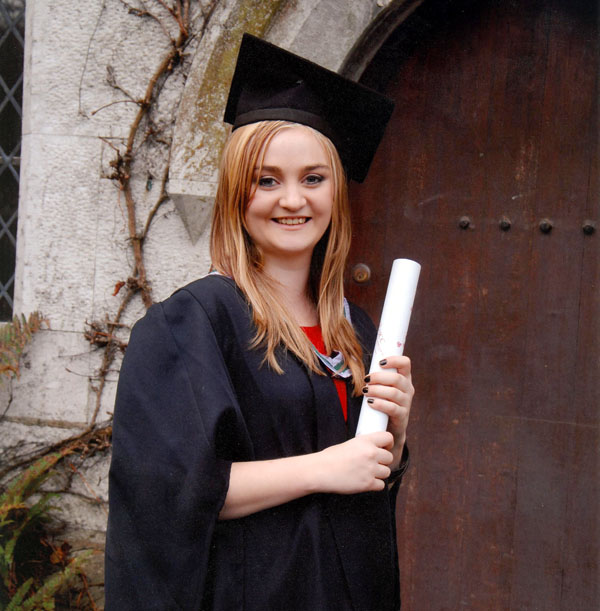 Two views of the nearly-completed Community Centre on Pallas Street

A meeting will be held in The Boys’ National School next Monday evening May 10th at 8p.m. to elect a management committee for the New Community Centre on Pallas Street. All are welcome to attend.
Who ya gonna call?!!! 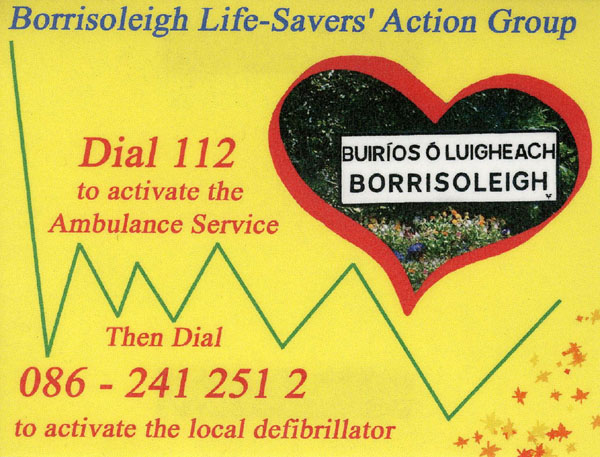 Vital Defibrillator information for everyone in the community
If you require one of the defibrillator information packs, which include an information letter, information cards and fridge magnet, please contact Paula, Christina or Úna (see numbers below). This list below is of the volunteers who are trained in the use of the defibrillators in our community. So far, thirty volunteers have been trained and are revalidated on a three-monthly basis; the revalidation of groups 1 and 3 will take place on Saturday May the 8th. The on-going work of this group is vital in making Borrisoleigh a safer place for hearts to be! 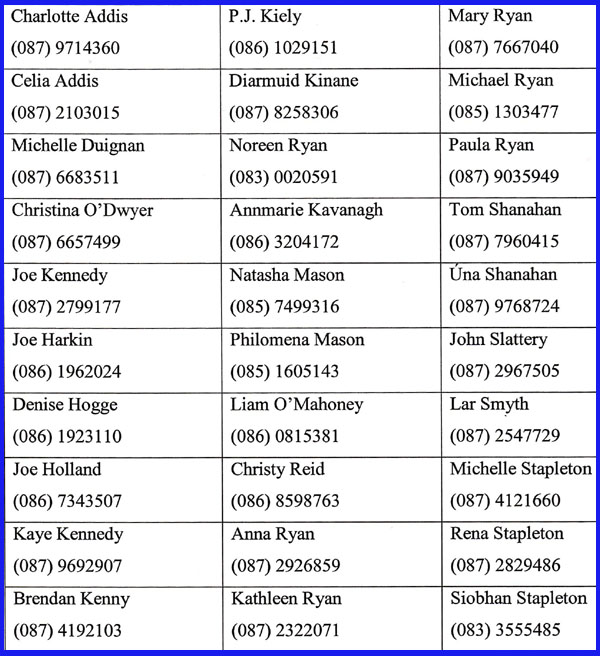 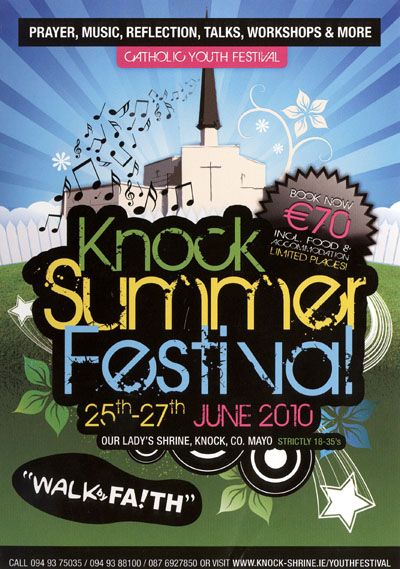 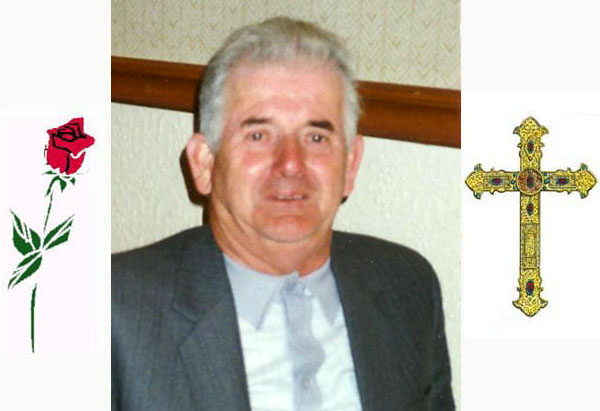 Tom Ryan (Murray), Cappanilly RIP
The death has occurred of Tom Ryan (Murray of Cappanilly on Wednesday 28th April last. His Funeral Mass took place in the Sacred Heart Church Borrisoleigh on Friday 30th with burial in St. Brigid’s Cemetery. We offer our deepest sympathies to his family and friends. May he rest in peace.

The Ragg Lounge
Saturday 8th May

Tickets available at door or from:

All proceeds go directly to The Irish Cancer Society.
Your support would be greatly appreciated. 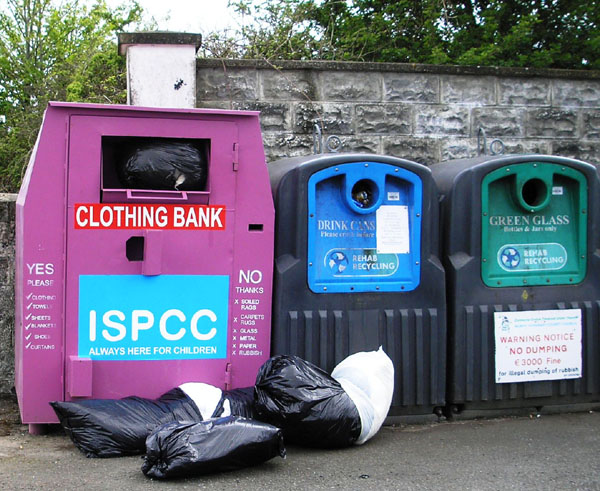 Despite repeated attempts to keep the bottle and clothing banks on the Thurles road clean and tidy, some people still insist on treating them as a rubbish dump. Here are bags of used clothing just abandoned when there is absolutely no need for this to be happening. If the clothing bank is full why not do our community a huge favour and just pop down the road to the Clothing Bank at Bourkes Hardware in Rathmoy!!! 99.9999% of those living in the local community would very much appreciate it!!! If persistant abuse of the bottle and clothing banks continues then they may have to be removed altogether! Do you want to be responsible for this?!
Pic of the Past…down memory lane 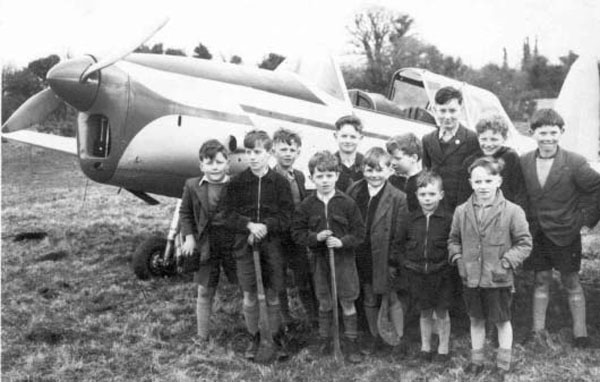 Cooke’s Field: This was a popular airfield in the 1950s

Website Committee: Enda Ryan, Noreen Fahy, Margaret Cowan, Aileen Óg Groome, Marie McGrath and Michael Barry Many thanks to all those who contributed photographs and news items for this weeks current news. Well done!
Send your email to: info@borrisoleigh.ie
Also, if you like what you see and want to leave a comment, remember to use the Guestbook!