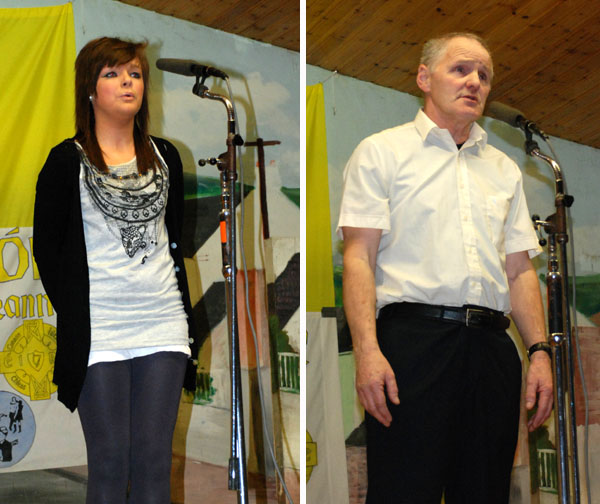 Claire Kavanagh begins the Scór proceedings with her sweet rendition of Amhrán na bhFiann while Paddy Dolan wows the audience with his version of The Galway Shawl. 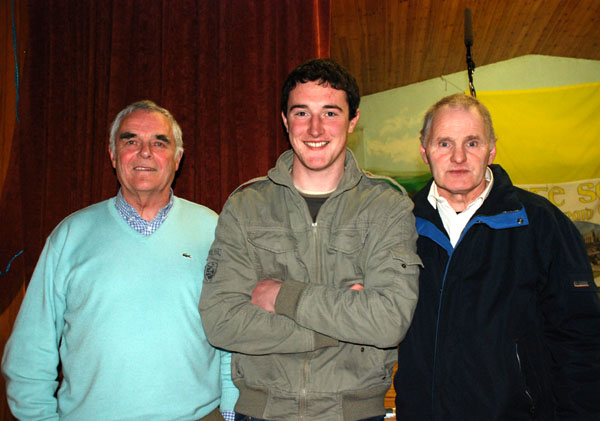 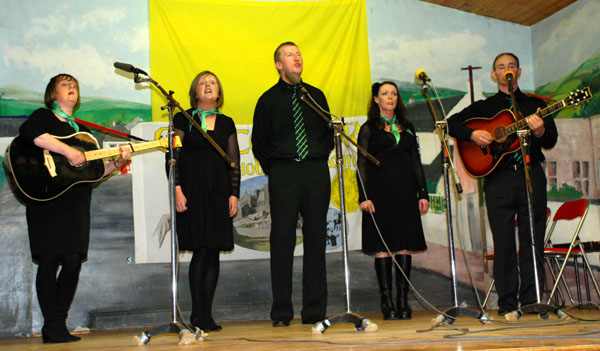 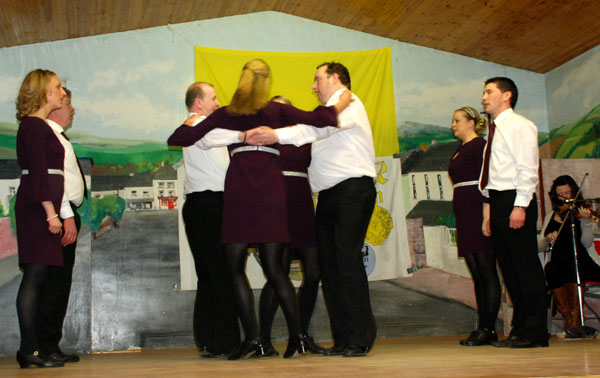 The set dancers with their version of Ring-a-Ring-a-Rosie…….. 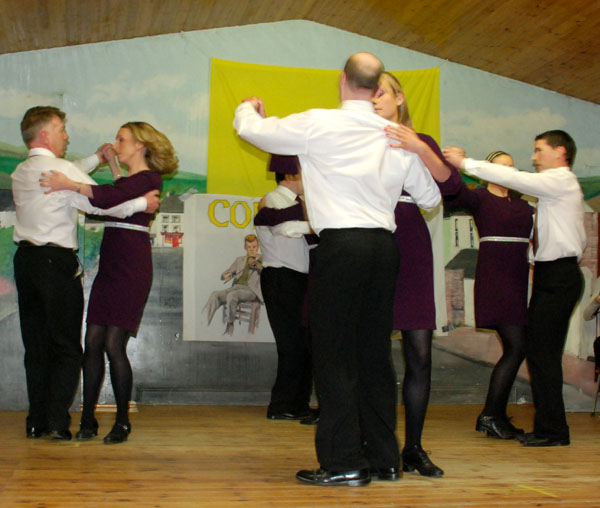 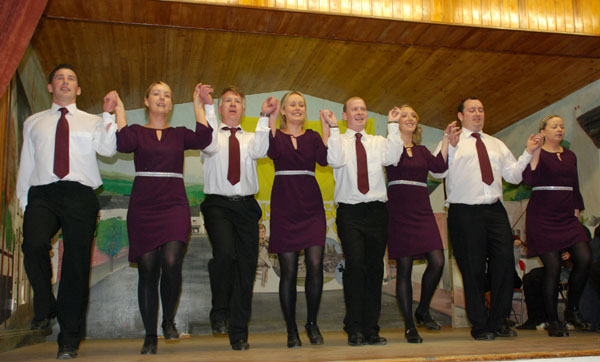 The victors take a bow!!
Oh the Tipperary County Scór Committee knew what they were doing when they chose the Marian Hall, Borrisoleigh as the venue for the Senior Scór Final on Saturday night last.  What a night it was!!  Between the quality of the performances on the stage and the atmosphere in the Hall, a thoroughly enjoyable night was had by one and all.  Claire Kavanagh opened proceedings with a beautiful rendition of Amhrán na bhFiann.  Much comment was made on the fabulous hospitality provided by the Borrisoleigh Scór Committee on the night.  Each competition met with the highest of standards and the very best of luck to all who succeeded in progressing to the next round.

Our local competitors did us proud with the Question Time team and the Set Dancers coming out on top.  They are on stage again next Saturday night in Cappamore, at 7.00 p.m.  Why not come along and cheer them on.  The very best of luck to them.

On Friday 26th February a Table Quiz was held in Stapleton’s Bar to raised funds for The Haven Partnership’s Build it Week 2010.  Enda Ryan has volunteered to spend a week in Haiti with Haven at the end of April.  There was a very good turnout and a fun night was had by all, helped by the ever witty quiz master, Thomas Russell.  The total funds raised on the night came to €1,340 and Enda would like to express his appreciation to everyone for their support.  He would also like to thank Breed Cowan for providing the venue and the finger food, Donal Hurley, David O’Connell, Anna Ryan, Glenarisk, Anna Ryan, Coohaun, The Pantry Cafe, Nenagh, The Wine Buff, Nenagh and The Templemore Arms for sponsoring spot prizes.  If anyone still wishes to contribute they can do so by dropping their donation to Anna Ryan in O’Connell’s Pharmacy. 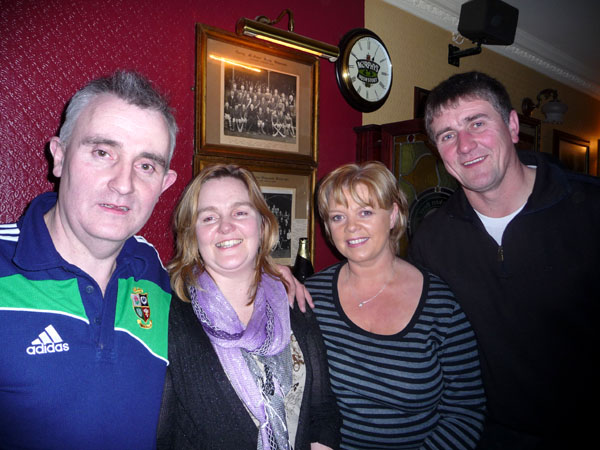 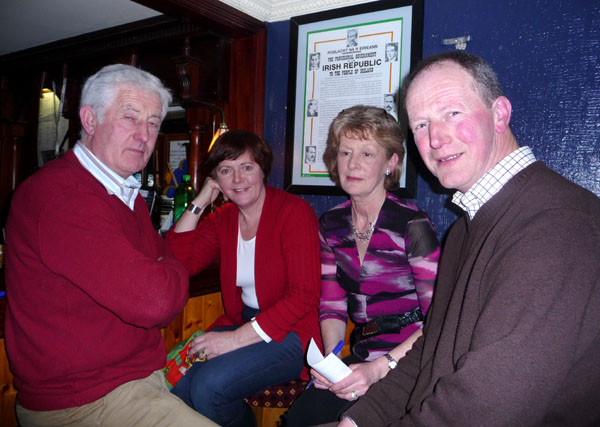 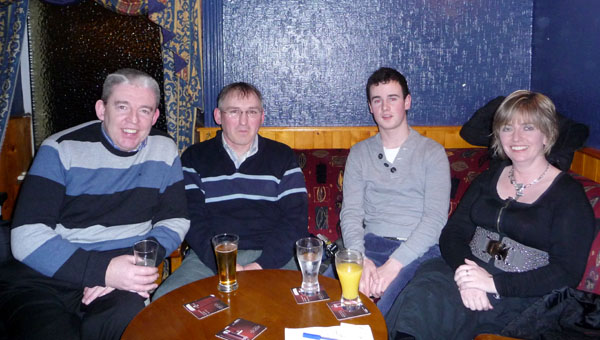 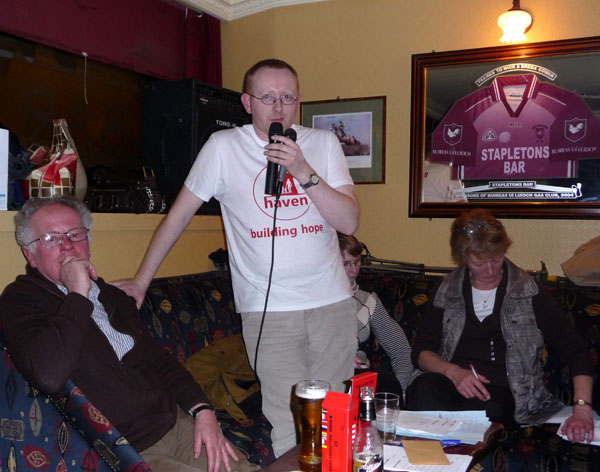 A ‘Topsy-Turvy’ non-uniform day was held in Scoil Mhuire na nAingeal, Clonmel in February.  The parents & children, the Sisters of Charity and the Staff of the school raised a massive €3,289 for Haiti.  They are delighted to give this donation to the Haven Foundation to help build houses for the people of Haiti. 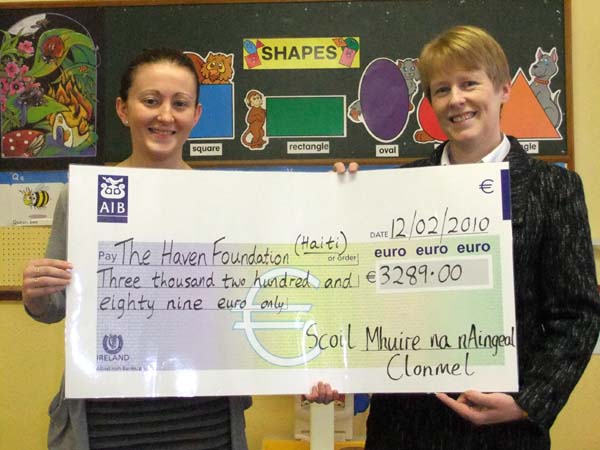 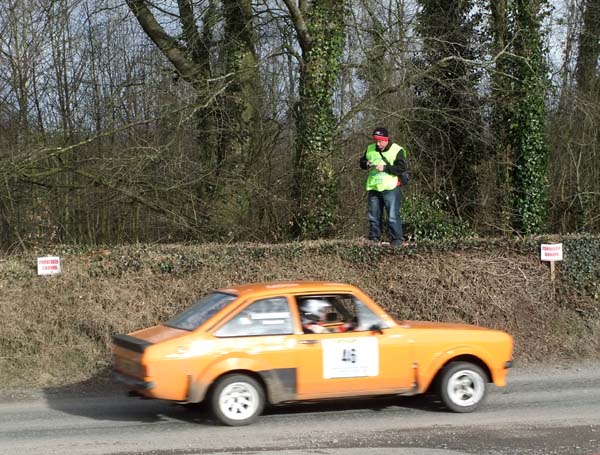 On Sunday 28th February the Nenagh Stages Rally organised by the Birr & District Motor Club took place near Borrisoleigh.  Stages 1, 3 & 5 of the Rally took it through Latteragh, Gortagarry, Killoskehane and Barnane. This is a selection of photos of some of the competitors as they passed through Killoskehane. 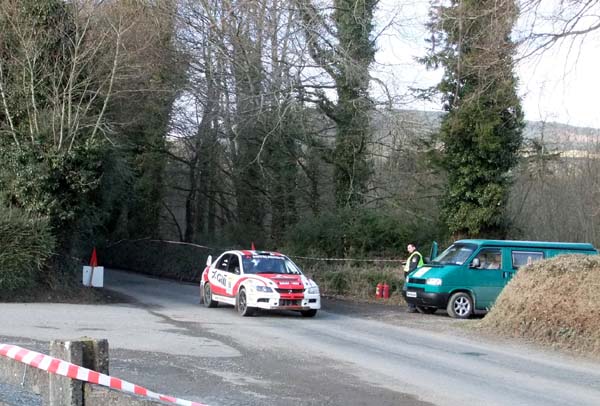 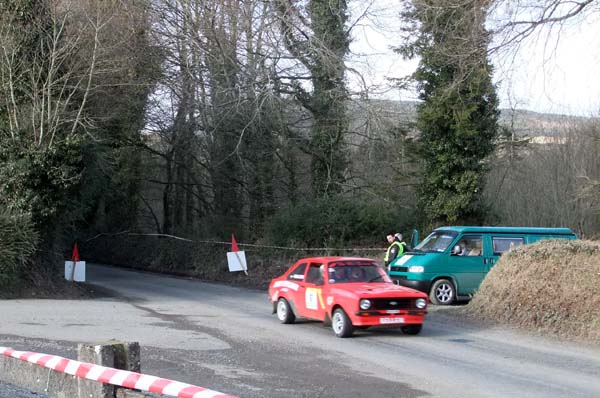 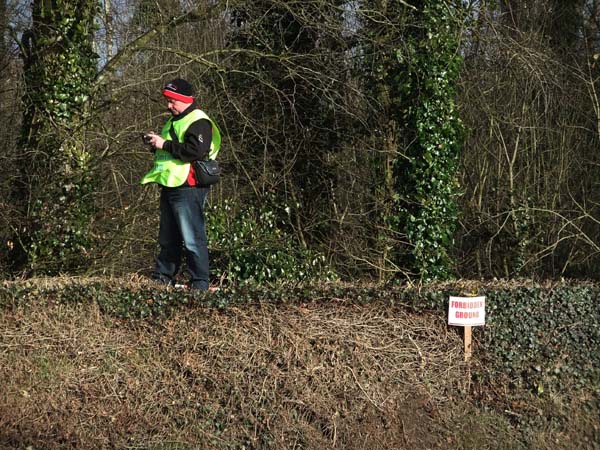 Borrisoleigh Camoige Club
Borrisoleigh Camogie Club Junior training takes place this Thursday 4th of March at 6.30 pm and also on Saturday 6th of March at 10.30am.  All players are expected to attend and new members are very welcome.  Also insurance is due for the year at €30 per person.  A Committee meeting will be held in the Pavilion on Thursday 4th March at 7.45pm.  All members are urged to attend.
Pyjama Day for Haiti 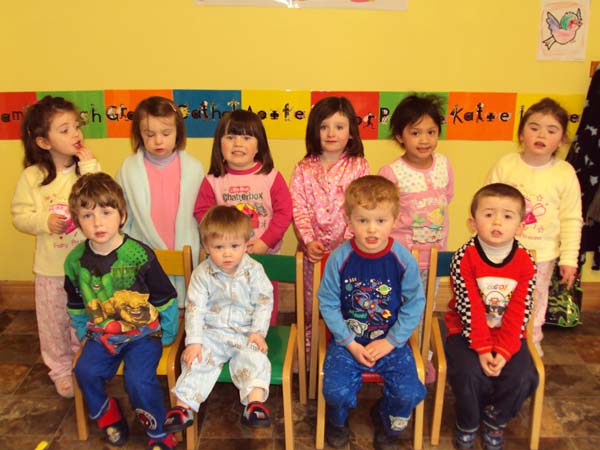 Pictured here are the children of Fifi’s Tots Preschool who held a Pyjama Day recently to help raise money for Haiti.
Thanks to everyone for their donations. We raised 180 euro.
KellieKellyCards for all occasions 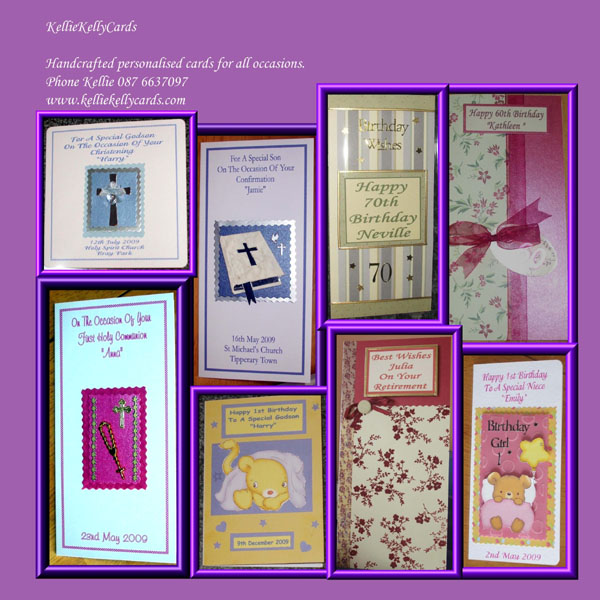 A sample of Kellie’s Handcrafted Cards

Thanks to all who contributed so generously to the juvenile club annual church gate collection last weekend. It is very much appreciated. Thanks also to all who gave their time to stand at the gates for each mass.

We entertained Inniscarra from Cork last Saturday in U14 hurling and football challenge matches, we hope to make a return visit to Cork in the very near future.

Membership; if you have received your membership forms please return both form and membership fee as soon as possible, for those not returned we are holding a registration night on Friday 12th March from 7.30pm to 8.30pm in the Town Park Pavilion. It is important to return membership forms as we need to update all mobile numbers on our text lists. 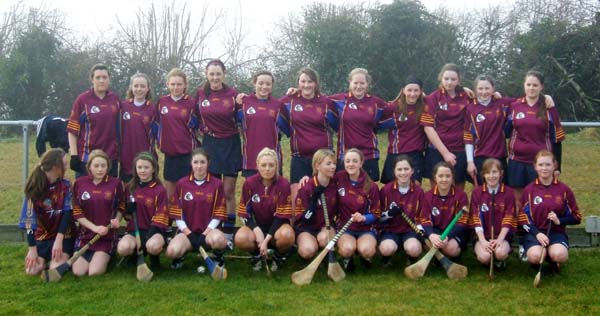 St Joseph’s College Camoige team played St Bridgid’s Vocational School, Loughrea in a Junior ‘A’ All-Ireland Semi-Final on Saturday 27th February in Templederry.  Unfortunately the girls came up against a stronger team and were unsuccessful on the day, however they all played well and the opposing goalie had to make several successful saves to keep St. Joseph’s out of the All Ireland Final.  Well done to the team and their trainers on their success in gaining a Munster title on their first year in Division A.
Thank You

Marian Dolan of Mount George wishes to say a big big ‘Thank You’ to those who came to her assistance on Pallas Street last Wednesday after she had a bad fall on the footpath. She is deeply grateful to the numerous good samaritans who came to her aid. (That being said: something really needs to be done with the footpaths as they are in a dreadful condition. Perhaps someone in the Council will take note and take action!)

As the preparation and uploading of our weekly Current News can be time consuming, we would appreciate if news items/photos etc could be submitted to info@borrisoleigh.ie by 8pm Tuesday evening in order to guarantee inclusion. 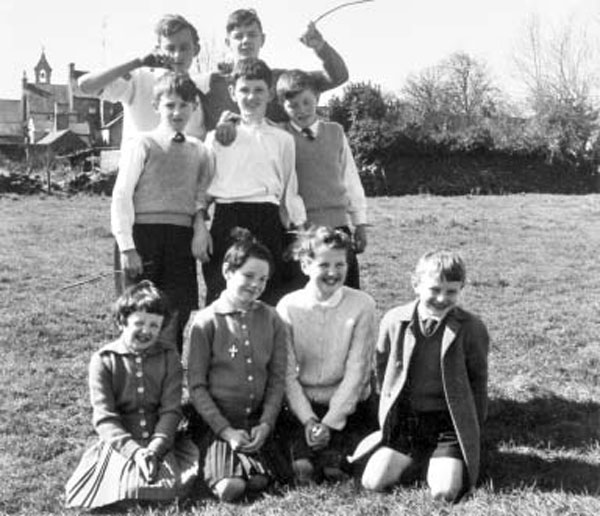