Get Your Dancing Shoes On!


Tickets available from any of the Community Complex Development Committee


Will the Real Rose of Tralee Please Stand Up? 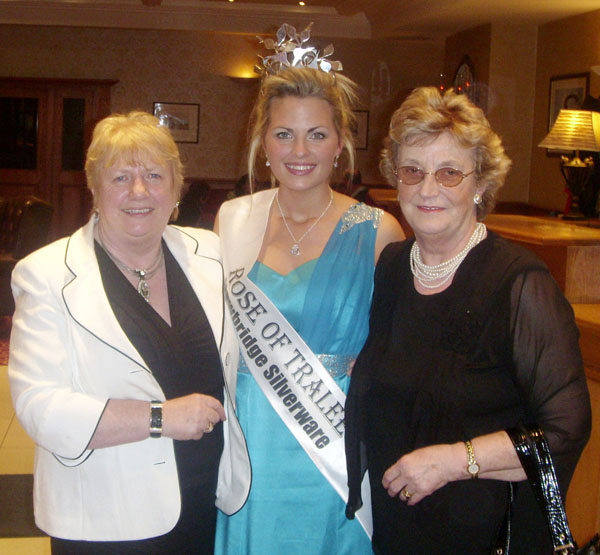 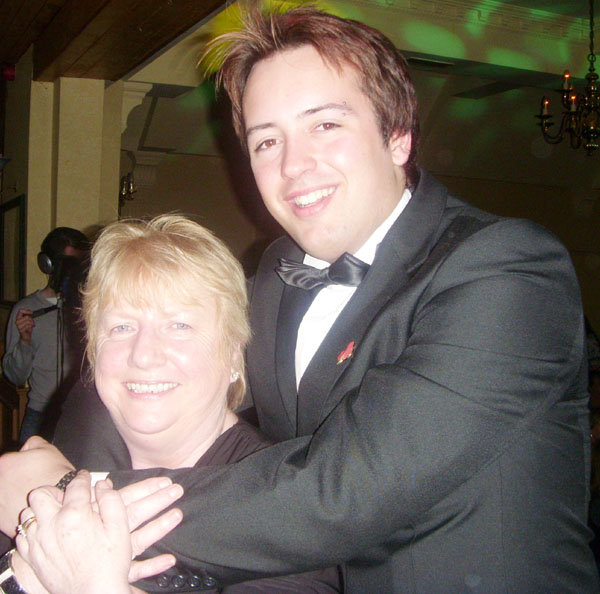 Shane Smyth of Currnaboola, Borrisoleigh with Frances Kennedy, Cullohill. Borrisoleigh. Shane is all set to take part in the competition for escort at The Tipperary Rose Contest which was held in the Anner Hotel on Thursday night last April 23rd. 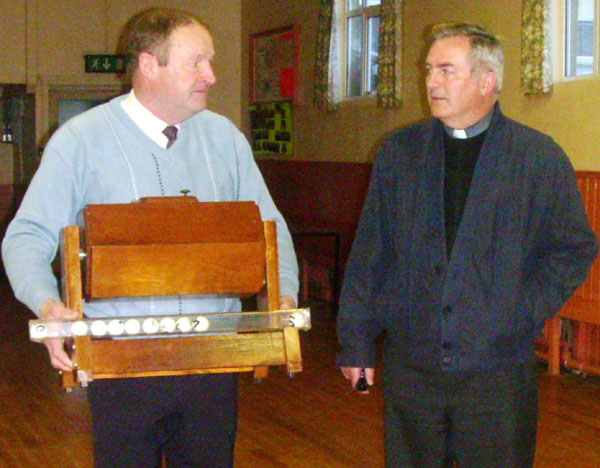 T.F. Stapleton checking it once, checking it twice with Vera and Jack Hogan lending a helping hand Draw Results 25/4/2009

The results of the Borris-Ileigh Parish Centre Draw which was held in the Marian Hall on Saturday 25 April were:

Presentation evening for All Ireland Champions

St. Joseph’s College, Borrisoleigh, victorious Junior Camogie team are having their presentation evening on Wednesday 6th May 2009 in the School Hall at 7pm. All players, their parents, staff and supporters are welcome to attend and celebrate the school’s first All Ireland success. The presentation will be made by Tipperary Senior Hurling Captain and past pupil, Willie Ryan.

Tipperary Mountain Trekking Centre, is based at Rusheen, Borrisoleigh, Tipperary, Ireland. We provide pony trekking in Tipperary as well as Trail rides through the mountains and some of the finest off road horse riding you will experience in Ireland or anywhere in Europe. They specialise in Horse Riding Lessons, Horse Riding Treks, Horse Riding Holidays, Residential and Non-Residential Summer Camps for children who want to immerse themselves in the horsey lifestyle. They also cater for large groups like School Tours and Riding Clubs on a non-residential basis and also run introductory courses for adults on equine behavioural psychology and horse ownership. Accommodation is available for Residential Camps and also on a Bed & Breakfast basis in Rusheen House which is  accredited by Bord Failte, Responsible Travel (the ethical tourism company) and Sawday’s Special Places to Stay in Ireland. For more information please visit www.timotrec.com 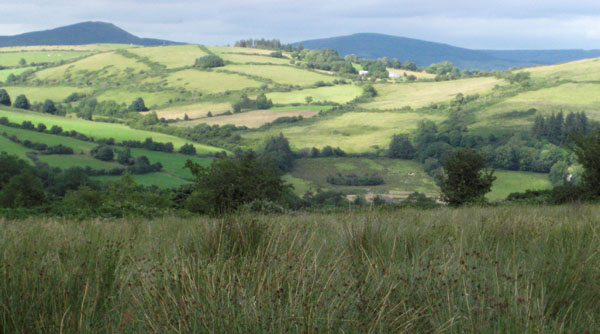 View of ringfort from the top of the Black Hill 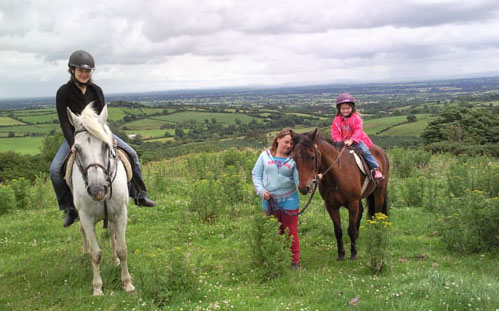 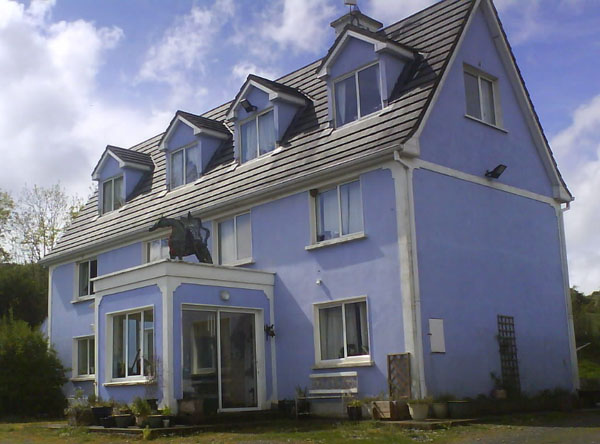 Rusheen House (the dragon is a wicker sculpture made by local artist Lyn Kirkham, from Killea). 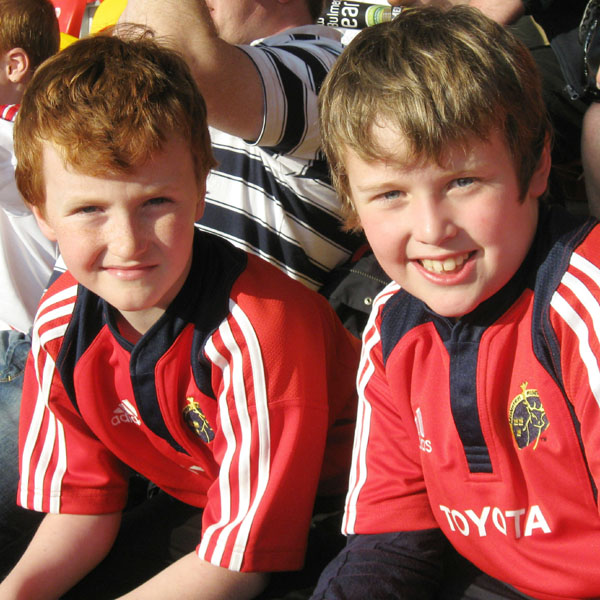 Our local Health Centre is progressing so swiftly that construction work had to continue around pre-existing electricity wires.
There was no time to wait for them to be re-located!!

Home on Holidays from Down Under! 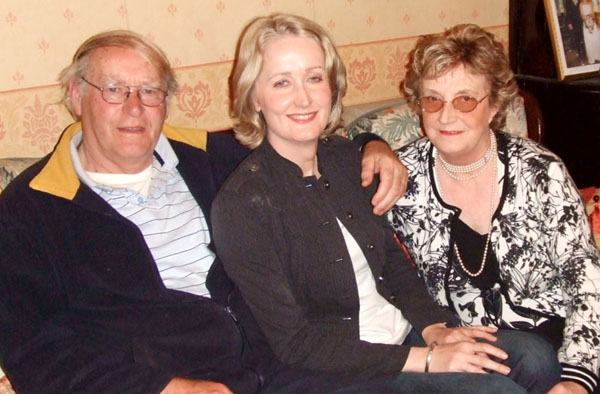 Dominica Ryan (Bradley) pictured with her Mam and Dad, Pat & Mai Ryan of Curraghgloss. Dominica has spent the past 15 years in Australia, and frequently returns on holiday to visit her family at the old homestead in Curraghgloss. 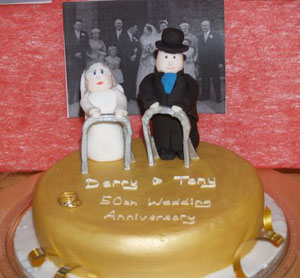 The Golden Wedding Anniversary of Derry Fox nee Lennon and Tony Fox was celebrated with family recently in Cyprus.  Mary Lennon enjoyed the Greek Easter at St. Paul of the Pillar Church. The Mass was said entirely in Latin which was memorable as Mary remembered the whole of the Mass and the hymns also in Latin 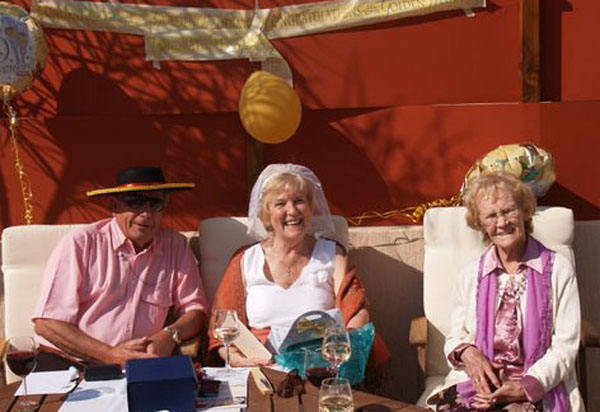 "Cock a doodle do" 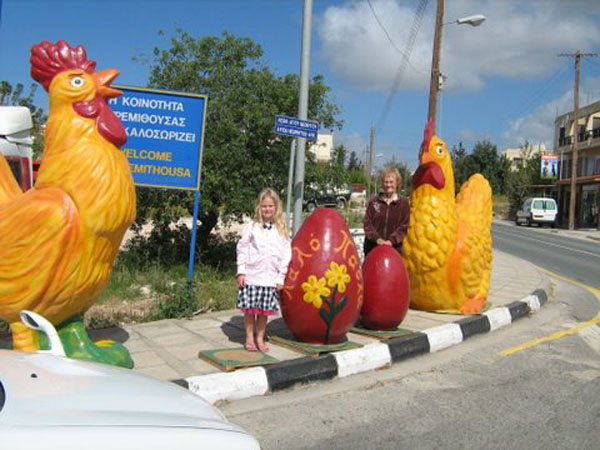 Meaghan with Mary Lennon out and about enjoying the sunshine

Borrisoleigh Ladies Soccer Club is up and running again after a break of 3 years. Their first match against Blackcastle was played on home ground on a glorious sunny day. The home team were defeated with a score line of 6-2. Eimear Stapleton and Grace Ryan scoring the goals.
The second match of the season was against The Commons. Borrisoleigh were the victors on this occasion, with 2 great goals from Emma Treacy and 1 from Kristina Kenneally. The final score was 3-1.
Training takes place on Wednesday evenings at 7.15pm in the scooer field. New players are very welcome. No experience is required. 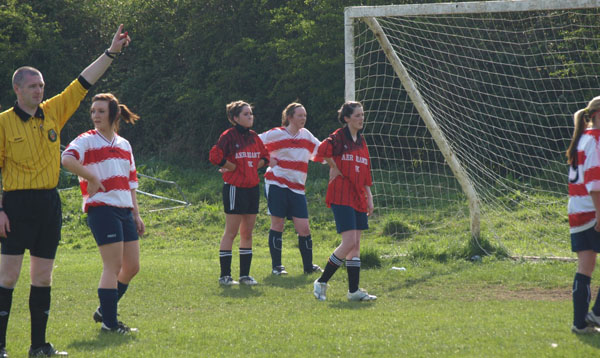 Hey Aoife the Ref is pointing the other way!! 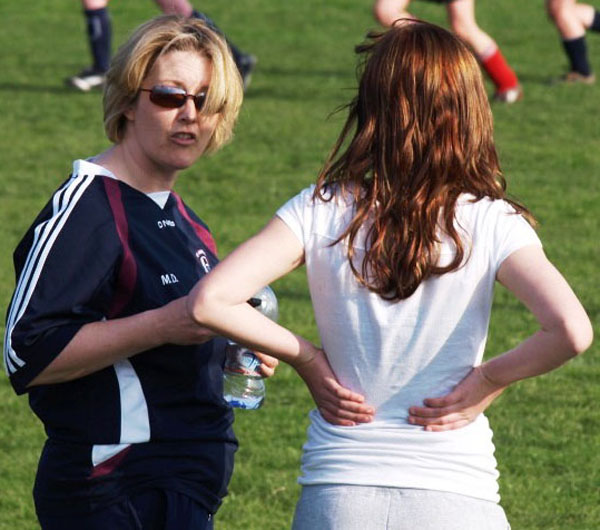 Michelle Duigan, Coach with Nicole Walsh turning her back on the situation 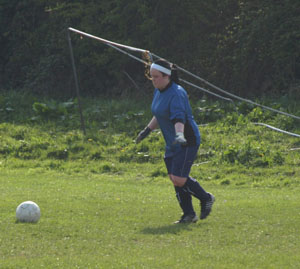 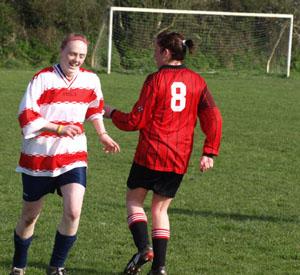 Have the goals collapsed around the goalie!!      Are the girls dancing a reel or playing soccer? 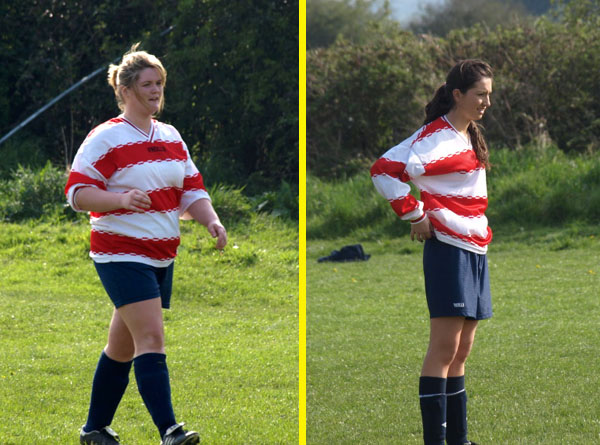 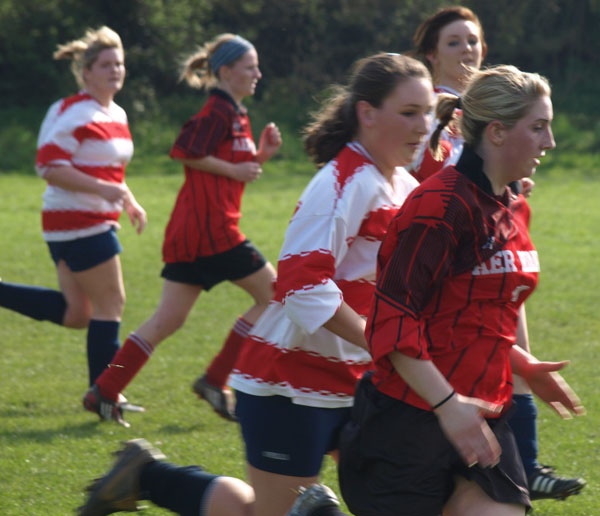 Girls trying to out run each other 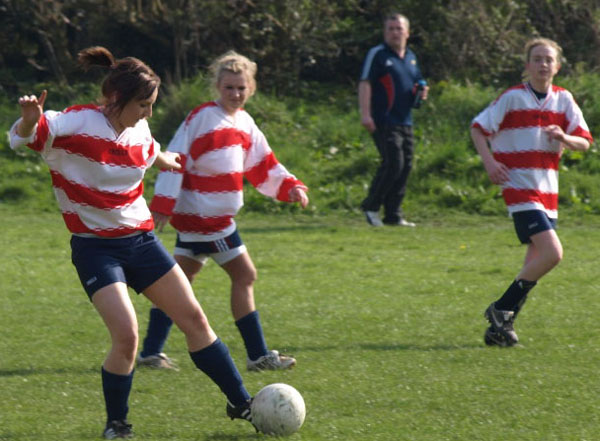 Dylan Reid, Thomas Ryan and Páidí Scanlon were part of the North Tipperary Emerging Talent Soccer squad. The boys travelled to Bolton during the Easter break. They enjoyed training sessions with Bolton and Preston North End. They attended the UEFA match between Manchester City and Hamburg. The trip finished off with a match against a Preston North End side with North Tipperary coming away victorious. Well done boys! We will be keeping an eye on you!! 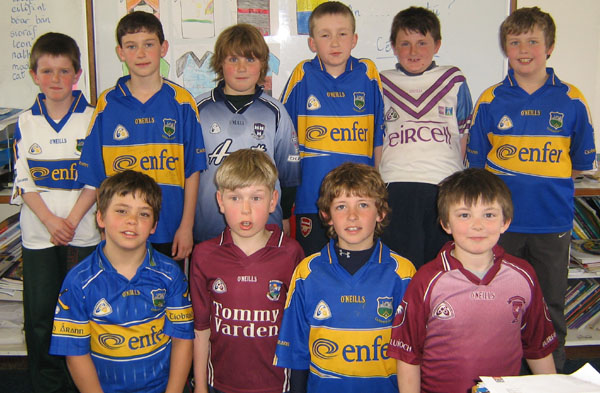 As part of the GAA 125th Anniversary celebrations Friday, April 24th 2009 was designated GAA Day in schools throughout the country. The pupils and teachers of St. Patrick’s Boys’ N.S. embraced the spirit of the day by organising a special GAA themed day within the school.

The chance to shed their uniform for the day led to an array of colourful jerseys throughout the school, their colours outdone only by the imaginative designs for futuristic jerseys in Third and Fourth Classes. Thirteen counties were represented on the day, with a large number of Borris-Ileigh and Tipperary jerseys to the fore. Particularly noteworthy was the ‘Rath Muigh’(or Rathmoy!) jersey, designed and produced by past-pupil, Cathal Bourke! 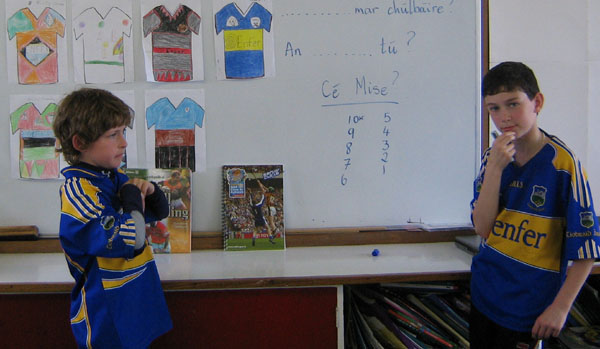 All subjects centred on a GAA theme and the boys were delighted to realise that they had actually done Geography, History Irish, English and Mathematics as
they discussed championship fixtures, studied graphs, completed crosswords and quizzes and played games such as ‘Ce Mise?’ involving their GAA heroes. 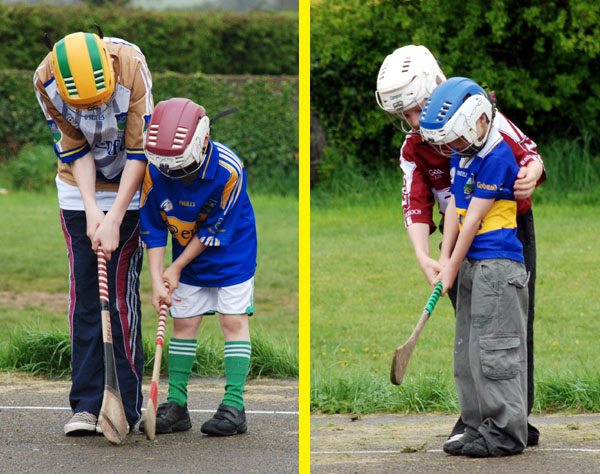 The younger boys really enjoyed the hurling skills sessions with their heroes from Fifth and Sixth. All are looking forward to
the hurling season ahead as we prepare for the first round of the Schools’ Championship 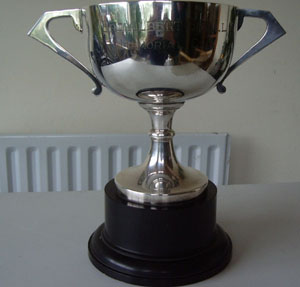 This year all teams will be called one of the provinces of Ireland. All players must bring their own jerseys, with colours appropriate to their own team.

Borrisoleigh holds a significant place in the history of my family here in Australia as some of us have been there including Mark and Maree O\’Grady, Patricia Parker, Peter Meredith ( I am Peter’s brother, son of Kathleen a twin to Terese. Some of your residents have visited us here. I am the grandson of Ned and Kitty O’Shea (nee Ryan). Kitty was born on 9/1/1900. I would like to be able to gain access to any information regarding their lives and their departure from Ireland in the early quarter of the 20th Century. If any information could be provided, that would be greatly appreciated. Thanking you, Tony Meredith (tony.meredith@hotmail.com). 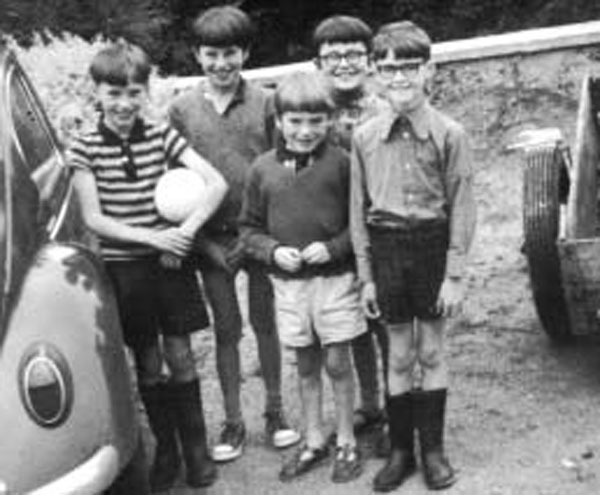 Dan Doolin, John, Gerry and PJ Quinlan with Francis Doolin, all from Ballyduff