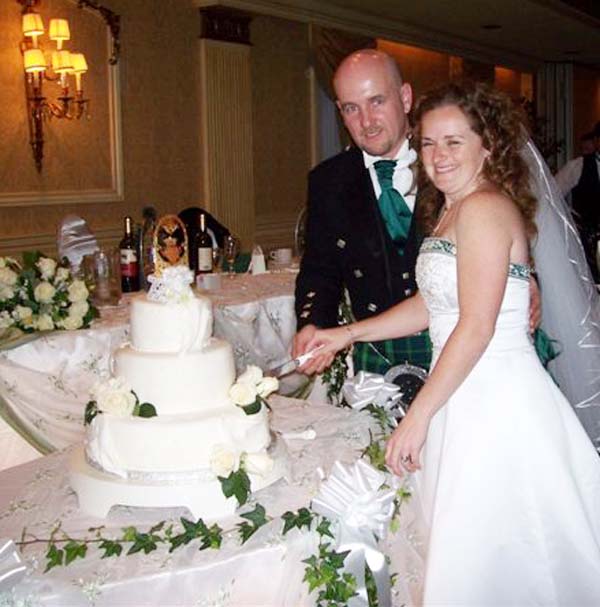 Aidan Shanahan, of Knockbrack and Angela Mullaney of Toronto, Canada, who were married on the 4th October. Aidan’s mum and members of his family spent an enjoyable week in Toronto, including a visit to Niagara Falls. Aidan and Angela are currently honeymooning in Mexico. 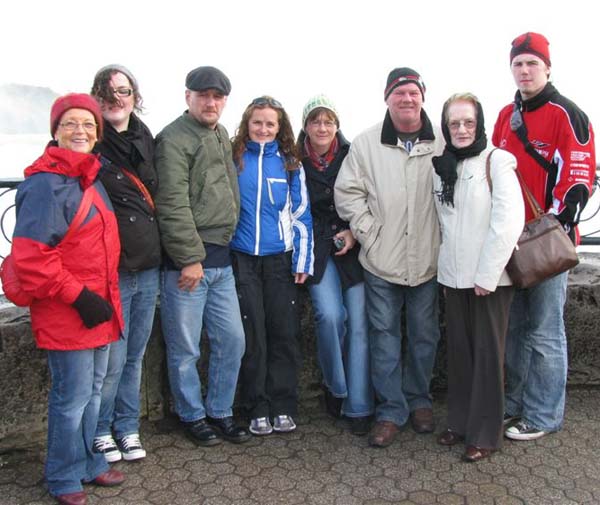 Home on Holidays from New York 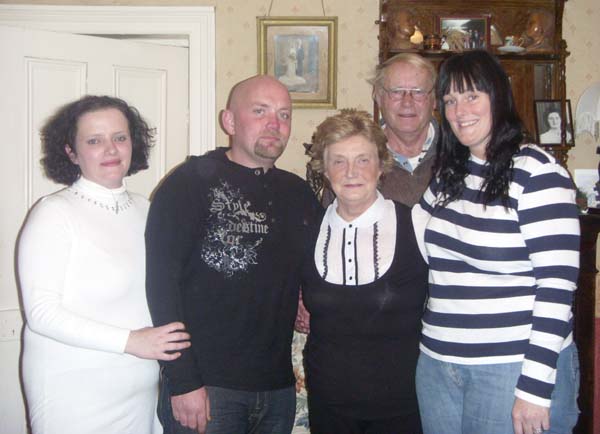 Pat and Mai Ryan Curraghgloss, playing host and hostess to Margaret Gleeson and her brother Mark and Mark’s wife Melissa. Margaret and Mark are formerly from Summerhill, Borrisoleigh and are now living in New York. This is Margarets and Marks first time in nine years being on holiday together at home in Borrisoleigh.

Building A Home for Jesus 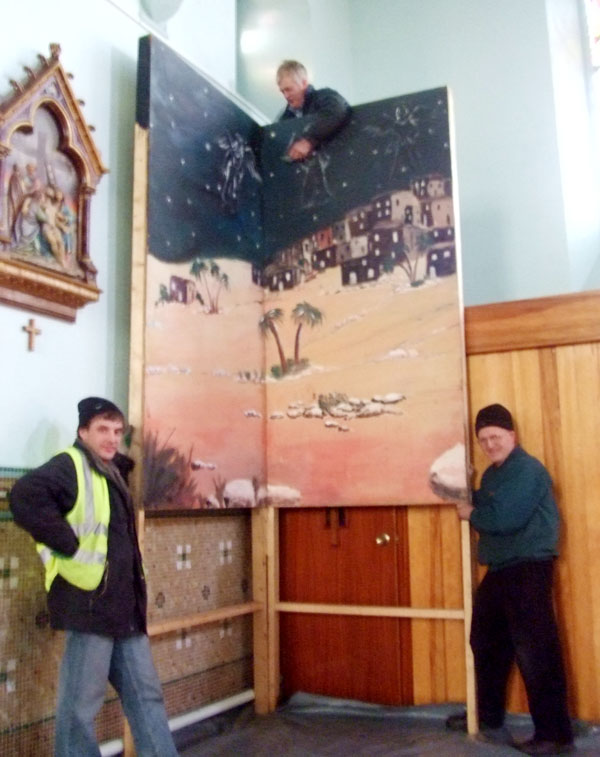 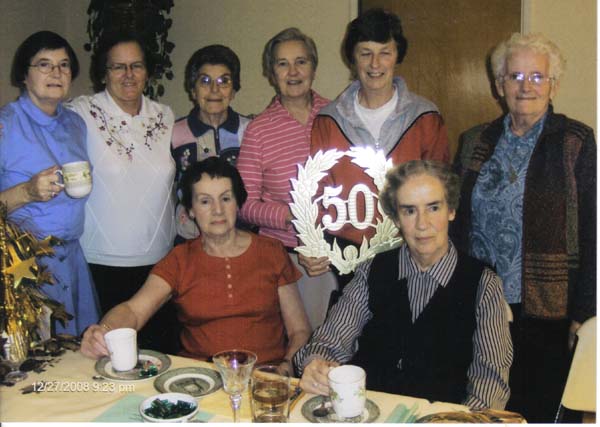 Noreen McGrath pictured here with her sister Sr. Maureen Skelly on the occasion of her Golden Jubilee. Noreen travelled to Los Angeles to celebrate Sr. Maureen’s Jubilee. Sr. Maureen belongs to the Presentation Sisters and is teaching in  Mont Clair. Also in the photograph are some of the sisters from Sr. Maureen’s congregation. 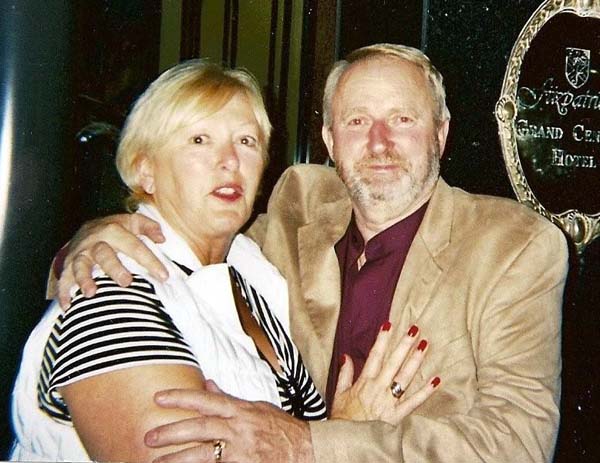 Mike and Fidelma Ryan of Borrisoleigh met up in New York while on holiday with old friend John Hayes, who left Ballinaclough, Silvermines in 1969.They have managed to stay in touch all these years!!!  John hopes to pay a visit at Christmas. 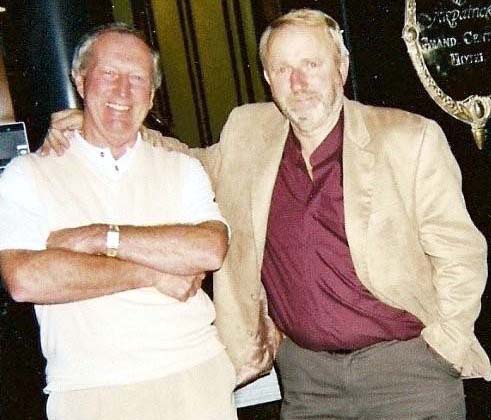 Mike and John Hayes in "The Big Apple" 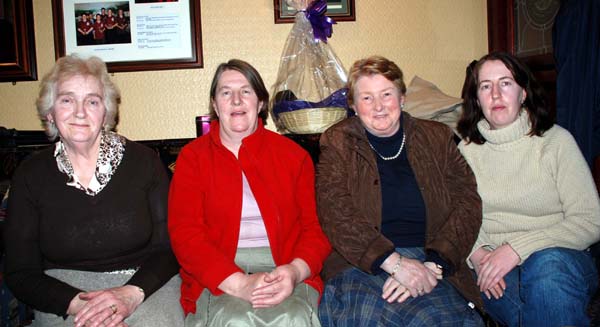 A table quiz was held in Stapleton’s Bar on Friday night last 28 November last in aid of the Parish Centre Project. The organisers of the event were very pleased with the turn-out and are very happy to announce that the total raised on the night was €1,340. Sincere thanks to all who supported the fundraiser event and the many others who worked on the night to sell tickets, provide refreshments and generally ensure the smooth running of the quiz.
A special word of thanks to Thomas Russell who set the questions and presented them in typical ‘Thomas Russell’ style and to his adjudicators Michael Ryan and Mary Kenny who kept a close eye on the results as they came in. Fr. Liam Everard PP expressed his gratitude to all concerned, thanking one and all for turning out in such large numbers on such a cold and frosty night. A great night was had by all. 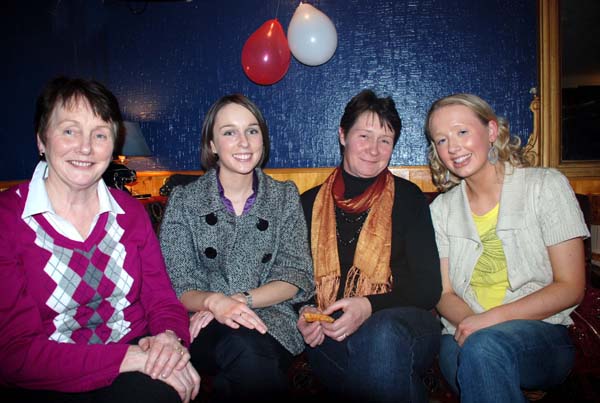 Mairead and Maura Bradshaw with Margaret Harty and Caroline Kenny 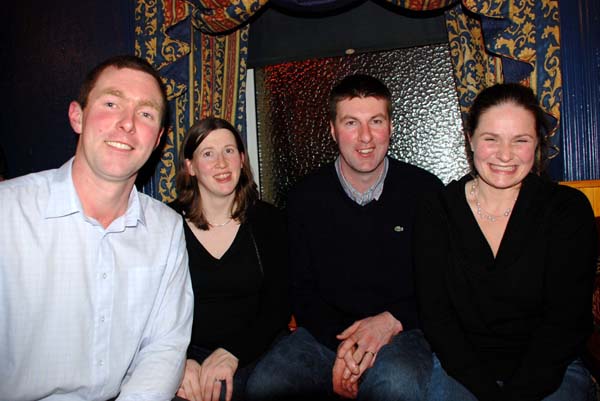 Paul and Maeve Slattery with John and Josephine Begley 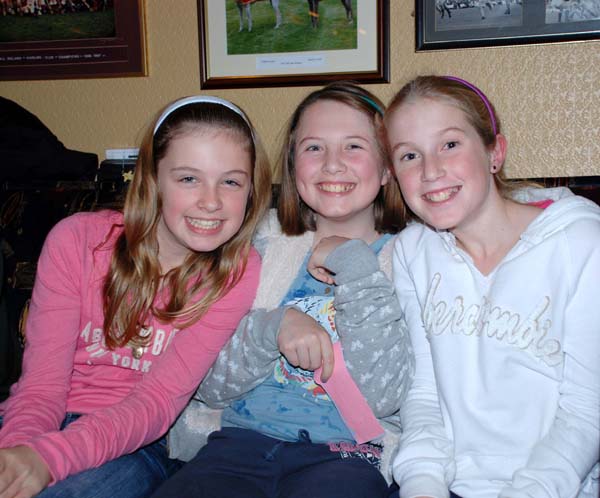 Sarah, Hazel and Tara enjoying the fun at the Table Quiz 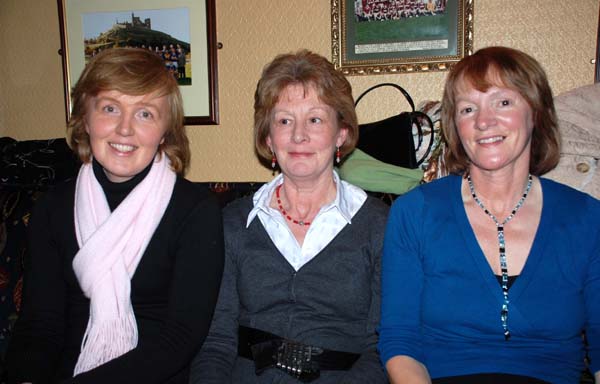 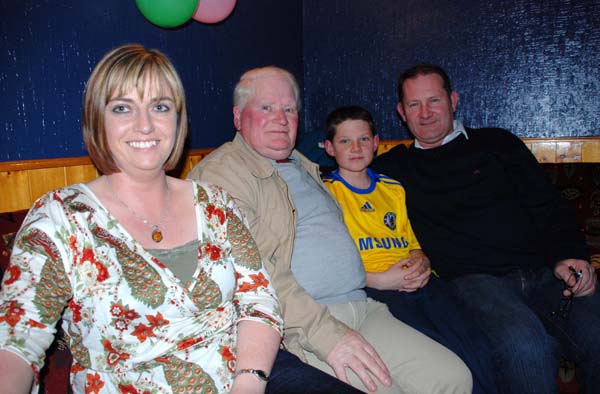 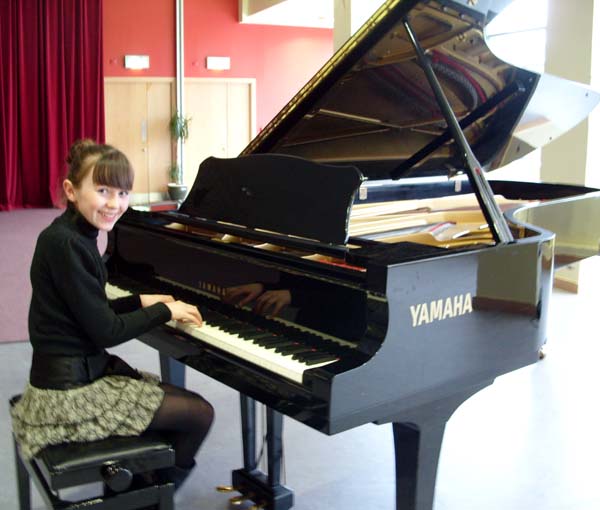 Eimear is pictured at the piano in Griffith College

Eimear Ryan of Ileigh was the recipient of an Excellence Award for Piano at the recent Prize Winning Ceremony at Griffith College, Dublin. These awards are presented on an annual basis by The Leinster School of Music and Drama to students who achieve excellence at their piano or speech and drama examinations. Eimear received her award for her performance of Ecossaise in G by Beethoven. She was among the twelve recipients for piano who were invited to perform at the awards ceremony in Griffith College Auditorium, the headquarters of the Leinster School of Music and Drama. Nine students received speech and drama awards at the ceremony. Well done, Eimear! 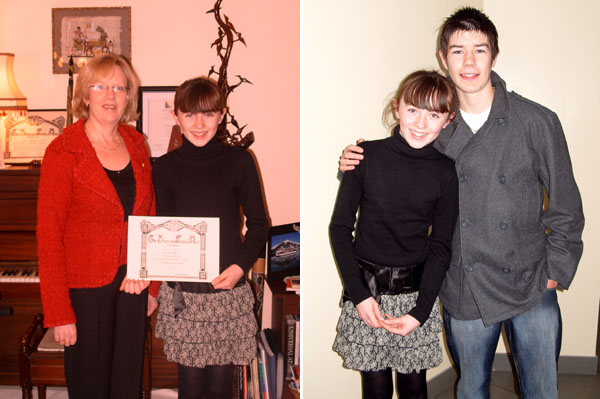 Eimear with her teacher, Mrs. Breda Kinane, Templederry and with Ryan Andrews of ‘The Clinic’ and ‘Fair City’ who received a speech and drama award at the ceremony 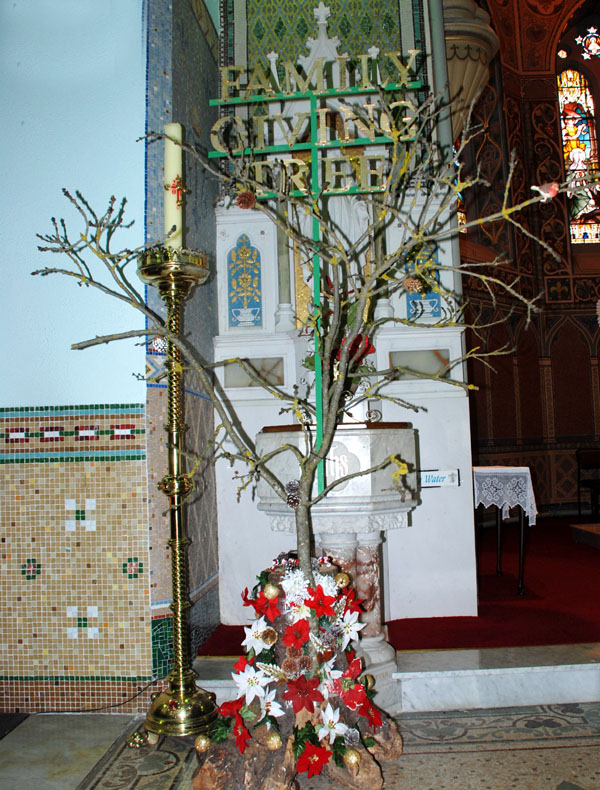 The Family giving Tree in The Sacred Heart Church, Borrisoleigh

Throughout Advent, Trócaire, the overseas development agency of the Irish Catholic Church, runs its annual Christmas gifts appeal, Global Gift. Trócaire offers a range of ethical Christmas gifts that people can purchase for friends and family, which the organisation distributes to poor and vulnerable families and communities in the developing world.

Trócaire’s Global Gifts reflect the true meaning of Christmas as they provide a meaningful alternative to conventional Christmas presents and remind us of the compassion Christ showed during his lifetime.

This year’s Trócaire Global Gifts include school lunches for Burmese refugee children (€10), olive trees for Palestinian farmers (€20), seeds and tools for African families (€35), goats for African families (€45), mother and baby care throughout the developing world (€60), support for grandparents caring for orphaned grandchildren (€80), the gift of food worldwide (€100), the gift of water for poor families around the globe (€150), land for poor Ugandan families (€200).

Global Gifts may be purchased locally from The Post Office, O’Connell’s Pharmacy, Stapleton’s of Main St., Coffey’s of Lower St., Bourkes’s Hardware, Bourkes’s of Chapel St. and Stapleton’s of Pallas Cross. You will receive a Global Gift Card to send to the person in whose name you purchased the gift, and also a ribbon representing your gift which can then be attached to the Family Giving Tree in the Sacred Heart Church in Borrisoleigh. 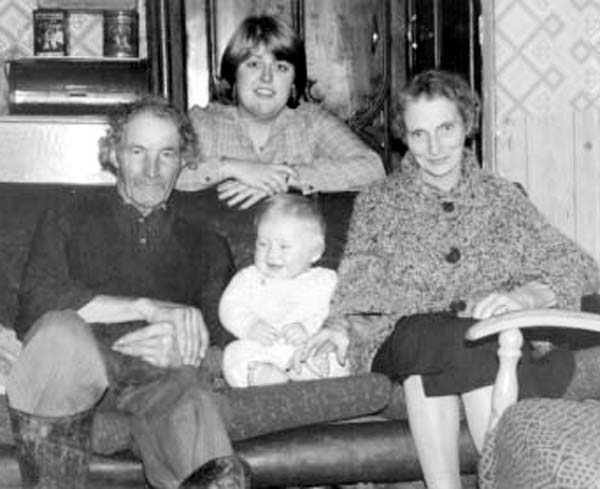 Spillane’s of Pallas.
At the back: Marie Smith and sitting: Stephen, John and Bridie