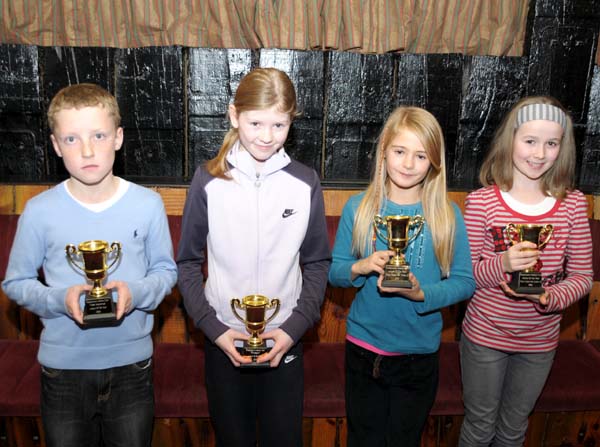 Martina Slattery from Cullohill, Borrisoleigh (aged 10) on far right, received an award for “Athlete of the Year” at a presentation ceremony held in Templemore recently. Also in the photo are Connor Sheedy, Templemore, Aoife Delargy, Drom and Paige Heape, Templemore. Well done Martina! 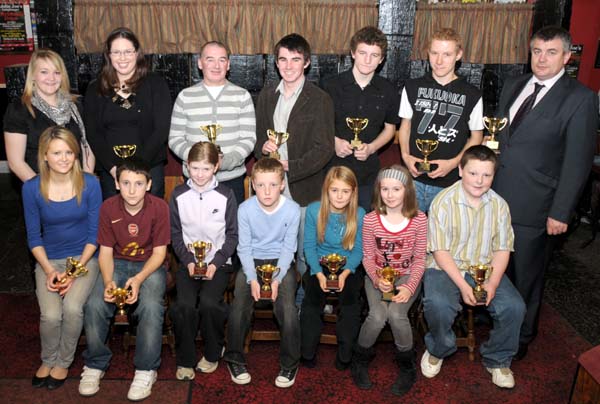 Members of Templemore Athletic Club who received awards at a function held in Eddie Joe’s in Templemore on Friday last 21st November.
Table Quiz in aid of the Parish Centre 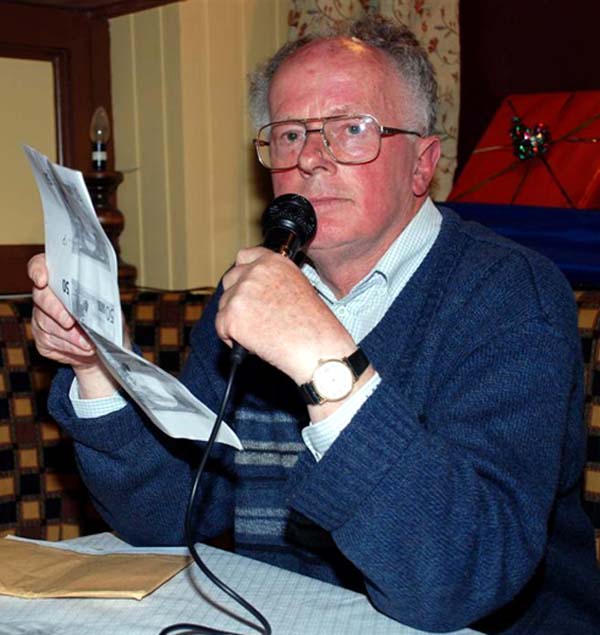 Draw in aid of the Parish Centre 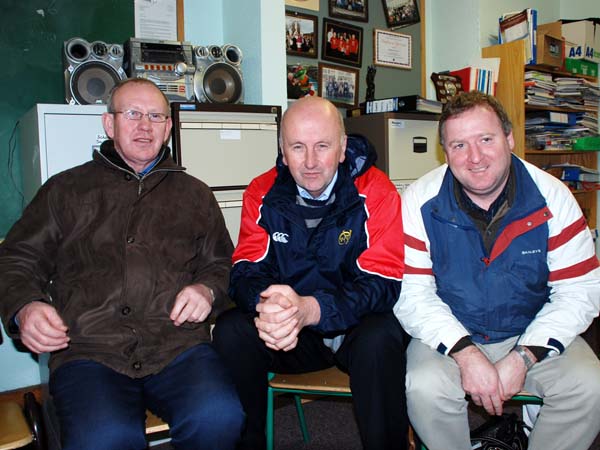 
A meeting was held in the Boys’ National School on Monday 24 November to organise the forthcoming Draw in aid of the Parish Centre Project. Tickets will be available in early December. Thanks to all the promotors who have agreed to get involved in making this project a success. If you would like to add your name to the list please contact Fr. Liam Everard PP (Chairperson of the Fundraising Committee). Your support would be greatly appreciated. More about the Draw in the coming weeks. 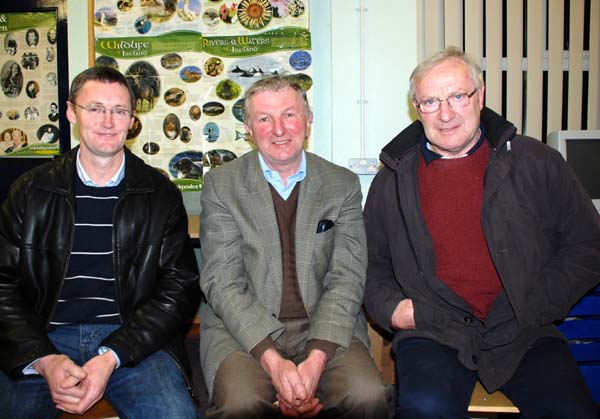 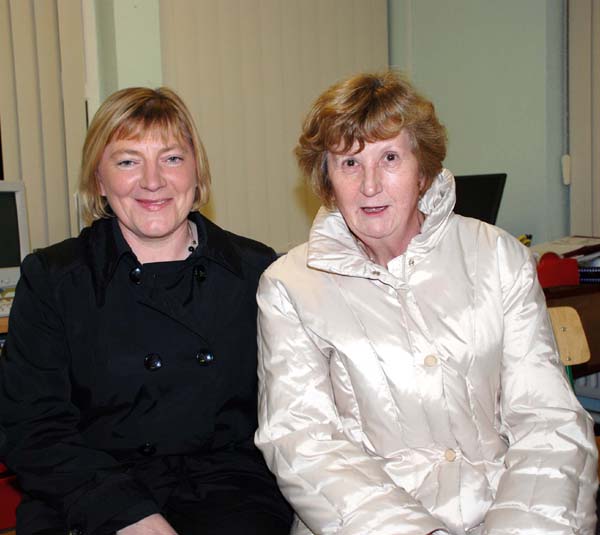 Annual AGM takes place in the Marian Hall on Sunday 7th December @ 5.30pm. All nominations / motions are to be with the Secretary no later than one week before. Membership and insurance for the coming year can be paid on the night.

Aaaaaah give us a hug!!! 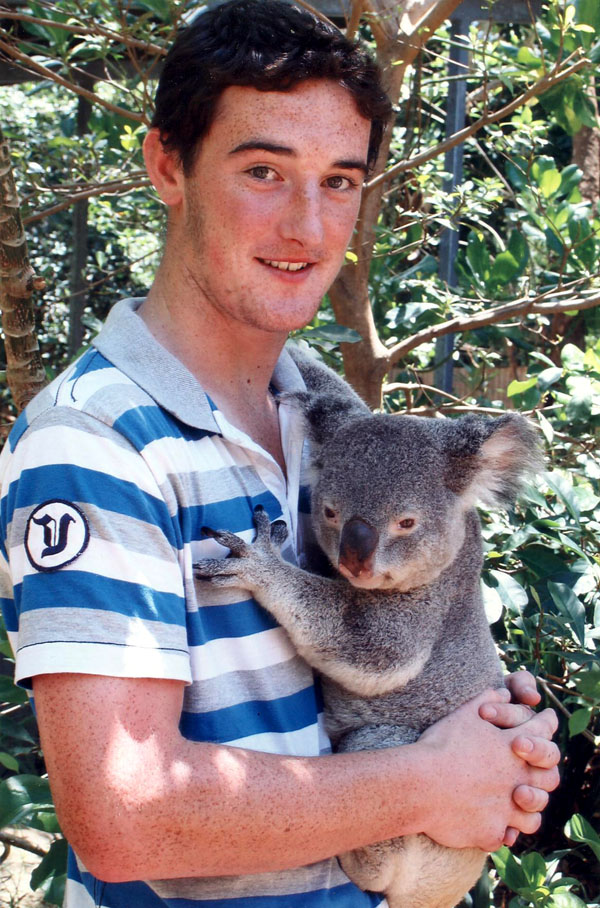 Martin Ryan with his latest ‘best friend’ down under

Martin Ryan of The Glebe who is currently down under in Aussieland is seen here with his latest ‘best friend’ a Koala bear at Bungalow Bay, Magnetic Island in Queensland. Martin is just one of many ‘Borrisoleans’ living, working or travelling in Australia. He was single when he left Borris but seems to be "attached" at the moment!  Young love eh!!! 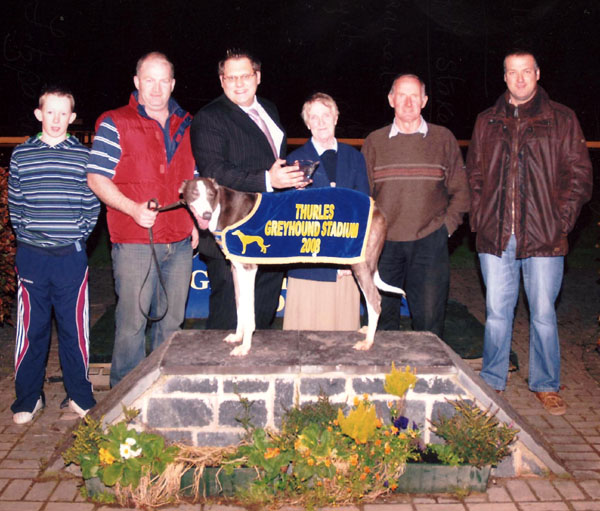 Heartiest congratulations are extended to the Younge Family of Curraleigh on the recent successes enjoyed by their exciting two year old Blue dog, Hilarious. Borrisoleigh has produced several top class dogs over the years, in track and coursing events, and great credit is due to Mrs Josie Younge who heads up the training team responsible for providing our most recent winning performances on the Track.

Recently, Hilarious won an A7 Stake in Thurles and on Saturday night November 22nd the dog tasted victory again in winning the O.M.C. Group A3525. The future seems very bright indeed for this very talented dog and Josie and her team are wished continued success in their future involvement in canine circles. 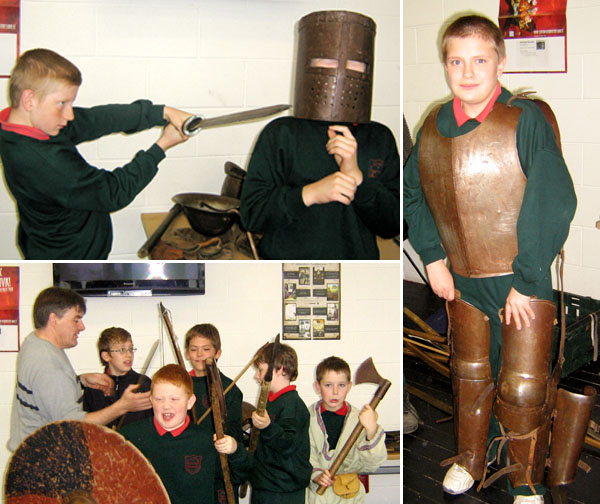 Borris Boys get a feel for the armour of the past at the Source Arts Centre recently!
Fifth and Sixth Classes from St. Patrick’s Boys’ National School had a most enjoyable ‘Living History’ session in the Source Arts Centre recently. Norman times were brought to life in a most exciting way by historian Michael Moylan as the boys explored the armour and weapons which were used by our ancestors. All agreed that the trip improved their understanding and appreciation of this important chapter in our past.

A local committee is organising a fundraising event called “Swingers & Singers” on Sunday December 28th in the Clodagh Bar in aid of Conquer Cancer. In order to raise as much money as possible they have decided to host a fun-filled version of “You’ve got Talent”. It would be fantastic if local clubs, groups, organisations and businesses could enter an act e.g. singer, dancer, comic or group. All the organisers ask is that each act makes a generous donation to the cause.

It may interest you to know…

It is estimated that 21,500 people living in Ireland developed cancer last year. The Irish Cancer Society is dedicated to eliminating cancer as a major health problem and to improving the lives of those living with cancer. The Society receives no funding from the government and relies on voluntary contributions from the public. We appreciate greatly the enthusiasm with which people such as yourselves and your community rally to the cause. All funds raised from this event will go towards funding our on-going programmes such as patient care, research and education.

The Borris Wave (As opposed to the Mexican Wave!) 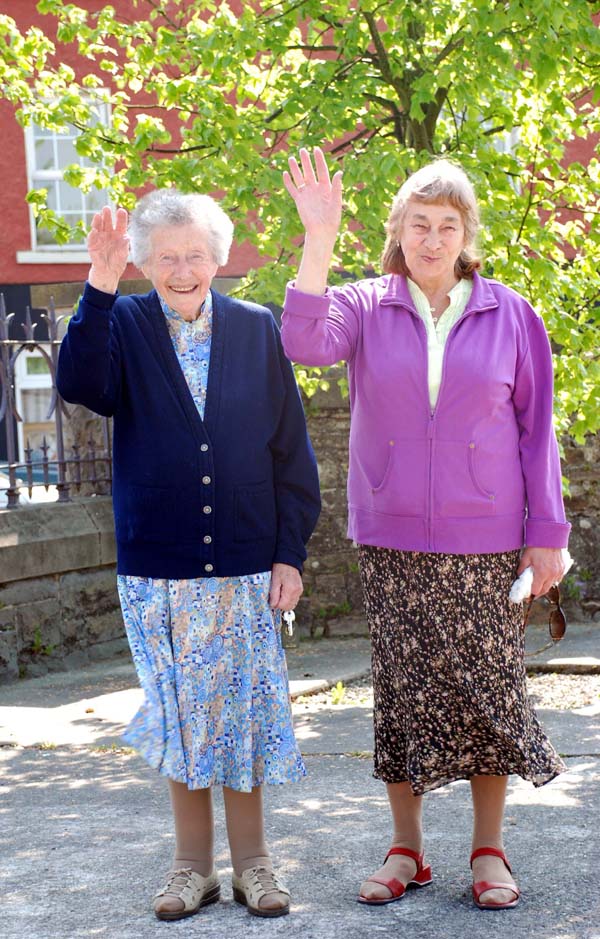 Mai Maher and Helen Maher demonstrate the ‘Borris Wave’ after 10.30 a.m. Mass in the Sacred Heart Church during sunnier days earlier this year (yes we had one or two!!!)
May They Rest in Peace

Those who died in our parish during the past twelve months 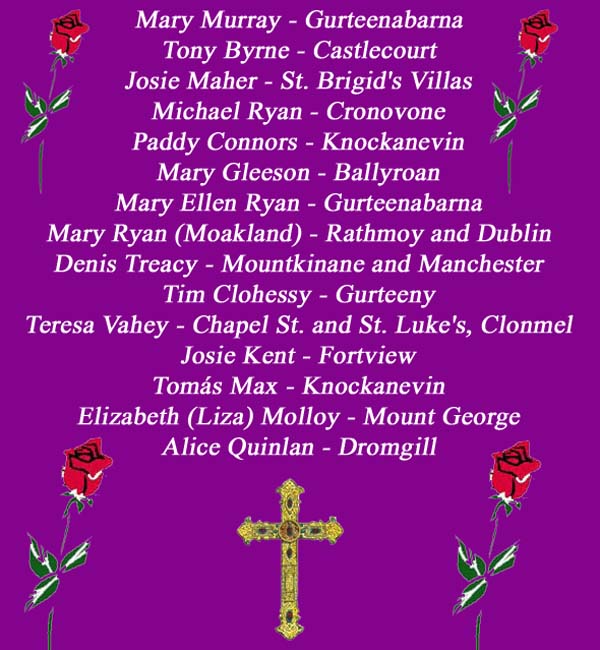 A special Mass was celebrated in the Sacred Heart Church on Friday evening last to remember those who died in our parish during the past year. November is a special time for remembering our dead and praying for the eternal repose of their souls. Those listed above and all on our Altar List of the Dead were prayed for during this Mass. Family members then carried a special candle to the Altar in remembrance of their loved one who died during the year. The Rosary has also been prayed in the various cemeteries in the Parish during the Sundays of November. 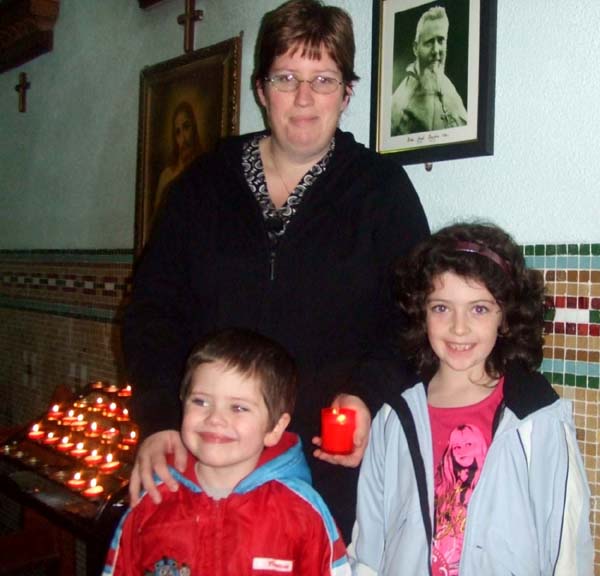 Fiona Max with her son Seán and daughter Aoife, holding the candle which Aoife carried to the Altar during the special Mass for those who died during the year. The Candle was in remembrance of Tomás who died suddenly on 23 September last. 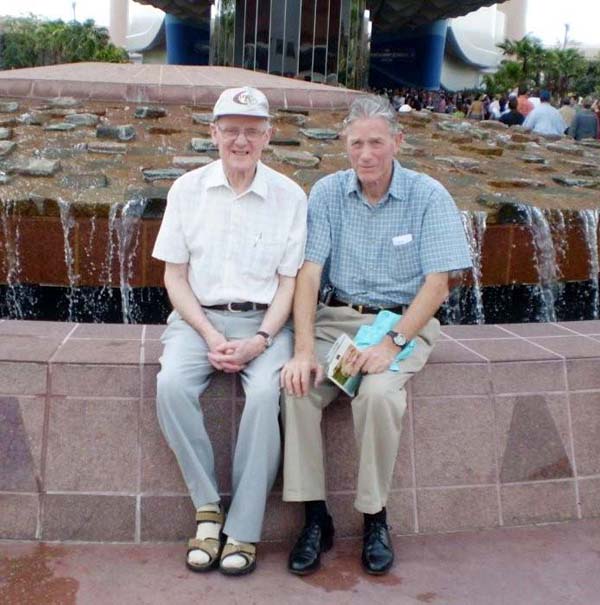 Austin Kearney is pictured here with his brother-in-law Daniel Tierney during a visit to Orlando, Florida earlier this year
Tom calls Time! 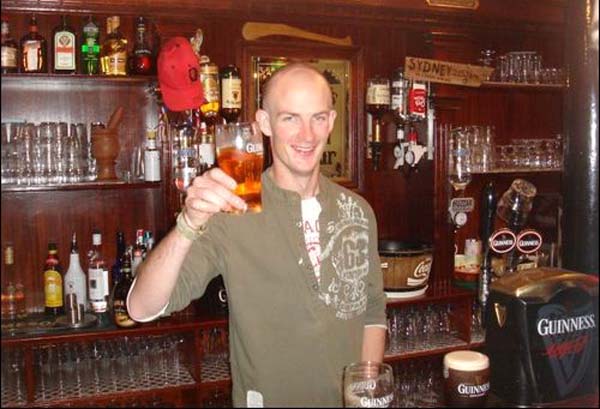 Tom Young, proprietor of Finn’s Bar, closed up shop on Saturday night last 22 November.
‘Big Tom doesn’t play here anymore’
The most recent proprietor of Finn’s Pub, Thomas Young called ‘time please’ for the last time on Sat night Nov 22nd. Following 3 very successful years trading in the entertainment heart of Borrisoleigh, Thomas has decided to move on to pastures new. In the New Year D.V. Thomas is heading for Ghana where he will undertake charitable work to assist the less well off in this African nation, as they struggle to develop and prosper. His many friends and the various organisations of which he was a valued member wish Tom every success and blessing in his new and exciting venture. 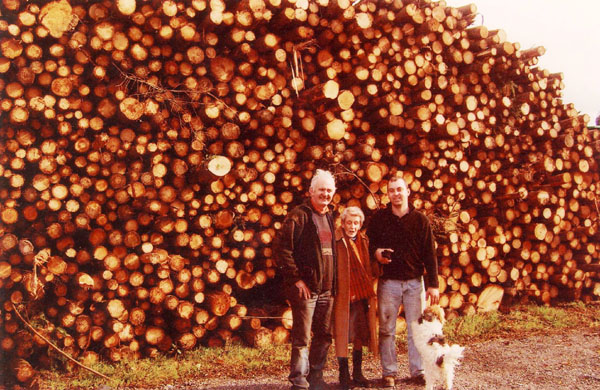 Eileen Ryan with Mick Fahy and Mick Hyland (Timber Contractors) and Ruff who had his own ‘bark’ about the trees
The line above is the first line from the famous poem ‘Cill Cais’ and it translates as ‘what will we do in future without timber’. This heading came to the mind of the writer as his attention was drawn to vast heaps of timber piled by the wayside awaiting collection for transport to various destinations.
In the recent past 800 tonnes of timber was felled and prepared on the lands of Bobby Ryan in Rathcarden. This plantation replaced trees that had been last cut down in 1968. Prior to the sowing of that earlier plantation an accidental fire had destroyed trees that had originally been sown early in the 20th century. The loss of this timber was the cause of the great sorrow and regret to Bobby’s and Eileen’s ancestors. These 3 great plantations were sited on the Faill (pronounced File) leading down to the banks of the Clodagh river and Eileen Ryan was proud to be photographed with the freshly cut trees and the timber Contractors prior to the removal of this latest wood produce. The area of course will again be resown and it will fall to the next generation to oversee the new growth and eventually to carry out the felling and removal of the finished product. 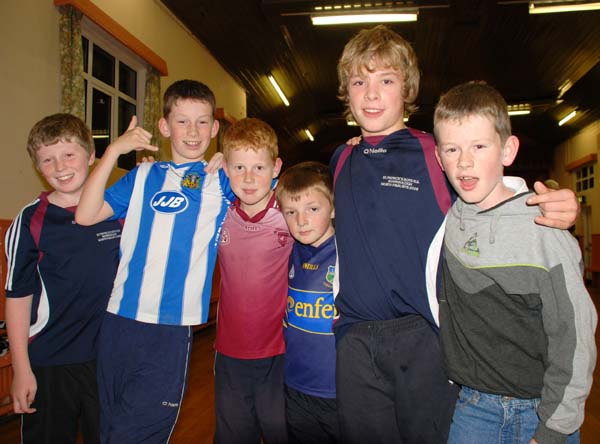 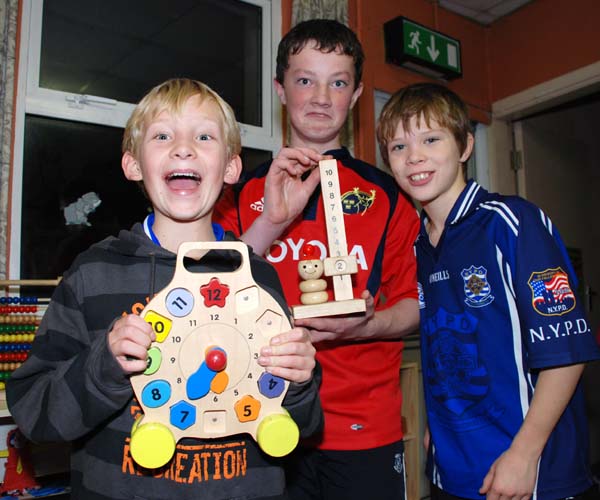 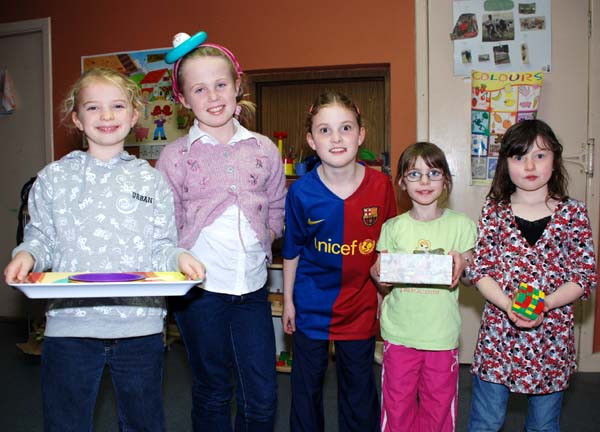 Friends havin’ fun and frolics on a Friday
Go on the Borris Girls!!! – a blast from the past 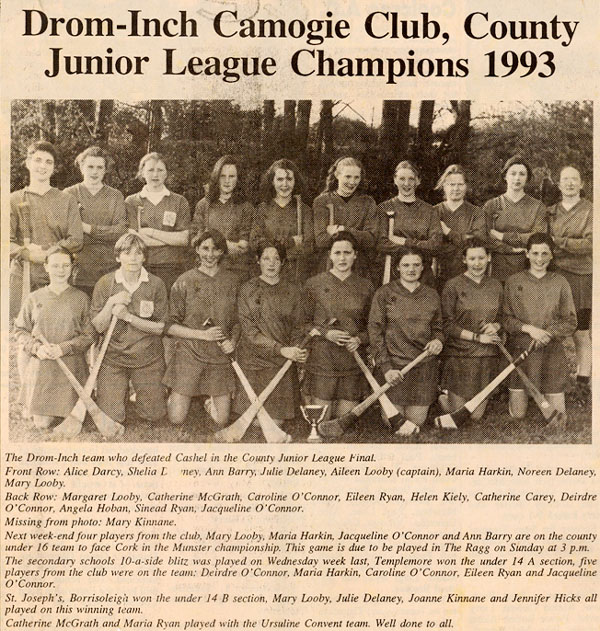 Angela O’Sullivan (Hoban) sent us this paper cutting from years past to remind us of the Borris Women who played for Drom- Inch Camogie Club back in the early 90s!
Clodagh Macra News

Teresa Kennedy with her friend Maria at the Queen of the land in Tullamore, and Denise Ryan, winner of North Tipperary Impromptu Speaking Competition

On Saturday 15th November many of Clodagh Macra’s members went to the Queen of the Land Competition in Tullamore, County Offaly. We went in support of the North Tipp Queen – Stephie Scully from Devils Bit Macra Club. A great night was had by all. Then on Friday 21st November the North Tipp round of Public Speaking and Impromptu Speaking was held in Dolla. We are proud to say that Clodagh came away with the two titles on the night. Our public speaking team included: Teresa Kennedy, Denise Ryan and Laura Ryan, with Denise Ryan also winning the Impromptu Speaking category. Well done to those involved. 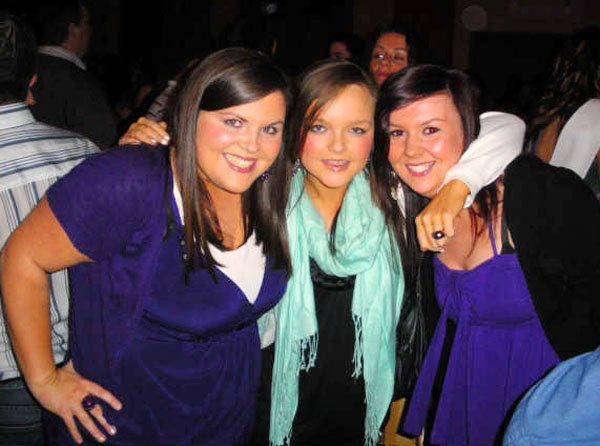 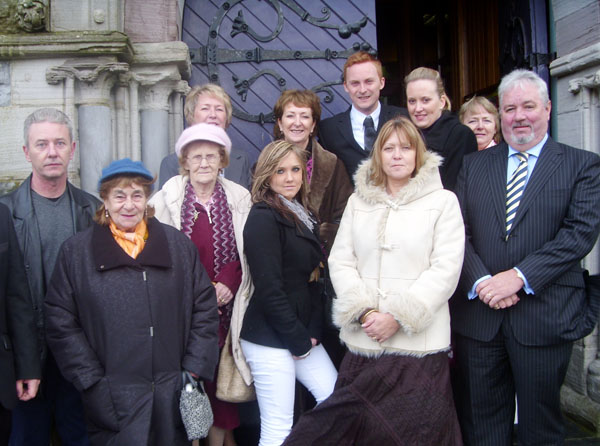 Mary Lennon with her family attending the anniversary Mass of Joe Lennon. This photo was taken outside The Sacred Heart Church, Borrisoleigh, on Sunday last 23 November
Marian Hall Lotto 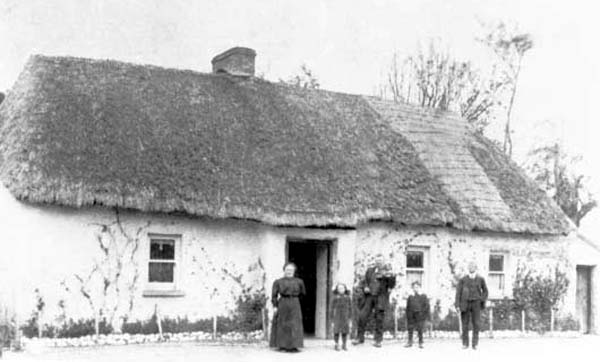