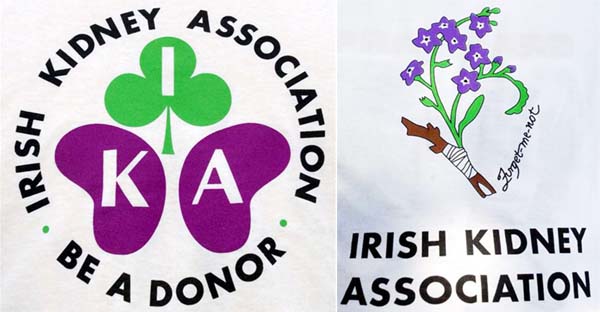 The Annual Charity Cycle took place last Saturday September 6th. This year’s cycle was in aid of the Renal Support Centre, Irish Kidney Association in Beaumont Hospital. The Square was buzzing with activity shortly after 2 o’clock as the cyclists gathered along  with many well wishers who were eager to see them on their way. Despite the inclement weather of the previous day, the sun shone and the rain took a welcome break. Almost 50 cyclists set out for Thurles, taking a break at Eurospar on the Templemore Road. Next stop was Eddie Joes in Templemore. The pressure was mounting and the wind was increasing. After some light refreshments we were homeward bound and arrived back in Borris safe and sound. Many thanks to the cyclists, the sponsors and all those who helped in any way to make the day such a success. Any outstanding cards and monies can be returned to Ruaírí O’Connell or PJ Delaney.
Ready for off!!! 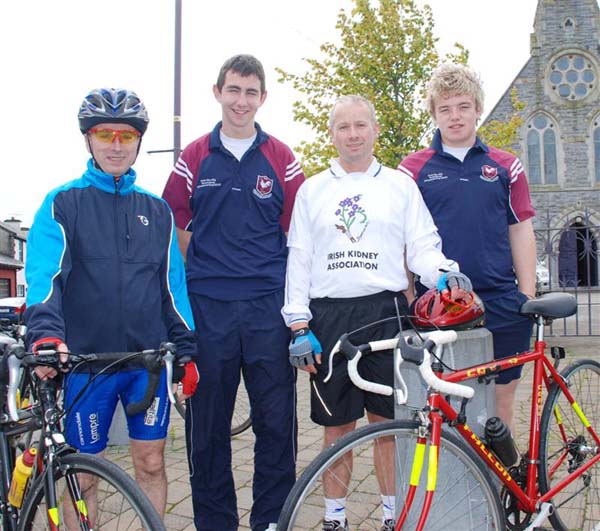 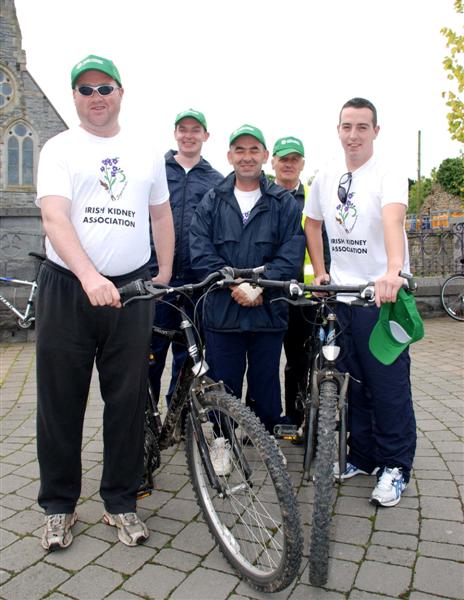 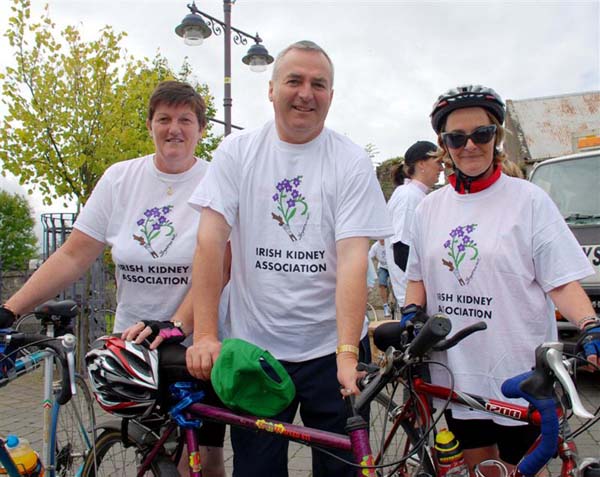 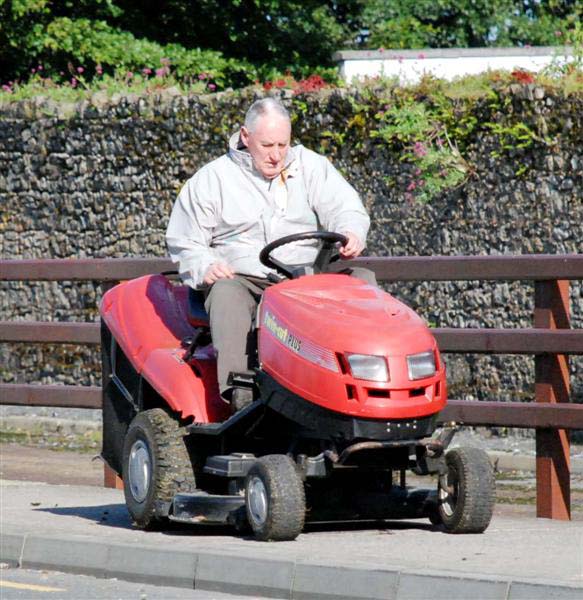 John McGrath under pressure as the cyclists pass him by ….. It’s not even self-propelled !!!

Check our the Photo Gallery for more photographs http://www.borrisoleigh.ie/photo.php 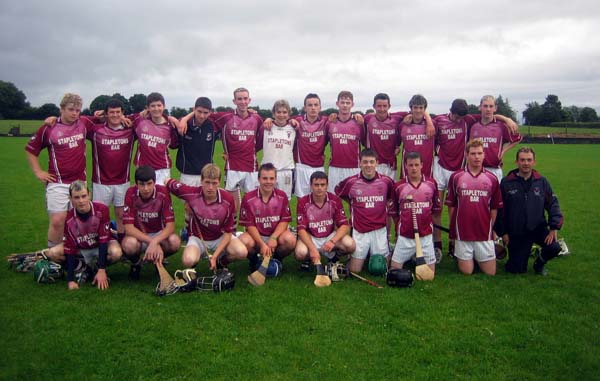 Borris-Ileigh Minor A Hurling Team played Nenagh Éire-Óg in the North semi-final on Monday 8th September in Dolla. After a fantastic performance they lost by a mere 2 point margin leaving the score at 2-13 to 2-11. It was a great spirited performance by all the players and great credit is due to the team management on having their players so well prepared for this match even though the final score was not in our favour.  Well done and commiserations to all concerned.

Borris-Ileigh Junior B Hurling Team
The team played Knockshegowna on Wednesday evening last in Borris, under lights, in a preliminary North quarter-final and won comfortably after a vintage performance in typical Borris’ style. This win was as much about honesty and spirit as it was about fine skills, both in defence and attack. This is one of two of the last teams standing for the club this year and they deserve everybody’s full support in the North quarter-final this Saturday afternoon at 4:00 p.m. in Toomevara when they play Templederry.
All-Ireland Senior Hurling 7s 2008
A team travelled from Borrisoleigh to Dublin this weekend for the All-Ireland 7-a-side hurling tournament in Stillorgan. The team was drawn in a group with Kilmacud Crokes (the hosts), Mullagh (Galway) and O Donovan Rossa (Belfast). 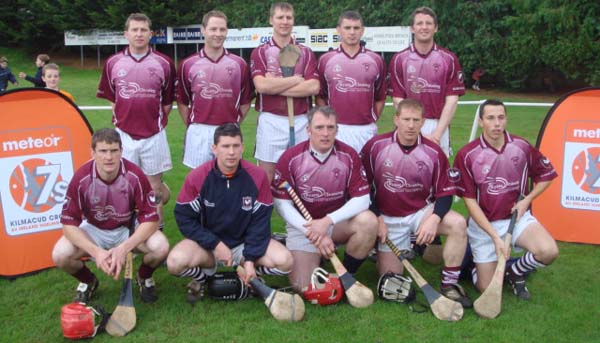 Front L – R – Mark Bourke, Declan Maher (goalie), Philip Rabbitte, Sean Maher and Paul Maher
Playing all of our games in Silverpark (around the corner from Stillorgan and Leopardstown), the team were very impressive in disposing of the hosts and the Northerners but had it all to do to beat a tough Mullagh side, only grasping victory with a fortuitous goal by Philip Rabbitte. This meant that we topped the group and so set up an intriguing quarter-final spot with fellow North Tipp side Portroe, who came through a tough group and an even tougher play-off against Bishopstown of Cork.

This game was played in the main field at Glenalbyn, Stillorgan and was a closely fought affair though we were eventually beaten by 6 points. Mark Bourke did hit the post twice in the dying minutes to be denied 2 goals and the Portroe goalkeeper, Darren Gleeson, gave an awesome exhibition of shot-stopping throughout the game. He actually finished up winning the Player of the Tournament award despite Portroe losing the final to Nenagh Éire Óg. The two beaten semi-finalists were Toomevara and Kilruane respectively, thereby making the semis and all-North Tipp affair. 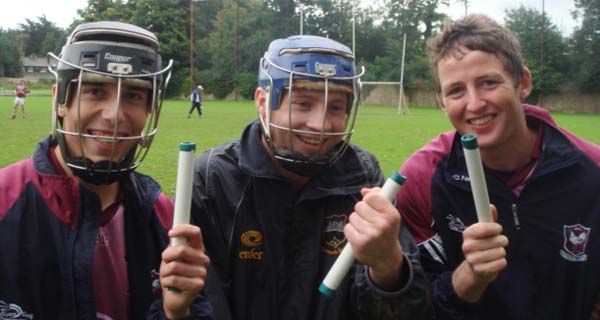 Paul Maher, Patrick Stapleton and Vinny Stapleton taking time out between matches
It was an enjoyable day out for all involved, including the many supporters who traveled up. The weather was poor early on but settled nicely by the hour, with the latter stages being played in dry, mild conditions. This was Nenagh’s 2nd victory in this event and it will be at least 2009 before Borris have a chance to add to their record 5 titles. 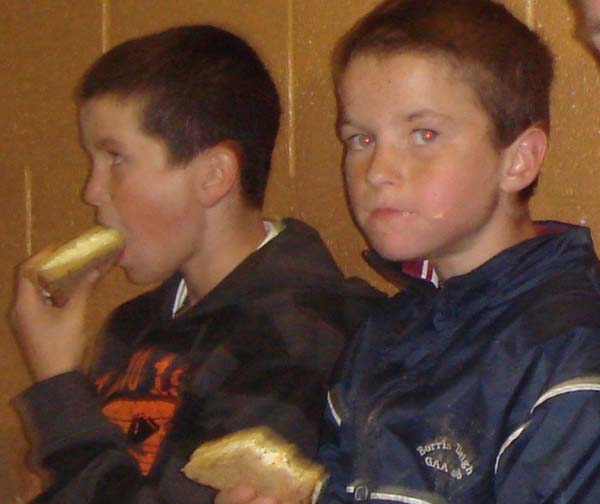 Kieran Maher and Jack Hogan enjoying a bit of food after the days matches
Check our the Photo Gallery for more photographs http://www.borrisoleigh.ie/photo.php 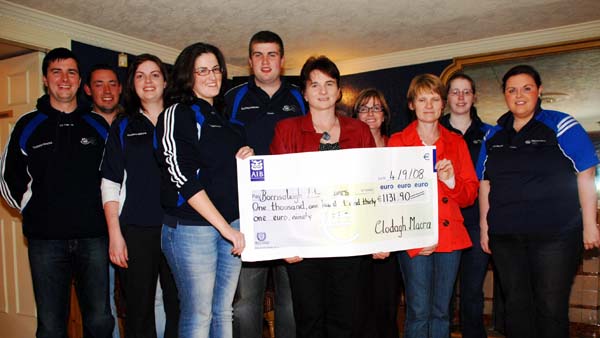 Some Macra na Feirme Club members presenting the cheque for €1131.90 to Christine O’Dwyer and Paula Ryan
Back in July, the local Clodagh Macra na Feirme Club generously lent their support to the defibrillator fundraising Family Fun Day by organising a sponsored bale push from the Square in Borrisoleigh down to the Town Park. Following a fantastic fundraising effort the Macra group recently presented a cheque for €1131.90 to the Borrisoleigh Life Savers Action Group. This amount will greatly assist the group to reach the target required for the purchase of defibrillators for the community. The defibrillator group would like to sincerely thank the Macra Club for their effort and support.
Back Home in Borris 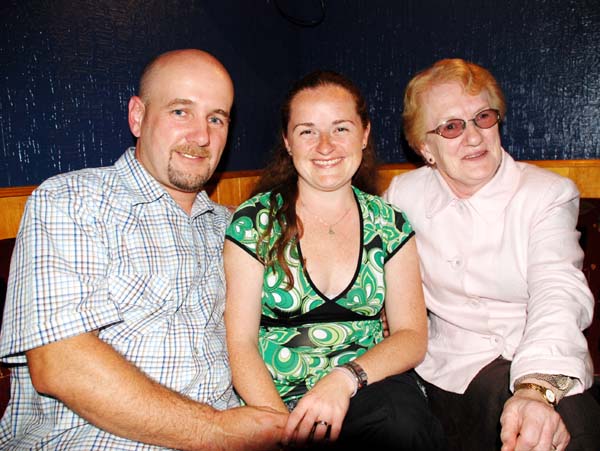 Bridie Shanahan from Knockbrack with her son Aidan and his fiancée Angela Mullaney from Toronto enjoying a night out at the Comhaltas Session in Stapleton’s on Thursday Sept. 4th. Aidan and Angela are to be married in Toronto on October 4th next. We wish them the very best of luck for their future. 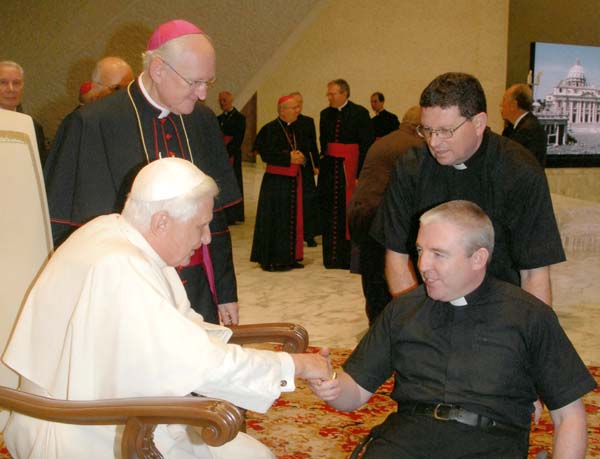 Fr. Michael Barry recently had the opportunity to meet with His Holiness Pope Benedict XVI while on holiday in Rome. Fr. Michael is pictured here with Pope Benedict and with his classmate from college Fr. Pat Deely of Toomevara. The meeting took place after the Pope’s general audience at the Vatican on Wednesday August 27th. The local curate is remaining tight-lipped about the content of their deliberations! 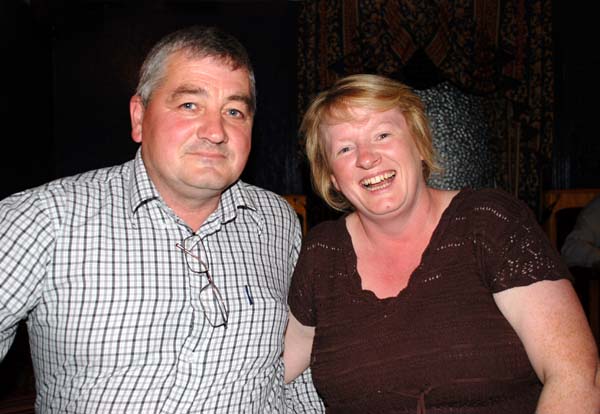 Pakie and Laura O’Brien enjoying a night out at the Comhaltas Session in Stapleton’s on Thursday night last Sept. 4th.

Paul Sheehan, Noelie Maher and Jimmy Slattery singing along to the Comhaltas Music in Stapleton’s on Sept. 4th 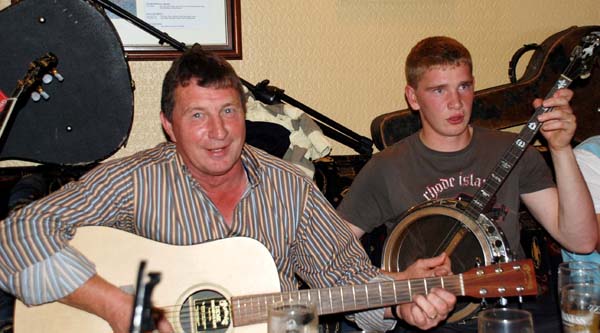 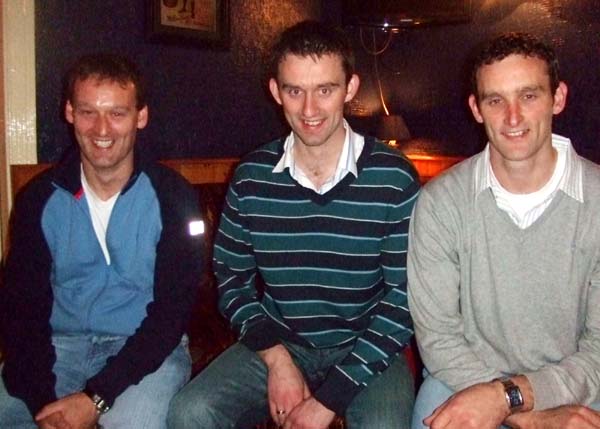 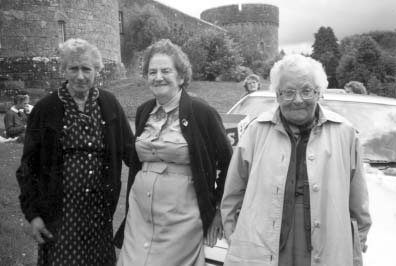