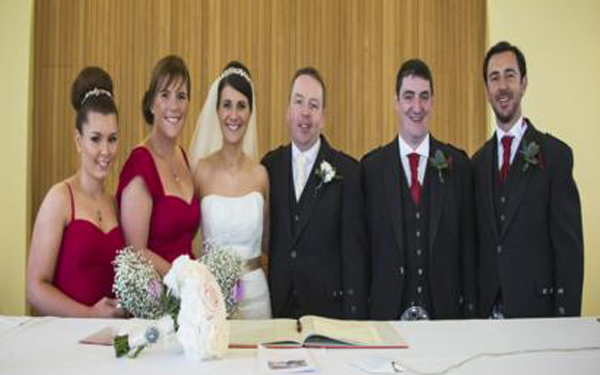 We congratulate Jennifer (nee Hill) and Sean Ryan (Mountkinane) who were married on Friday 10th of May last.
Their wedding took place in Largs, Scotland and their reception was held in the Lochside house hotel,
New Cumnock, Ayrshire, Scotland.

Their guests travelled from all over – Scotland, Ireland, England, Australia and South Africa.
It was truly a day to remember and Jenny and Sean thank everyone who were a part of their big day and all who sent them best wishes on the occasion of their wedding. 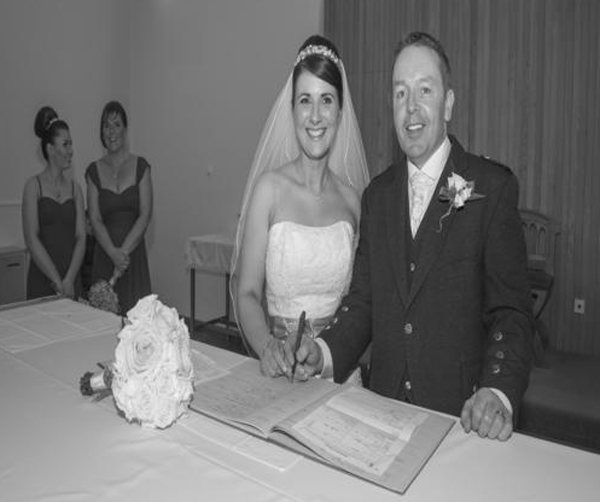 The signing of the register

The Ryans, Colliers and Quinns 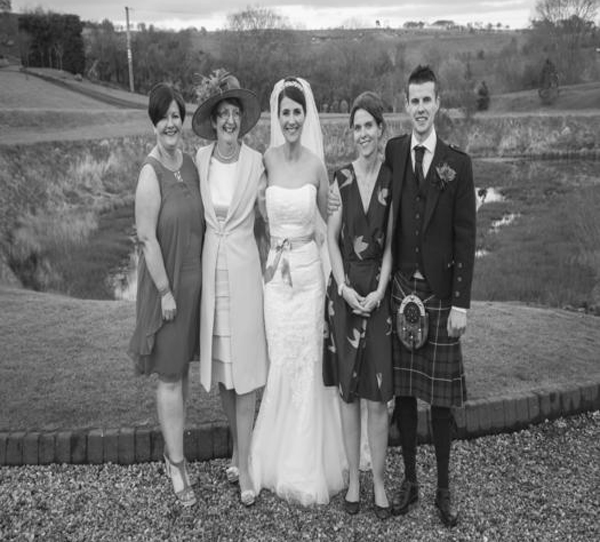 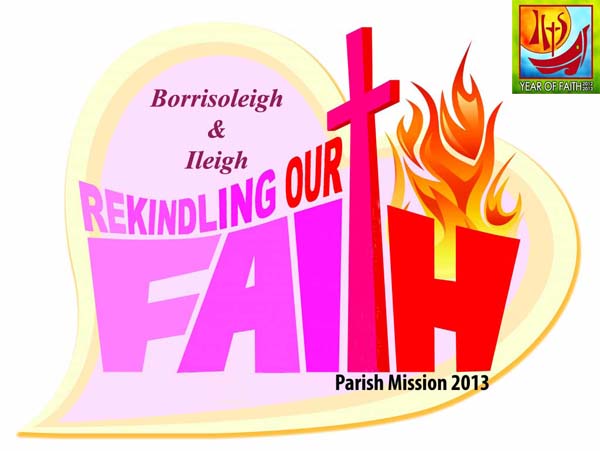 The Parish Renewal Team warmly invites you to a preparation meeting on Monday July 8th at 8pm in The Community Centre. This meeting is open to all who are interested in helping to prepare for and promote our parish mission later in the year.

Your attendance and contribution will help to make The Mission fruitful and meaningful for all our parishioners. We encourage you to please come along on Monday the 8th to meet with the parish team and members of the Redemptorist Community who will lead us in this celebration of our faith. 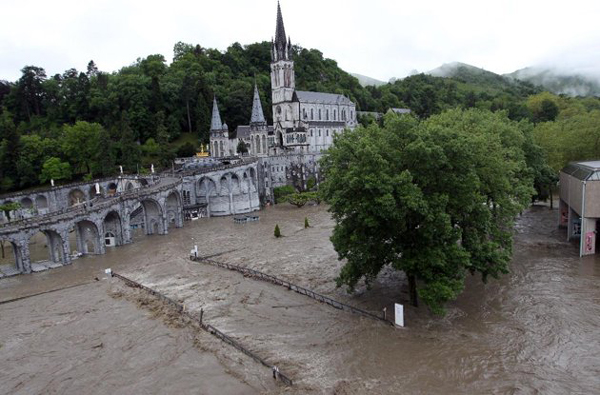 Lourdes like you’ve never seen it before
As the accompanying photographs clearly show, the Cashel and Emly Pilgrims certainly had an interesting pilgrimage to Lourdes this year. Over a dozen pilgrims from Borrisoleigh & Ileigh joined with the diocesan group of about 560 to go on pilgrimage to Our Lady’s Grotto to Lourdes (June 16th – 21st). None of them expected what transpired. As was widely reported in the media, the bursting of the banks of the river Gave which flows from the Pyrenees, through the city of Lourdes and very close to the Grotto itself. The flooding caused chaos and massive damage, not only in Lourdes but all along the banks of the river.

Flooding also occurred in Lourdes last October, causing the closing of the Grotto area for a time. The authorities reported that this year’s flooding was much worse and reached a height of 2 metres at its peak. Many local businesses were badly destroyed and will have to do all in their power to re-establish themselves after what was for them, a second lightning strike, if you’ll pardon the awful pun, in the space of nine months.

Despite the terrible flooding The Cashel and Emly Pilgrimage proceeded and there was a great sense of camaraderie as everyone did their best to make the most of the pilgrimage. The Pilgrimage Director Fr. Tom Hearne is to be complimented on the way that he and his support team handled the pilgrimage this year under what can only be described as challenging circumstances. Everyone, including the sick, the young, the elderly, the medical staff, the walking pilgrims and adult helpers were safe at all times and there was no cause for concern at any time despite the dreadful local conditions.

The common consensus was that, even though it was a very trying time this year, none-the-less, it was a very successful pilgrimage which had a different feel to it this year. Masses and ceremonies had to be rearranged in different ‘flood-free’ locations and decisions had to be made quickly and communicated clearly to the various different pilgrims in their different hotels and at the hospital. 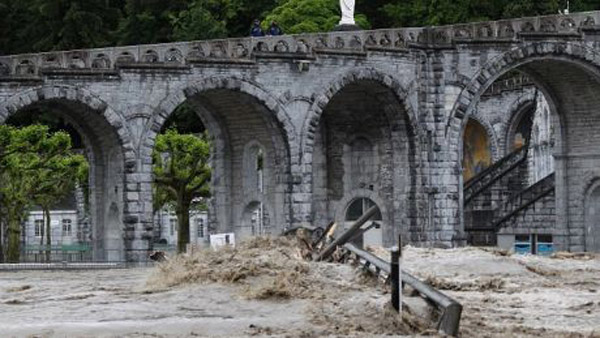 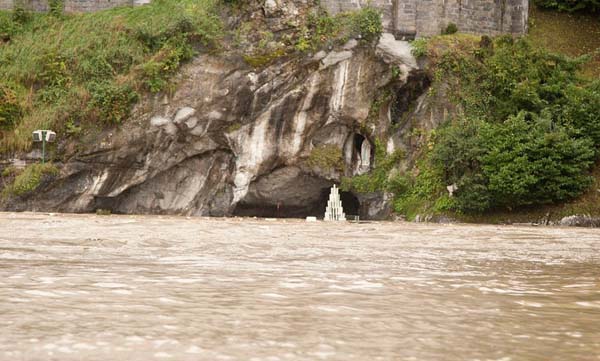 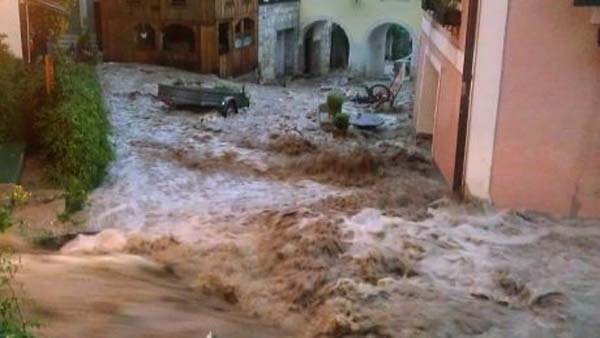 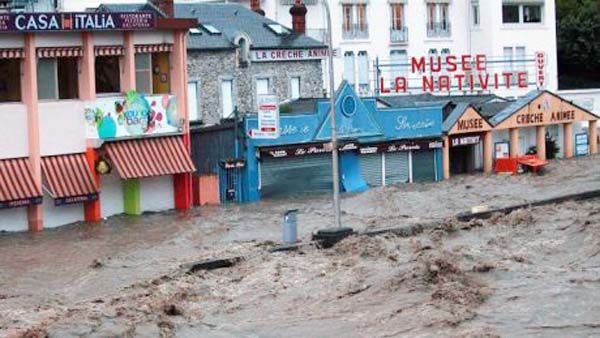 Businesses are completely destroyed in the flooding 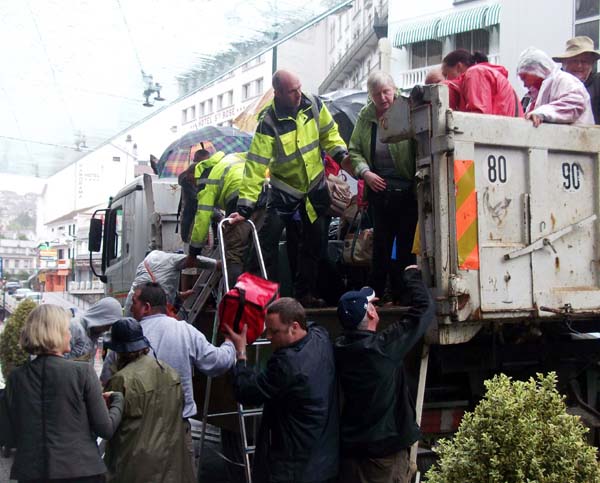 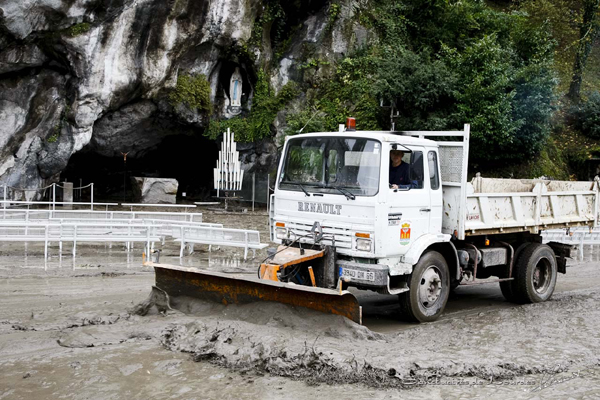 The clean up at The Grotto began in earnest 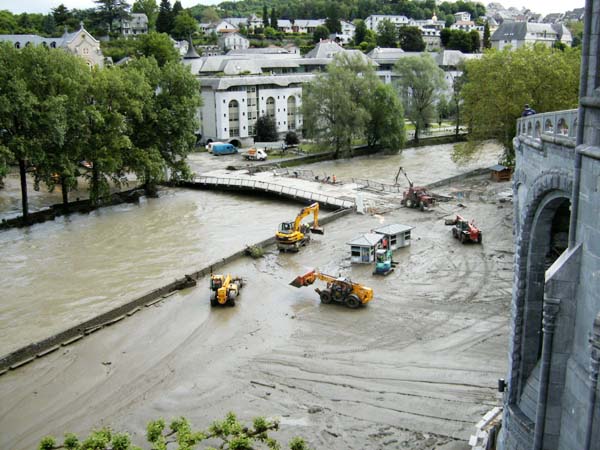 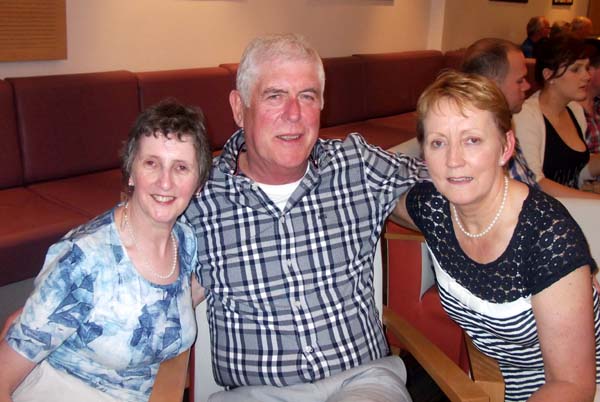 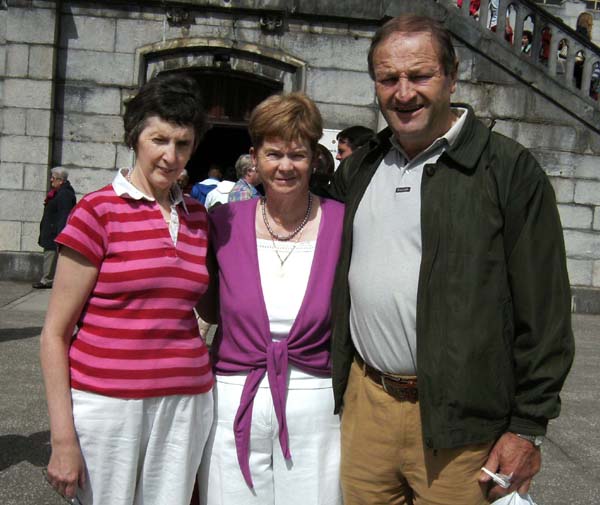 Tony with the Cashel & Emly Diocesan Candle which was blessed at the closing Mass of the pilgrimage to Lourdes
and which was placed near The Grotto after the flood damage was repaired – and Anne-Marie providing some musical entertainment for the pilgrims in her hotel. 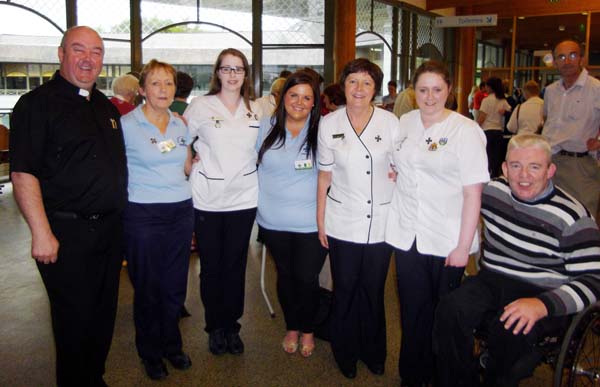 The Pilgrimage Director Fr Tom is able to smile at the conclusion of a ‘different’ but very successful
Pilgrimage to Lourdes with Anna, Gemma, Anne-Marie, Catherine, Brid and Fr Michael 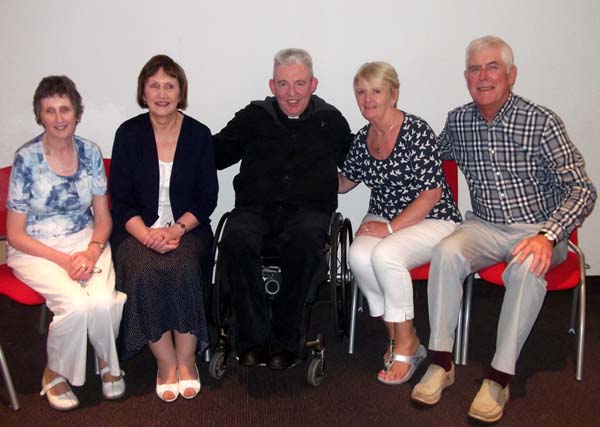 Gemma with Marie and Kathleen with Joan  "The Gathering" 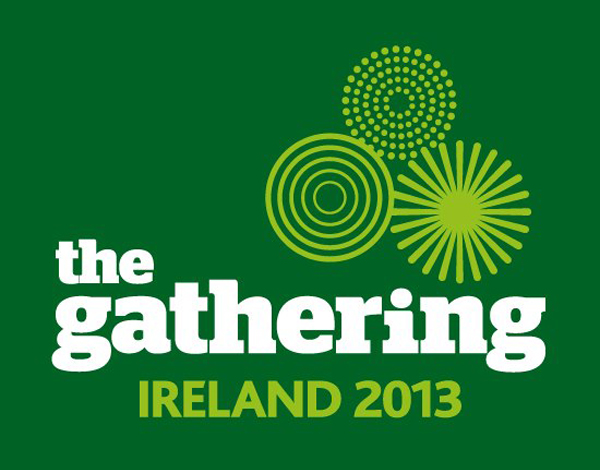 An open public meeting will be held in the Marian Hall on Monday the 8th July at 9 p.m.
with a view to organising a Gathering weekend over the October bank holiday weekend.
All interested people are invited to attend.

A representative or two from each club/organisation/group
in the community would also be appreciated.
Please come along and bring a friend. 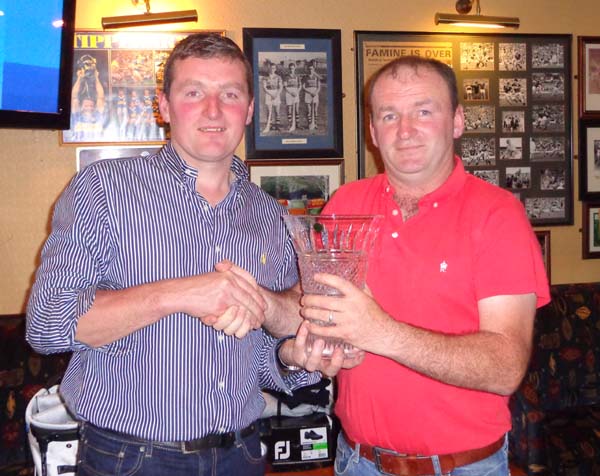 Our under 13’s had their first competitive league game on Monday the 1st July, in Roscrea against St. Cronan’s  at 7.15 pm. They got their league campaign off to a great start with a win, the final score was Roscrea 1-1, Borrisoleigh 2-0.  Well done to the girls and their mentors.  Their remaining fixtures are Monday the 8th July at home against Templemore, Monday the 15th Bye, Monday 22nd July away against Lorrha and Monday the 29th July at home against Kildangan.  All matches to commence at 7.15 pm, we are in group 4, the winners and runners up of the group will play either the runners up of group 2 or the winners of group 2 on  Wednesday the 7th August, then winners will progress to semi- final on 14th August with winners going to final on the 21st August.  Parents/guardians will be texted if there are any changes to the above fixtures.

Our minor panel continue to train. They had their first challenge match on Monday evening against Toomevara in Toomevara where they got on very well; this was the first minor team to play for Borris-Ileigh since the club reformed in 2007. They also competed in a minor blitz in Toomevara on Saturday the 29th June.  We would like to thank Toomevara Camogie club for the invitation and their hospitality on the day the refreshments went done very well, the panel got some much appreciated experience. Their first competitive match will be against Shannon Rovers on the 9th July at 7.15 pm in Borrisokane.  The remaining fixtures have been amended and are now as follows; 23rd July at home against Ballingarry, 30th July at home against Gortnahoe, 13th Aug away against Moycarkey and 20th Aug at home against Portroe. We are in group 1, the winners and runners up of this group will play the runners up or winners of group 2 in the semi-finals dates to be confirmed later.

Intermediate Team
Training continues they had a challenge match against Tullamore on Sunday the 30th June in the park.  They put on a fine display winning with a final score line of Borris-Ileigh 1-13 to Tullamore 1-3.   Thanks to Tullamore for travelling the distance again it is great to get some challenges in before the championship commences.
Administration

Church gate collection will take place on the weekend of the 20th & 21st July. Camogie club merchandise now available Hoodies, tracksuits, t-shirts, jerseys and raincoats available. See Advertising Section of www.borrisoleigh.ie for pictures.  If interested please contact Caroline at 086 1522716. You can also follow us on Facebook. 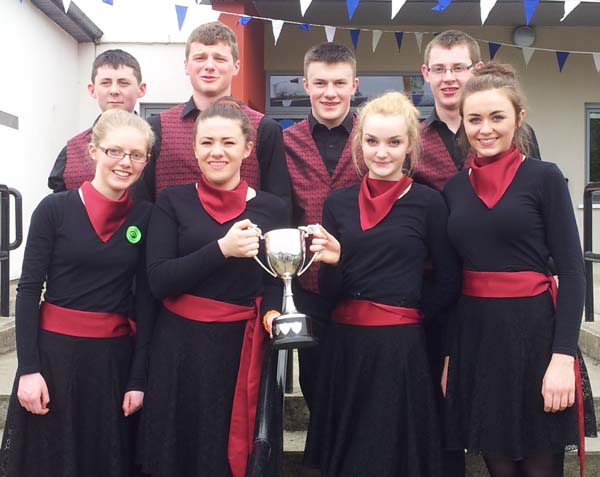 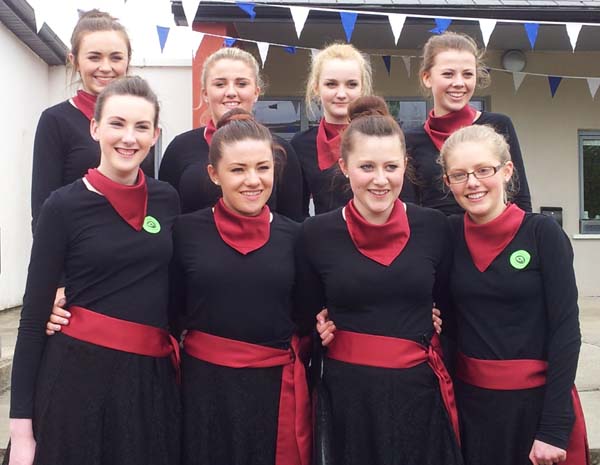 The All-Girls Set came runners-up in the County Fleadh

The sets recently took part in the County Fleadh in Killaloe and in the Fleadh Nua in Ennis. The mixed set came first in the Co. Fleadh the all girls set came second in the Co. Fleadh. They both go forward to the Munster Fleadh this month in U.L. in Limerick. Best of Luck to both sets….
Also Fleadh Nua is a National event held every year in Ennis both sets took part for the first time this year and they did very well. Well done to all concerned.
Pic of the Past… down memory lane 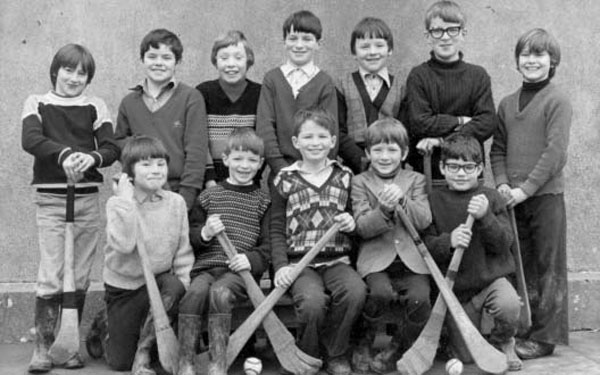