10 Oct 2012
Borris-Ileigh Juvenile GAA Club
U14: Pride of place this week goes to our U14 hurlers who defeated Burgess in the North U14B plate final on a scoreline of 1-08 to 0-03 in Borrisoleigh on Thursday evening last. The plate was presented to the Borris Ileigh Captain David McCormack by the North Board Vice Chairman David Moran. Well done to all the players who showed great determination and spirit throughout the championship and plate competitions this year. Thanks also to Denis Kelly and Christy Reid selectors who put in a lot of time and effort with this panel during the year and ensured that they were well prepared for the final.
U11 We participated in the Harrington Cup in Templederry on Saturday morning last. Our first game was against Silvermines which we lost on a scoreline 1-02 to .3 pts. Silvermines went on to defeat Upperchurch in the final of the tournament. Thanks to the Templederry Club for the invitation and for the refreshments afterwards.
We hosted the County U16B Co final last week end also. Thanks to the Senior and Juvenile Committee members who helped out on the day.
Borrisoleigh Camogie Club

Another busy camogie weekend. On Saturday the bus left the park with our under 8 to 13 panels.  They arrived in Ballinora where the all played a few matches; it was a great experience for our young players.  The Ballinora Camogie Club put on a fantastic spread of food for us, thanks very much.  After the games were over the girls went to planet leisure & bowling in Blackpool, where they had a few hours of fun and their tea.  All arrived safely back in the park shortly after 8 after a fantastic day. It was a pleasure to take such well-behaved girls on a trip; both adults and girls enjoyed the day. Thanks to all involved in the organising of the trip. 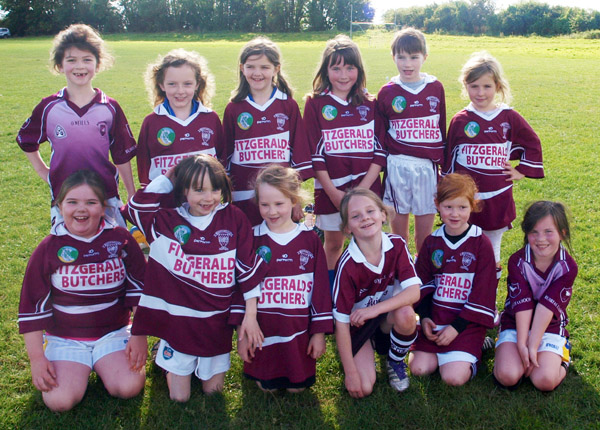 Under 8 Panel who played in Cork on Saturday last 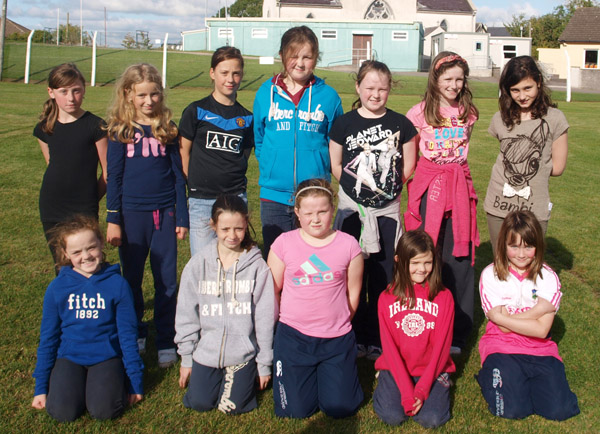 The Under 10 Panel who played Ballinora last weekend 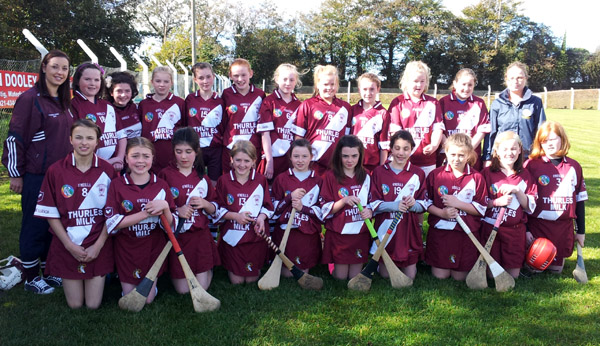 The Under 12 Camogie Panel who travelled to Cork on Saturday

Next weekend our under 12’s have their 3rd round of the championship away against Arravale Rovers at 12 noon on Saturday the 13th October. Best of luck to the girls and their mentors.
Borrisoleigh through to County Final 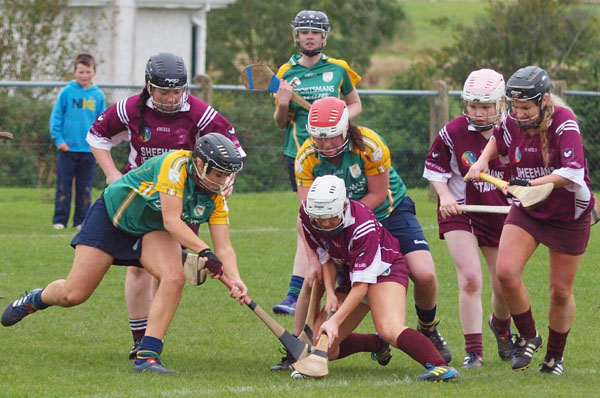 On Sunday the 7th October our Junior team played in the county semi-final against Toomevara. It was a cold Sunday afternoon. The spectators certainly got value for money with little separating these two teams. Borrisoleigh started off well and Toomevara were playing catch up from the start. However they did put us under a lot of pressure and had enough chances to register scores on the board however the Borrisoleigh defence did a fine job under pressure. Score at half time Borrisoleigh 1-6 Toomevara 1-3, with Borrisoleigh having the wind in the first half. The second half was very similar to the first with every ball contested. It was a game where both sides fought for every ball and at no stage could anyone relax. The full time score Borrisoleigh 2-8, Toomevara 1-4. There were fine performances from every position on the field. Well done to the panel and mentors. The County Final date and opposition have yet to be confirmed. After such a tough game there will be no training on Wednesday. Training resumes on Sunday morning at 12 noon. Scorers for Borrisoleigh were Nicole Walsh 0-5f, Mary Bradshaw 0-1, Noirin Stapleton 2-0 and Deirdre Corcoran 0-2.  More photos from the day available in a gallery.
All Star Award Nomination 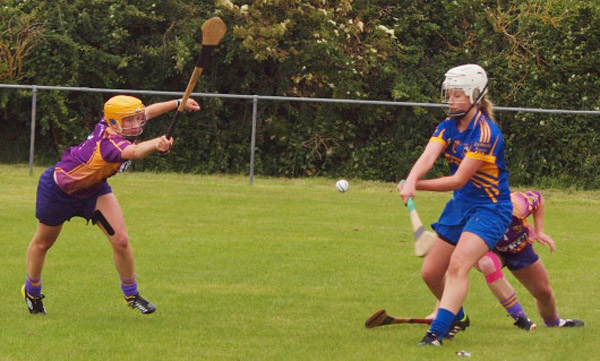 Nicole Walsh who has been nominated for an All Star Award in action for Tipperary against Wexford during this year’s championship earlier in the year
The 2012 Camogie All Stars in Association with O’Neills takes place at City West, Saggart on November 3rd. The 2012 All Stars team will be announced on the night as well as the Manager of the Year. See www.camogie.ie for ticket information.
Camogie club merchandise now available Hoodies, tracksuits, t-shirts, jerseys and raincoats available. See Advertising Section of www.borrisoleigh.ie for pictures. If interested please contact Caroline at 086 1522716. You can also follow us on Facebook.
Borrisoleigh Scór 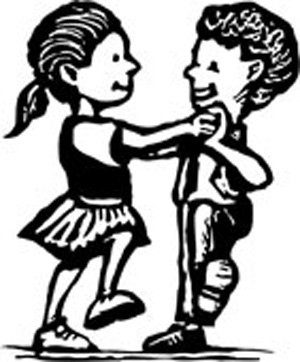 Set Dancing: Our dancing classes have resumed with a bang again this year. Great attendance at all our classes, all newcomers welcome, come along for a very enjoyable evening.

Old Dancing Shoes: We are again this year looking for your old dancing shoes. Let those shoes see the floor again there is always new feet too fit them. Anyone with old shoes can bring them to the hall on any Monday night or contact Fiona on 087-1417263 or Lucia on 086-3961211.

Scór Na nÓg: For any body intrested in taking part in Scor Na nÓg in any aspect ie. Ballad Group, Instrumental Music, Figure Dancing, Novelty Act, Solo Song we will be in the Marian Hall this Friday the 12th of October @ 8.30pm. Please pass onto all of your friends.

Blast from the past

U21 & Junior C Hurling: We have no fixture for this weekend. This is mainly due to the Minor championship still in progress. Hopefully we might be out the following week. The U21s intend to play a challenge this weekend.
Congratulations to the Camogie team on their great win over Toomevara last weekend. We wish them the best of luck in the final. Also congratulations to the U 14 team who won the plate final last week.

We intend to work on the goalmouths and the twenty one yards this Friday and Saturday. We would appreciate if people would refrain from playing on same when finished. These will be monitored at all times.

The club extends its deepest sympathies to the family and relatives of Eileen Ryan ( Rathcarden ) who passed away recently. Ar dheis de go raibh a anam dilis.

Borrisoleigh Community Develoment Association
It is that time of the year again and this year the Borrisoleigh Community Development Association plan to produce another annual. We would be very grateful if the clubs/organisations/schools of the community could once again forward us an article and pictures of the activity of your clubs/organisations/schools during the year of 2012. We are also seeking interesting articles that relate to Borrisoleigh. They can be present day or relate to the past. It would be great if some photos accompanied the articles but we will accept articles without photos. Plus we would like to get articles from people who have left the area, of their memories about Borrisoleigh, or from people who have moved into the area of their experiences in the locality. We would also welcome suggestions that may help us to improve the annual.

We aim to launch the annual on the fair of Borris weekend. To enable us to do this we will need all articles and photos by Monday the 29th October 2012. Can all articles be sent in word if possible with photos as separate attachments to this email address borrisoleighannual@gmail.com. Once again your assistance in the production of the 2012 annual will be appreciated. 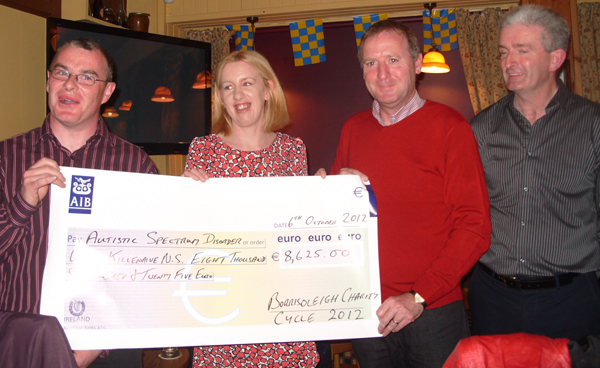 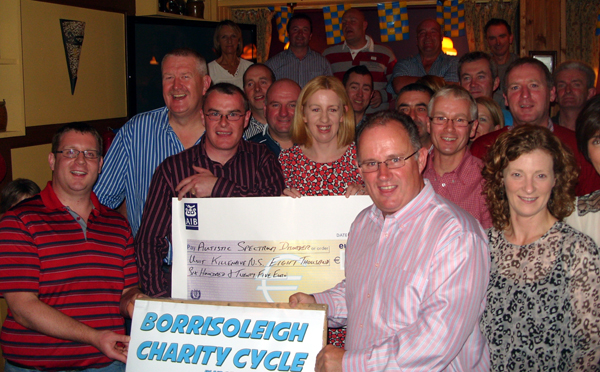 The presentation of the proceeds of this year’s cycle for the Autistic Spectrum Disorder Unit in Killenaive NS, took place last Saturday 6th October in the Clodagh Bar. The cheque was presented to Therese McCormack school principal by Ruairi O Connell & P.J. Delaney on behalf of Borrisoleigh Charity Cycle. Speaking to the large crowd present Therese thanked the organisers and supporters of the cycle for the great effort put in raising such a large amount which this year totalled €8,625. Since then additional sponsorship has been received which will be forwarded to the Unit. Thanks to everyone who attended on the night and to Lisa, Eamonn and Staff of the Clodagh Bar for their hospitality. 2013 will be the 10th year running the cycle and the organisers hope to make it a special event for that anniversary. Thanks again to everyone for helping out this year.

Pic of the past… down memory lane 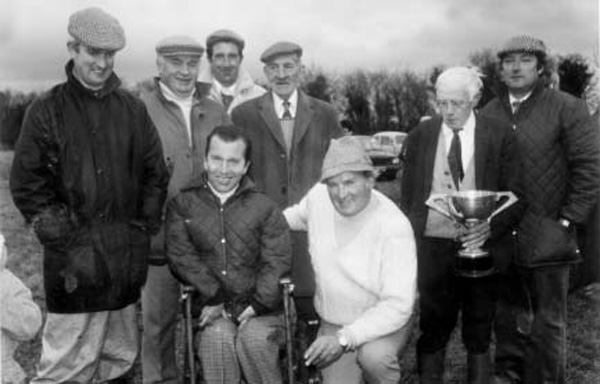 Dickie Nolan waiting to present the Perpetual Challenge Cup to the Earl of Dunraven, after his dog
‘Kilcurley Lad’ won the Derby Trial Stakes at Borrisoleigh Coursing