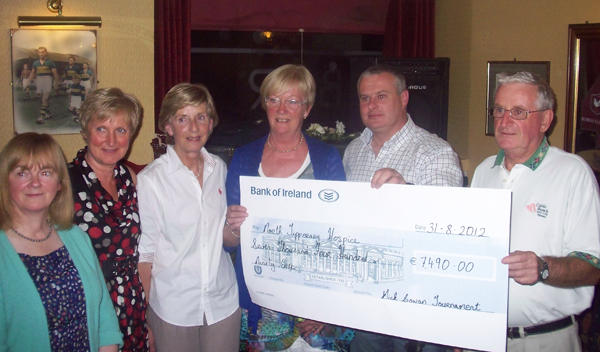 Proceeds from the Mick Cowan Memorial Tournament organised by Borris-Ileigh and Moyne-Templetuohy G.A.A. clubs in conjunction with the Cowan family, were presented to Marie McGrath of the North Tipperary Hospice Friday 31st August .
The Cowan family wish to express their thanks and gratitude to the organisers of the tournament and to all thise who supported this worthy cause. 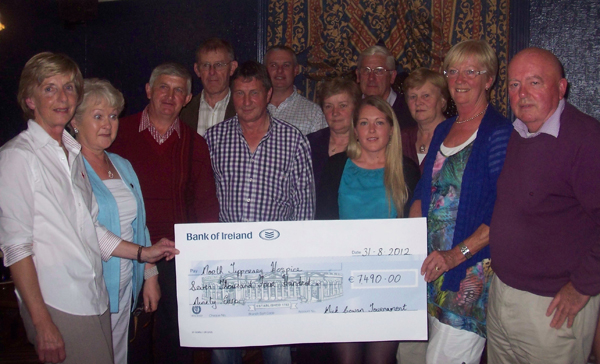 Breed Cowan presenting cheque for € 7,490 to Marie McGrath, with the organising committee. 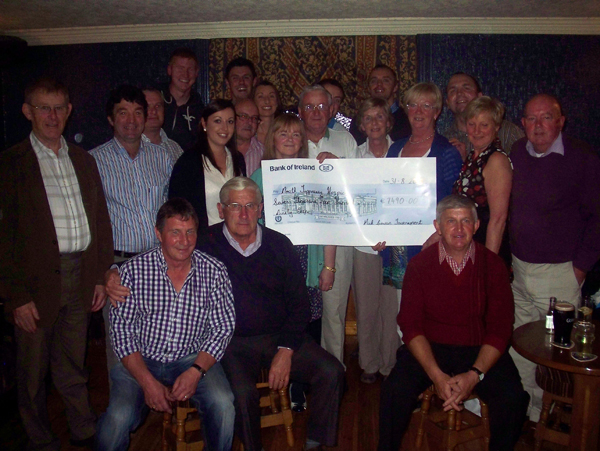 Members of the Cowan family with Marie McGrath (North Tipp Hospice) and the organising committee.

Our Junior team played the third round of the championship at home against Kiladangan on Sunday the 2nd September. Again they had another win, well done ladies and trainers. The first half was all Borrisoleigh’s with the score at half time 1-6 to 0-3. Borrisoleigh continued to be the stronger team in the second half again clocking up another 1-6. The score at full time being Borris 2-12 Kiladangan 2-3. The scorers for Borrisoleigh were Nicole Walsh 1-6, Jane McCormack 1-0, Grace O’Mahony 0-1, Deirdre Corcoran 0-4 and Noirin Stapleton 0-1. The fourth round of the championship is now on Thursday the 6th September at the Camogie Grounds against Fethard at 6.45 p.m.

Our under 10’s had a blitz in the Ragg on Saturday the 1st September, they got on very well playing three teams Ballina, Toomevara and Gortnahoe. The under 10’s have the Tomás Max memorial tournament on Friday the 7th September at 6 pm in the park. The visiting teams are Moycarkey, Silvermines and Roscrea. Thurles Milk will be donating a set of jersey’s for the under 12/14/16 teams on the evening. The club would like to thank Thurles Milk for this generous sponsorship. All support will be appreciated.

The under 13’s are our first team this year to reach a play-off situation. Well done to the girls they are in a quarter final this Saturday the 8th September at 4 pm in the Camogie grounds the Ragg. They are playing Moylerovers again all support will be appreciated.

Juniors, under 14 and 16’s will be texted about training. Our under sixteen’s are finished with matches for the season their last two competitive matches will not be played.
Under 12 training parents/guardians will be texted.
Under 10 training at 6.30 pm in the park on Tuesday evening.
The under 6 and 8 training continues on Tuesday evening at 6.30 pm to 7.30 pm, in the Park. Could all girls bring their helmets, hurleys and shin guards. 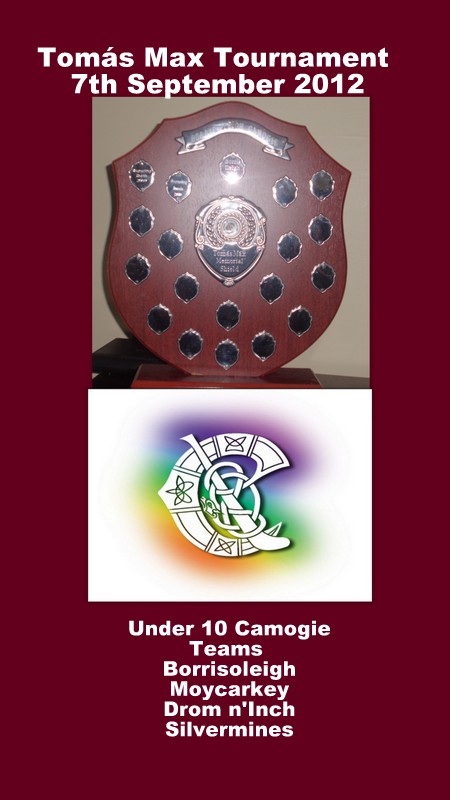 Congratulations to Joanne and Martin 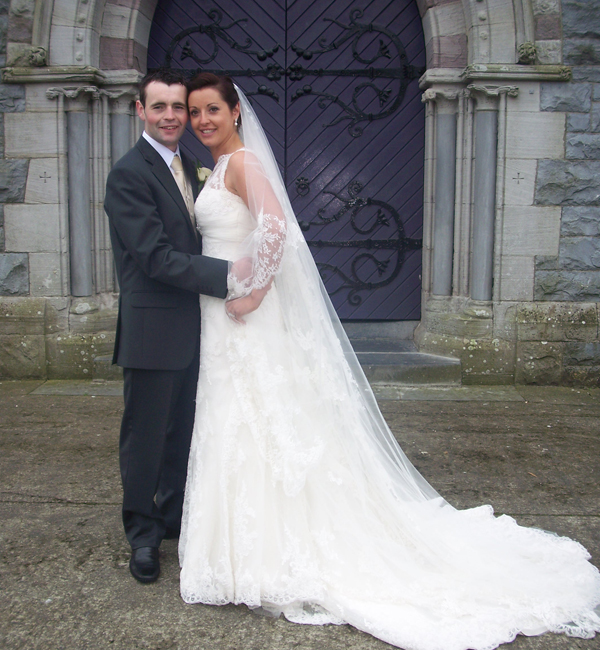 Congratulations and best wishes to Joanne Cowan, Borrisoleigh and Martin Treacy, Fantane who celebrated their wedding Friday 24th August, in the Sacred Heart Church, Borrisoleigh followed by a reception in The County Arms Hotel, Birr. We wish the new Mr. and Mrs. Treacy the very best for the future.

Joanne and Martin with the Cowan family 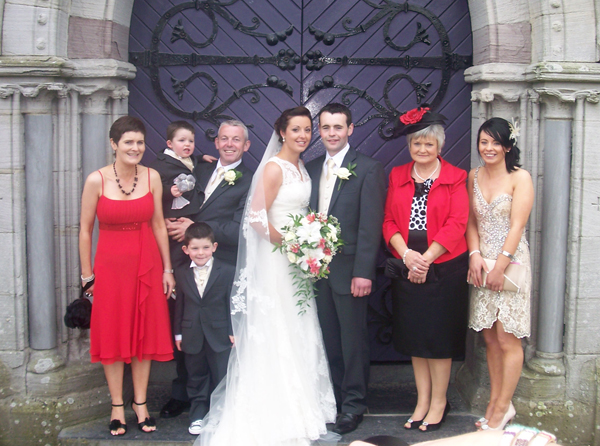 Joanne and Martin with the Treacy family

Borris Ileigh Juvenile GAA Club
U12 Hurling: Our Group 3b team travelled to Dolla on thursday evening last to participate in the Group 3b end games hosted by the Silvermines club. We were drawn against Roscrea in the first game and despite been down four points at half time a great second half performance meant we emerged victorious. In the final we played the host club Silvermines and despite a brave performance were beaten on the night. Well done to the team selectors Michael Galvin and John Hogan and all the players who put in a great effort during the year. Thanks also to the Silvermines Club for hosting the games.
U14: Our U14’s got of to a winning start in the plate competition with a victory over Silvermines in the opening round. The next fixture is away to Shannon Rovers this Wednesday evening.
U16: Our U16A Semi final v Nenagh Eire Og took place last Thursday evening in Borrisoleigh. A couple of early goals gave Nenagh a great start and left our lads with a mountain to climb. They worked hard to get into the game and fought back to within three points. Nenagh however pushed on again to win on a scoreline of 3-13 to 1-11. Thanks to the players for their efforts throughout the year. Great credit is also due to the Manager Brendan Kenny along with his selectors Tom Hurley, Francis Doolan, and Ruairi O Connell for their efforts also.
Well done to Kieran Maher and Eoin Stapleton who represented the club at Inter County level in the U16A and U15B competitions last week end.
Borris-Ileigh GAA News

Senior Hurling: We will play Eire Og Anacarthy in Cashel on Saturday 15th September at 2pm. Your support would be appreciated on the day. Junior C Hurling: This match versus Shannon Rovers will be refixed next Monday night.

Minor Hurling: We are down to play Borrisokane on Saturday 8th September at 6pm in Borrisokane.

A presentation night was held in Stapletons bar on last Friday night where the proceeds of the Mick Cowan Memorial Tournament were donated to North Tipp Hospice. Marie Mc Grath accepted a cheque for approx. 7500 euro on behalf of the Hospice. This was a fantastic amount and hopefully as much if not more will be raised next year. On behalf of the Cowan family Breeda thanked all concerned. A great night of music song and craic ensued in to the early hours. We thank the Templetuohy Club Officers, committee and supporters who attended on the night in honour of Mick and also to our own club. We thank the Cowan family for all the food they provided. The sing song was like old times, a case of Borris-Ileigh versus Templetuohy. We sincerely hope this tournament continues well in to the future.

Club merchandise is available in the pavilion every Saturday between 11am to 1pm or contact 087 9439531.

The best of luck to the Tipp Minor Hurlers in the All-Ireland next Sunday and to Martin Maher who is a selector. Go mbeidh an bua agaibh.

The club wishes the best of luck to Ciaran Cowan and Philip Rabbitte who are leaving our shores for Australia.

The club extends its deepest sympathies to family and relatives of Maura Maher ( Greenlawn ) who passed away recently. Ar dheis de go raibh a anam dilis. 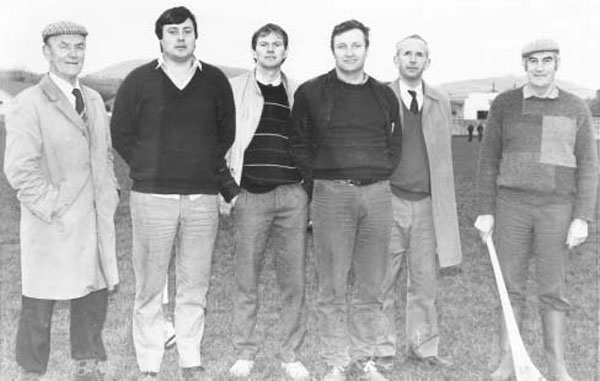