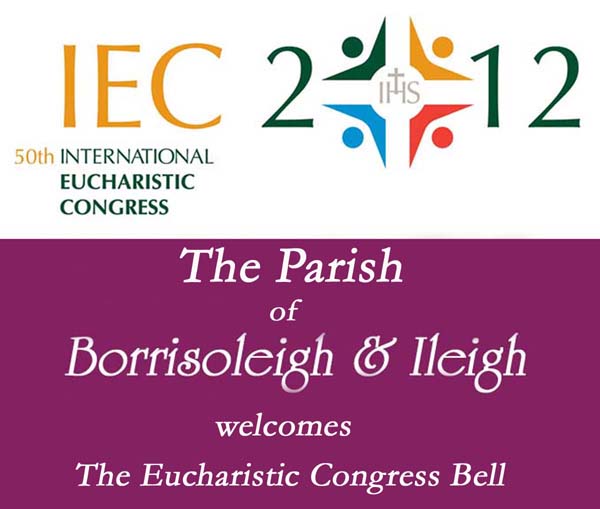 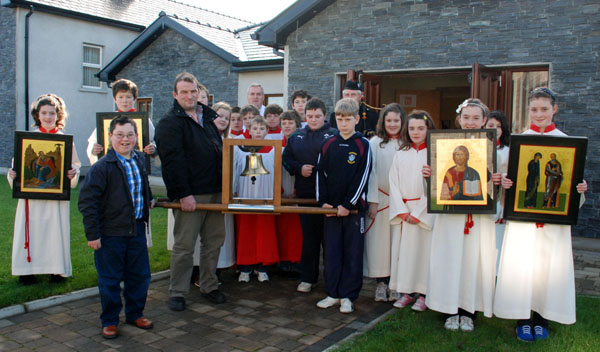 The Eucharistic Congress Bell is welcomed to our parish

The 50th International Eucharistic Congress 2012 will take place in Dublin from June 10th to 17th 2012 under the theme ‘The Eucharist: Communion with Christ and with one another’, and expects 25,000 pilgrims to participate each day, both from Ireland and from overseas. It is an international gathering of people which aims to:
-Promote an awareness of the central place of the Eucharist in the life and mission of the Catholic Church;
– Help improve our understanding and celebration of the liturgy and
– Draw attention to the social dimension of the Eucharist
The Program of Events for the week will include; Prayer, Eucharist, workshops, discussion groups, cultural events, a youth space, tours, exhibitions and more.
Venues:
10th June Opening Ceremony
RDS, Ballsbridge, Dublin 4
11th- 16th June Daily Mass and Workshops
RDS, Ballsbridge, Dublin 4
17th June Closing Ceremony
Croke Park Stadium, Dublin 3

Between now and the 10th June, 2012, the Eucharistic Congress Bell will travel throughout the 26 Dioceses of Ireland in Pilgrimage. The Bell will invite everyone to faith, to prayer, to reconciliation and to mission which has always been important in our Christian heritage.

The Parish of Borrisoleigh and Ileigh welcomed the Eucharistic Congress Bell on Friday last 4th November. During, what turned out to be, a sunny day the Bell was welcomed at the 10.30 morning Mass, then it was carried to The Community Centre where all those who attended were given an opportunity to ring the Bell. Fr. Michael Barry then gave a short audio visual presentation on the forthcoming International Congress, after which, light refreshments were served.

In the afternoon the Bell was taken to Glenkeen Cemetery, Ileigh Cemetery, Carrigeen Nursing Home, St. Brigid’s Cemetery and back to the Parish Churchyard. At all of the locations prayers were recited, especially for The Faithful Departed. Fr. Liam Everard, PP then conducted a closing ceremony in the Churchyard before the Bell was taken to Kilfithmone Church for the handing-over ceremony to Templemore Parish. Rev Peter Baker led the ceremony, Canon Eugene Everard assisted along with Fr. Martin Murphy of Drom and Inch Parish (The Bell travelled to Templemore under Garda escort via Drom where a short prayer service was held en route).

Many thanks to all who participated in this unique spiritual event and to all who worked to make it happen behind the scenes. 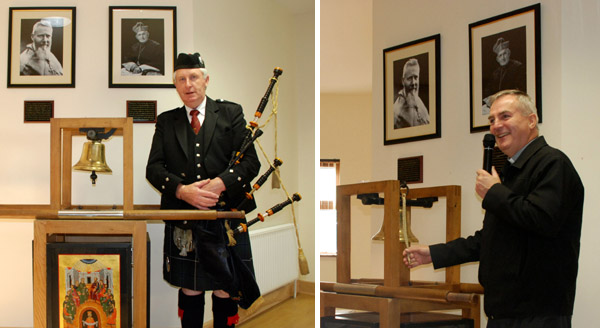 John McLoughney heralded the coming of the Bell to The Parish while Fr. Liam gives it a ‘dong’. 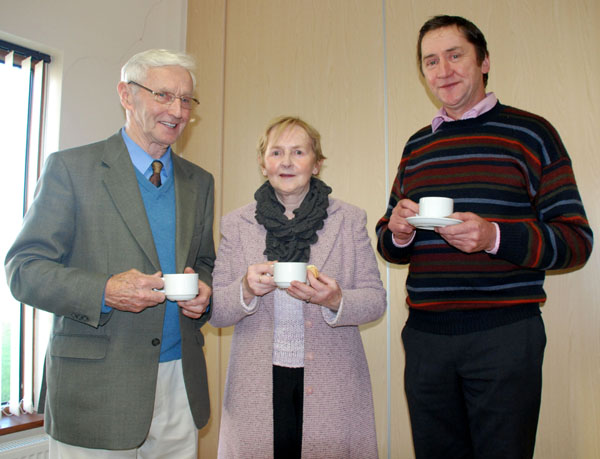 Eddie, Mary aned Gerry enjoy a cuppa in the Community Centre where refreshments were served 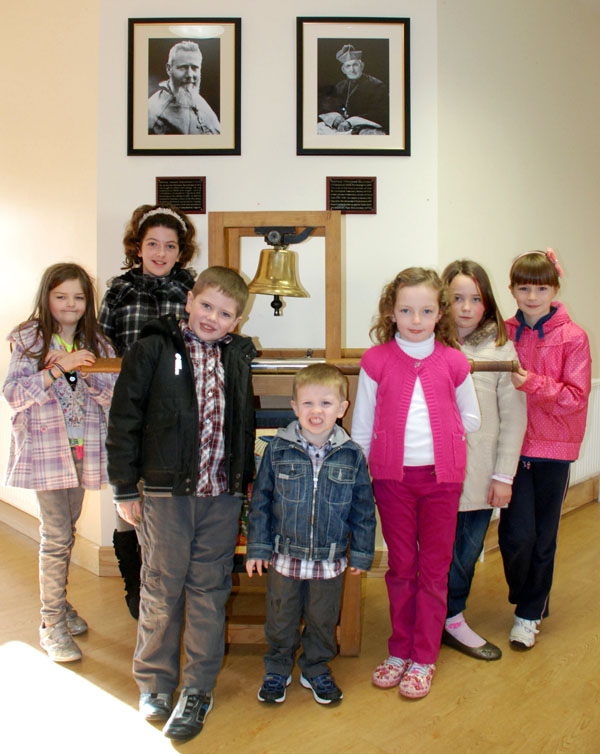 Some of the little people gather round the Bell 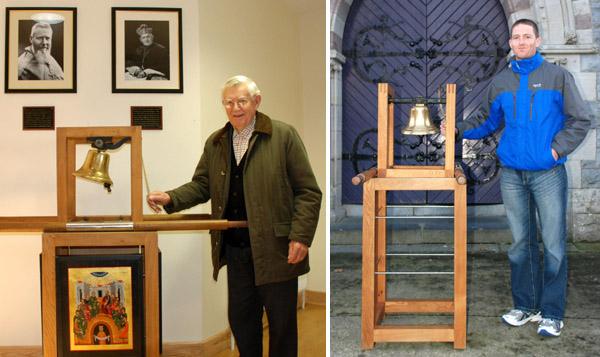 Jack ‘gives it a lash’ while Vinny takes the more gentle approach! 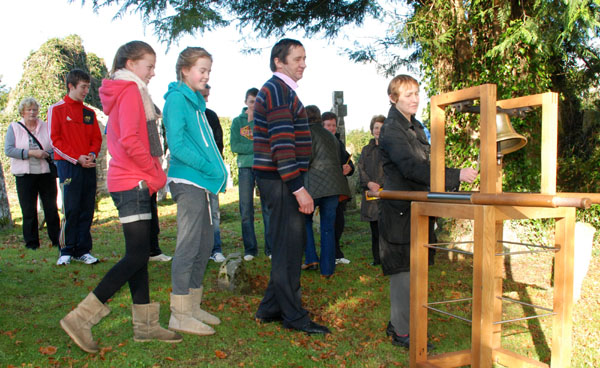 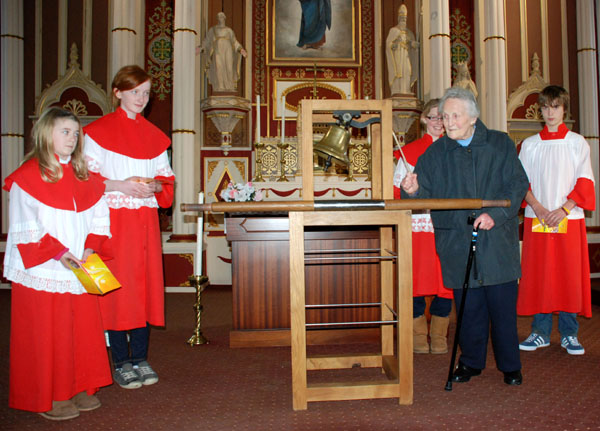 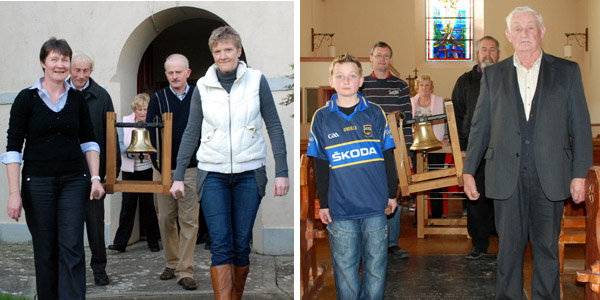 Two teams of four carry the Bell in Ileigh 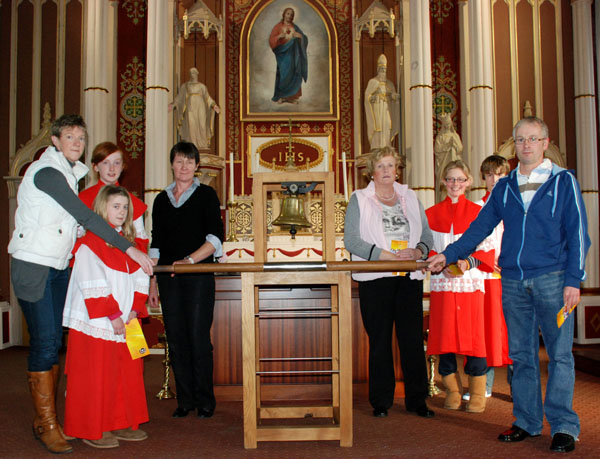 Gathering round the Bell in Ileigh Church 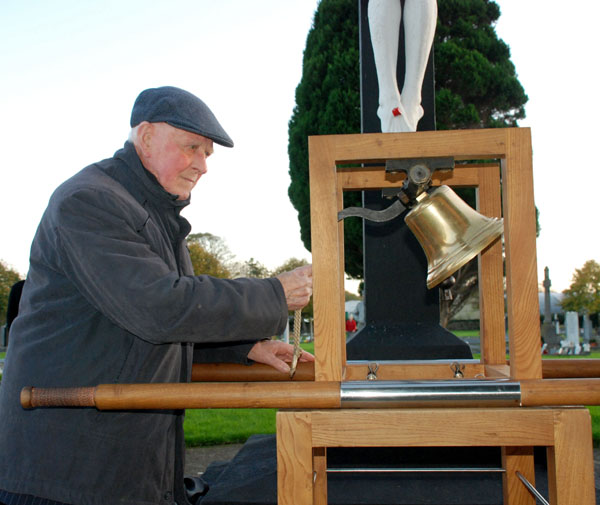 Jimmy Murphy keeps a close eye on what he is doing at St. Brigid’s Cemetery! 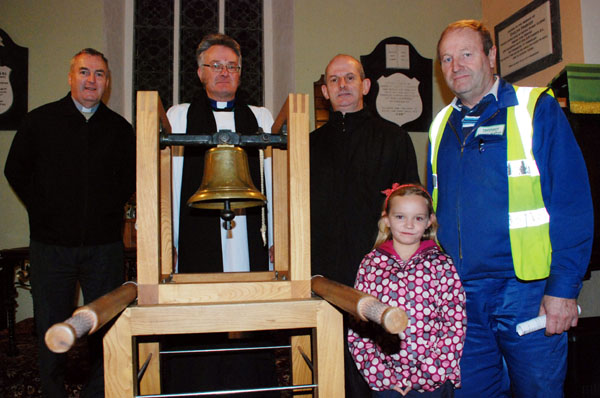 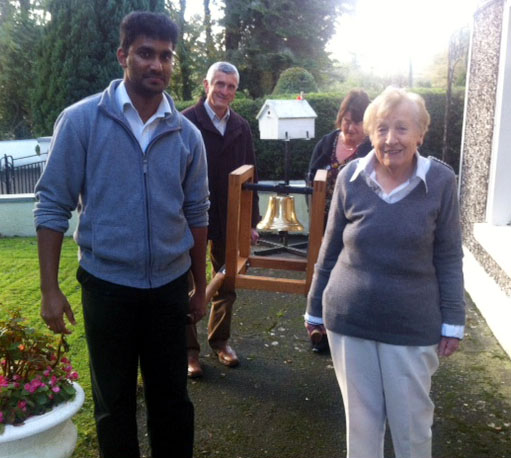 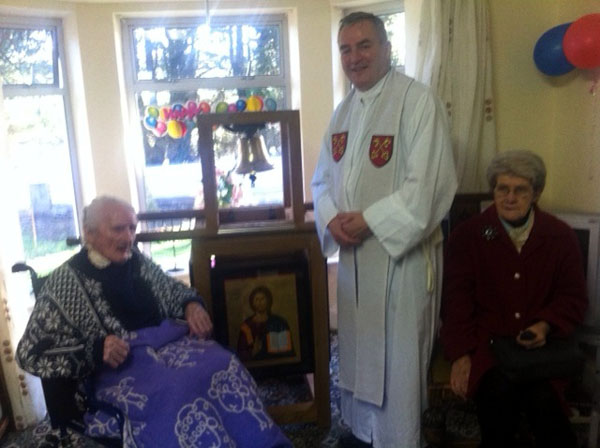 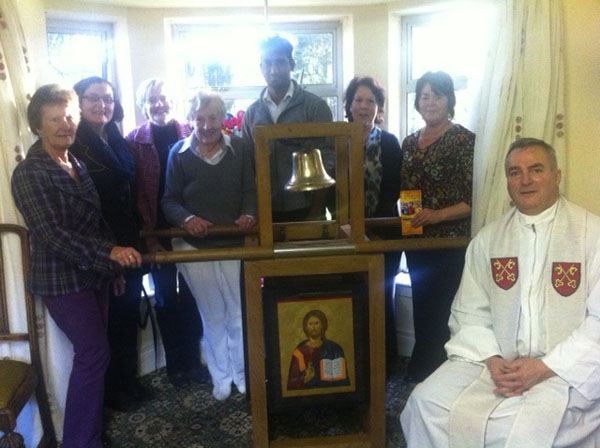 The Eucharistic Congress Bell in Carrigeen Nursing Home on Friday last 4th November  To view all the photos taken on the day visit the following galleries:
Gallery 1
Gallery 2 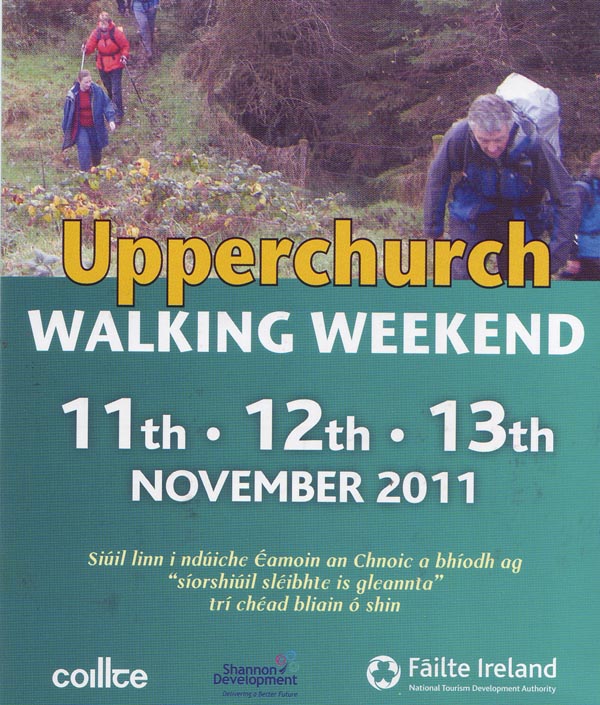 Annual Collection for our Local Cemeteries 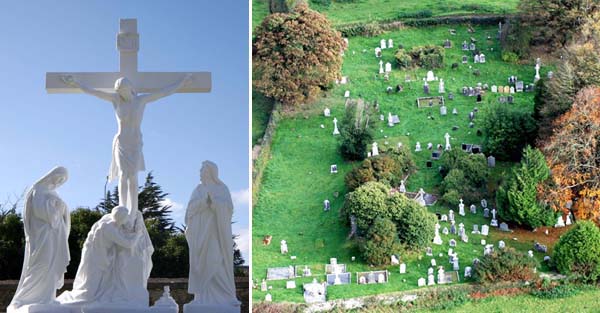 The Annual Collection for the upkeep of St. Bridget’s, Glenkeen and Ileigh Cemeteries will take place at Masses on 12th and 13th November. Your support would be greatly appreciated as this collection is the only means of funding the maintenance of these cemeteries. Please place your contribution in an envelope marked Cemetery Collection.

You are invited to the Annual General Meeting of Borris-Ileigh Camogie Club on Friday 11th November, 2011 at 8 pm in the Town Park. New members are always welcome.

Scór News  Anyone entering Scór Na Nóg please give your names to Fiona in the Marian Hall on Monday night 14th November.

Borris-Ileigh Juvenile GAA Club  Due to unforseen circumstances the U14 Hurling Parish League was cancelled last weekend. The qualifying games will now take place this Thursday 10th November. Players should wear the colours of their teams as directed by text last week. We hope to run off the final on Saturday 12th November. Captains for this years league are Brendan O’Dwyer, Tom Fitzgerald, Cian Murray and Charlie Stapleton. The league is for players born in 1997 up to 2000. All players should be in the Town Park on Thursday at 5.45pm. 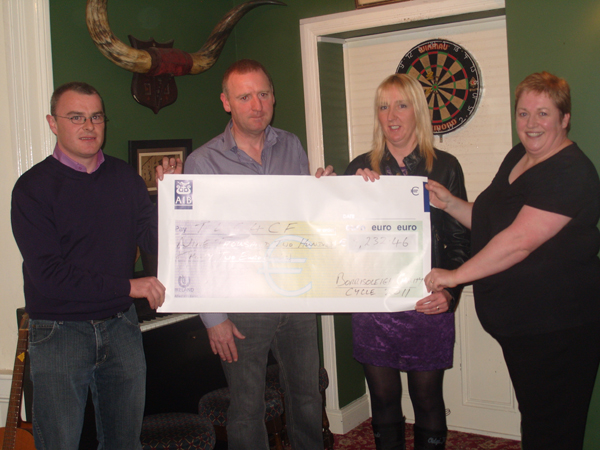 On Saturday 22nd October in Finn’s Bar a large crowd was present where a cheque for €9,232.00 was presented by Borrisoleigh Cycle to the Cystic Fibrosis Charity TLC4CF. Catherine Maher and Sarah Armstrong of TLC4CF accepted the cheque from P.J.Delaney and Ruairi O’Connell. Before making the presentation Ruairi outlined the history of the cycle which is now in its eight year and how over €80,000 has been raised by the people of Borrisoleigh for various charities in that time. TLC4CF was a very deserving cause and the Cycle were very pleased to support such a great charity and was delighted once again with the amount raised. He said that the cyclists, their sponsors, those involved in helping out and the local business’s in Borrisoleigh who support the cycle each year should be very proud of their efforts. Sarah Armstrong spoke on behalf of TLC4CF and said that they were overwhelmed by the amount of money raised and outlined where such funds would be directed. She also outlined the many services and supports that TLC4CF provide for CF patients and their families. Sarah also thanked everyone who was involved in anyway through organising or participating in the Cycle. The presentation was followed by refreshments and a very enjoyable night was had by all. The organisers would like to thank Joe Loughnane and the staff of Finn’s Bar for their hospitality on the night and would once again like to thank everybody who contributed in any way to this years event ensuring that it was a tremendous success once again. 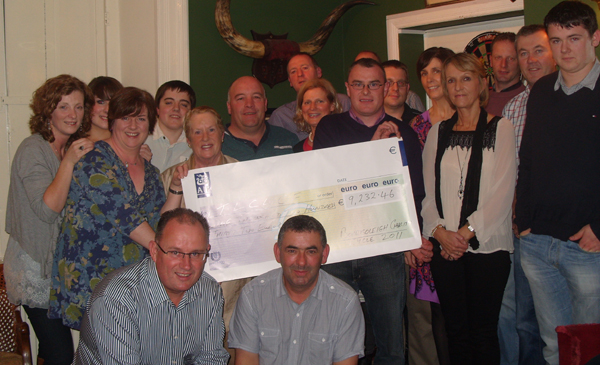 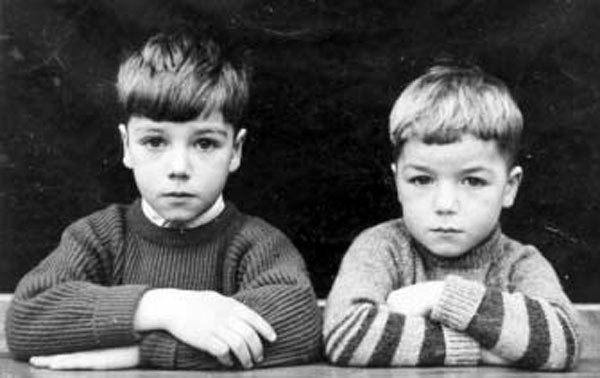