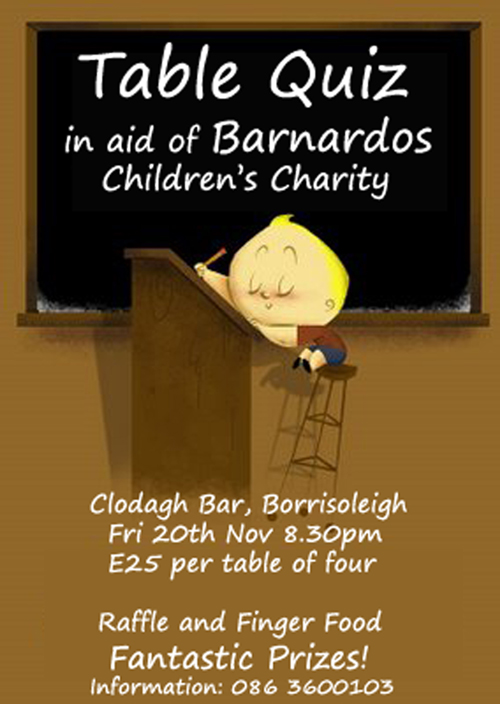 A Table Quiz will be held in the Clodagh Bar on Friday next November 20th at 8.30pm in aid of Barnardo’s Children’s Charity. Your support would be greatly appreciated. Further information  from  Elaine Hurley on 086 3600103 or hurley.e@gmail.com

Congratulations on your Graduation! 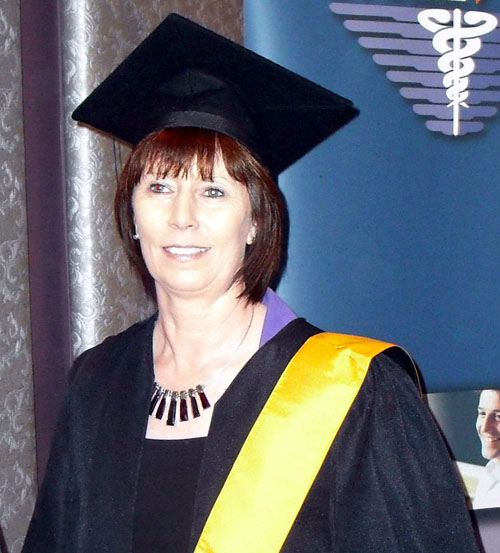 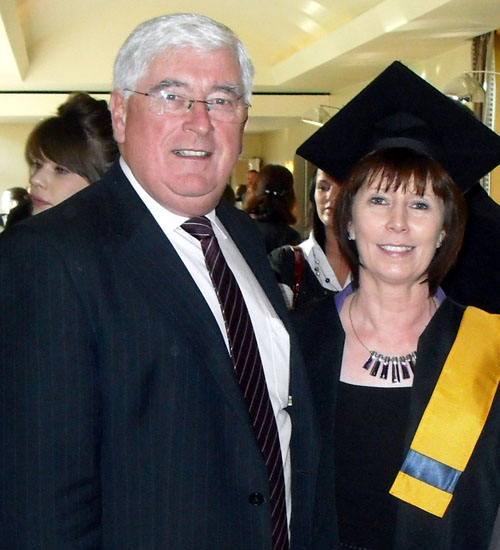 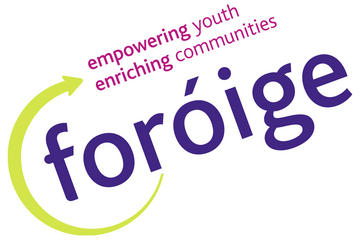 A registration night for a new Foróige Club will take place in the Marian Hall this Friday, beginning @ 8.30pm. The club is open to all 1st, 2nd and 3rd year students and will take place every Friday from 8.30 – 9.30pm. Registration is €15 for one and €25 for a family.
Murty Ryan of Ballyroan RIP 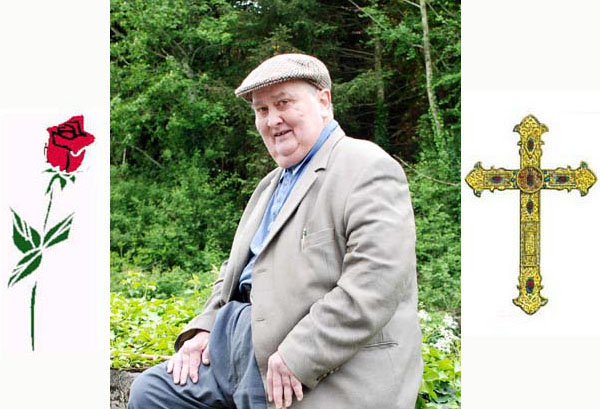 The death occurred recently of Murty Ryan of Ballyroan. His Funeral Mass took place in the Sacred Heart Church Borrisoleigh on Friday 13th November with burial in St. Brigid’s Cemetery. We offer our deepest sympathies to his family and friends. May he rest in peace 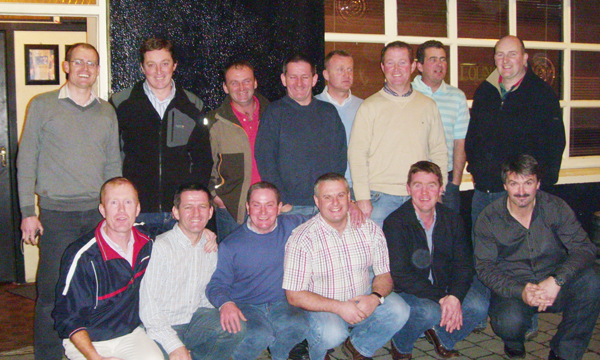 All fourteen lads travelled by bus last Saturday 14 November to Terryglass where they engaged in the combat activity of Paintballing. Refreshed with a liquid lunch at Paddy’s Restaurant and later for ‘a few sociable beers’ in Borrisokane, they eventually returned to the hospitality of Joe Loughnane’s Pub in Borrisoleigh to  round off the day in style! 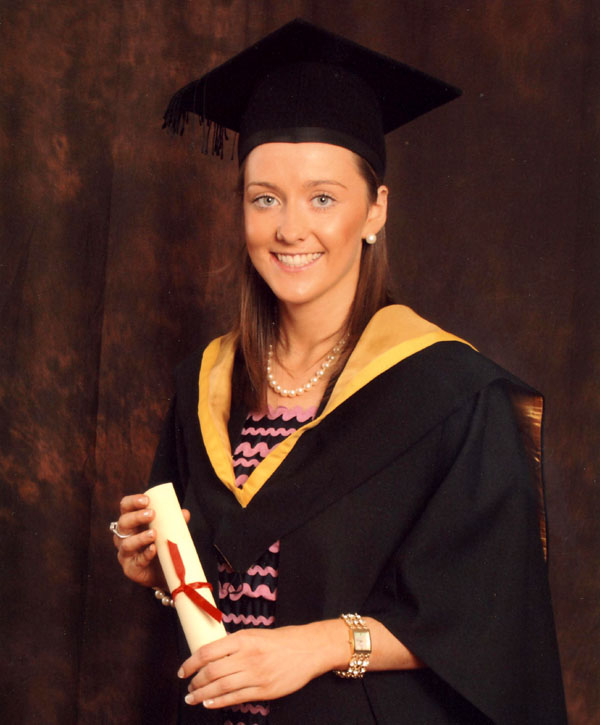 Marie Ryan of Ballyroan recently graduated from The University of Limerick with a Bachelor of Science in Physical Education and Mathematics. She is currently on the teaching staff of Desmond College in Limerick. We wish her the very best in her future teaching career.
Scoil Bhríde, Fantane First Aid Talk

Christina O’Dwyer recently gave an introductory talk on basic First Aid to the parents of the children attending Scoil Bhríde, Fantane. All who attended found the presentation to be very informative and practical. The talk came after the Parents’ Association’s AGM during Kellie Kelly and Tracey Devaney were returned as Chairperson and Secretary respectively with Sarah Corcoran being elected as Treasurer. 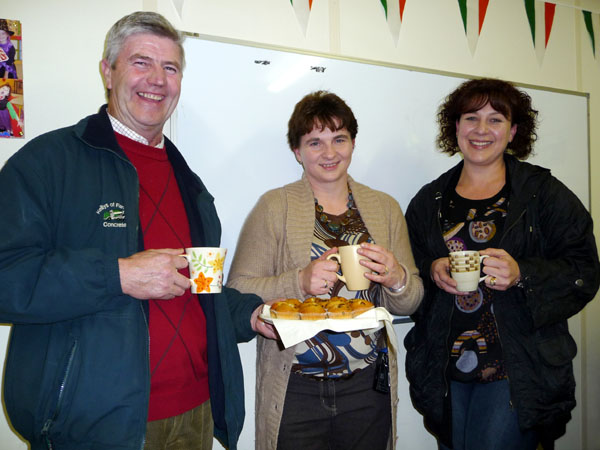 Ollie Kelly invites Christina O’Dwyer and Kellie Kelly to have a bun or two after the First Aid talk! 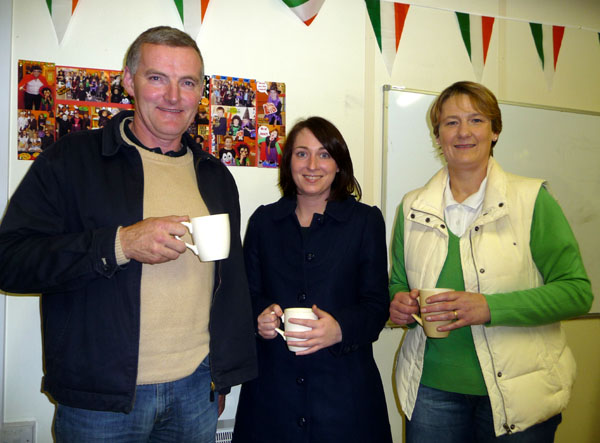 The following email was received recently from Maureen Price, Australia:

"I’ve been reading your weekly update with great interest. I read about John Egan who emmigrated to Australia, as did my great grand parents, Patrick & Ellen Kelly, I’ve attached some pictures you may like. The grave is at Eganstown." 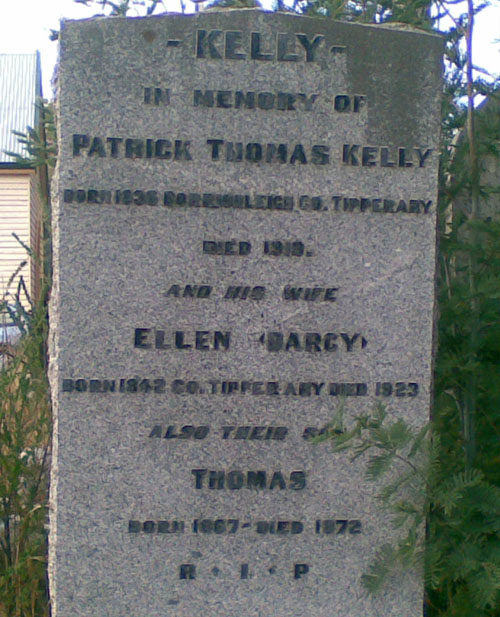 Maureen goes onto say:
"I came over last year to Borrisoleigh with my mum Bernadette Price nee Kelly. We met some great people walking around chatting, and found Billy Ryan, who knew a cousin. Billy’s mum was a Kelly before marrying, I took pictures at his home." 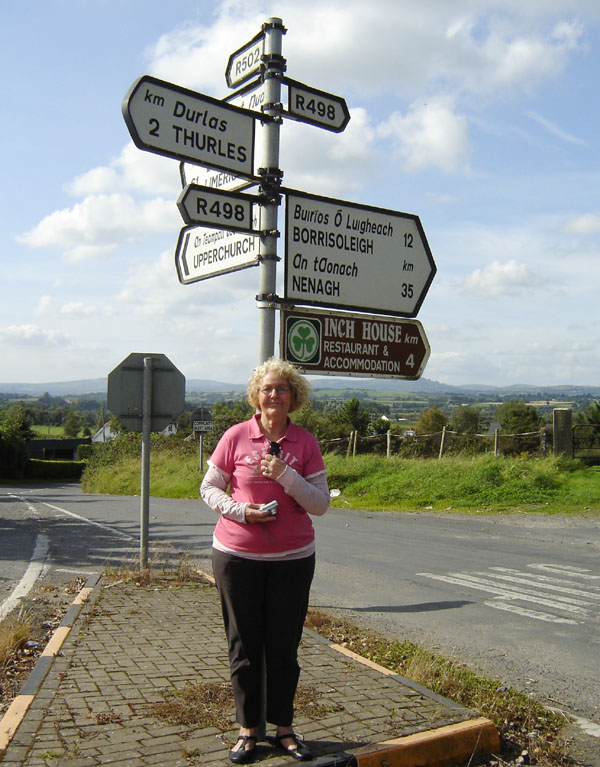 Bernadette Price nee Kelly on a recent visit to Co. Tipperary tracing the steps of her ancestors 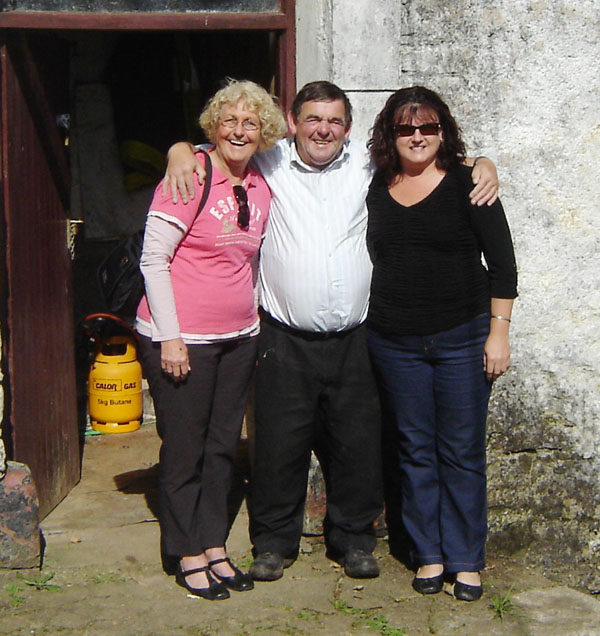 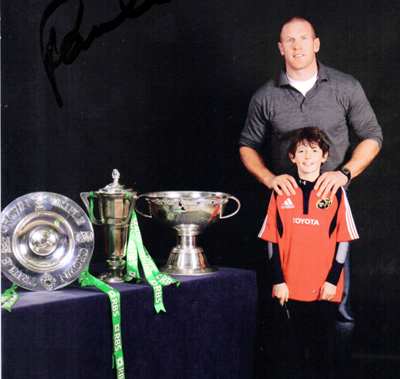 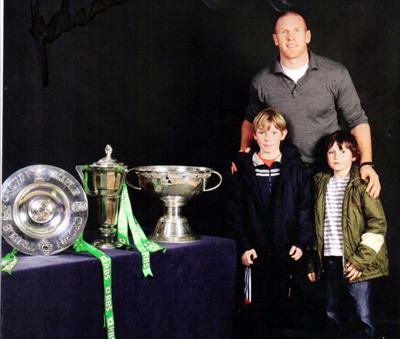 Aaron’s cousins Eoghan and Tomás from Cahir went along to view the silverware too! 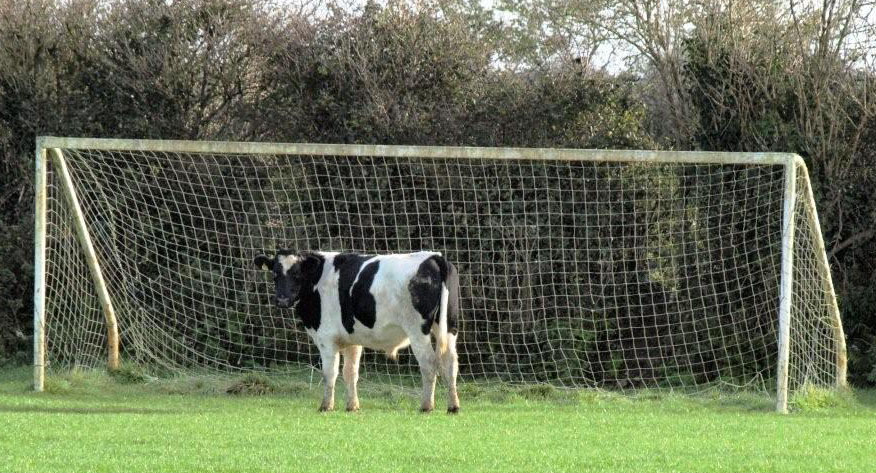 You’ve heard of ‘Cow and Gate’ now let me introduce you to ‘Cow and Goal’! 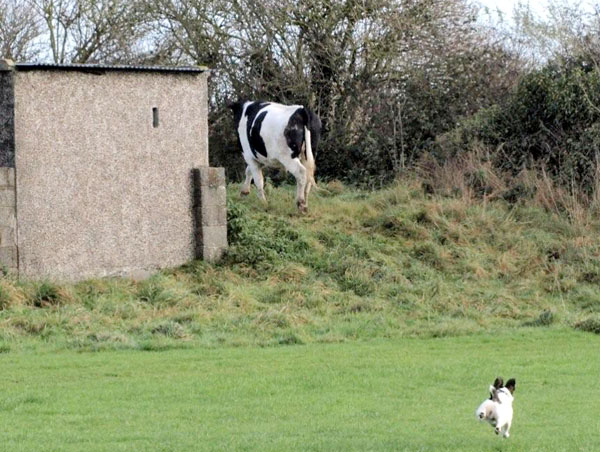 I may be little but I’m the BOSS – find your own turf (woof woof!)

It is a very busy time for Clodagh Macra. The highlight so far this month has been the IFJ Queen of the Land Festival. Gemma Ryan, Cooleen was the North Tipperary Queen. Although she didn’t win, she represented her club and region excellently. The 27 queens from all over Ireland were put up in The Bridge House Hotel for the weekend and had to partake in everything from interviews to treasure hunts. As always there was a big Clodagh contingent there to support Gemma over the weekend, and everyone certainly enjoyed themselves.

Well done also to our Public speaking team of Liz Kennedy, Edel Ryan and Majella Carey, who took the North Tipp title the previous weekend and they now proceed to the All-Ireland quarter final in December.
The soccer competition will take place on Sunday November 29th and anyone interested should contact Alan. 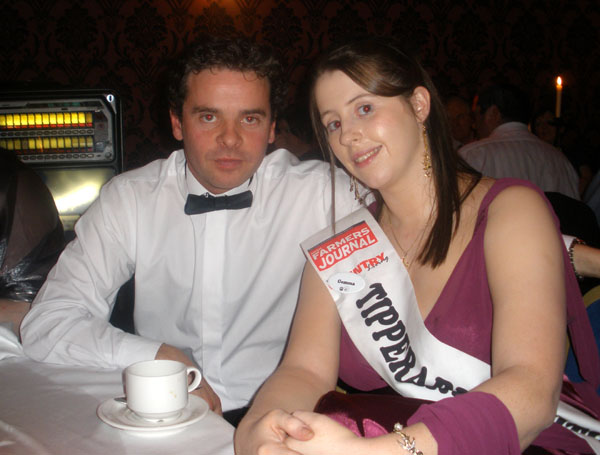 Gemma with her festival escort, Mark

Gemma with her sisters Karen and Brid 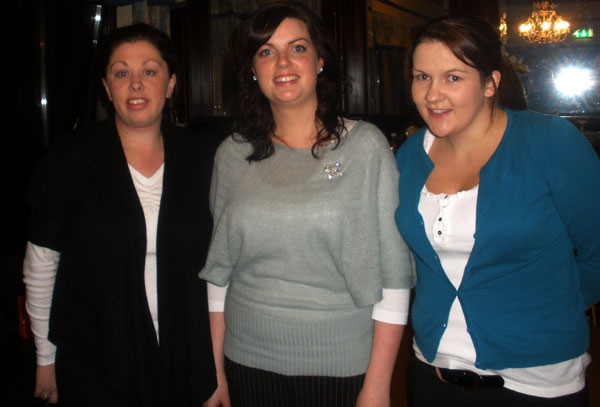 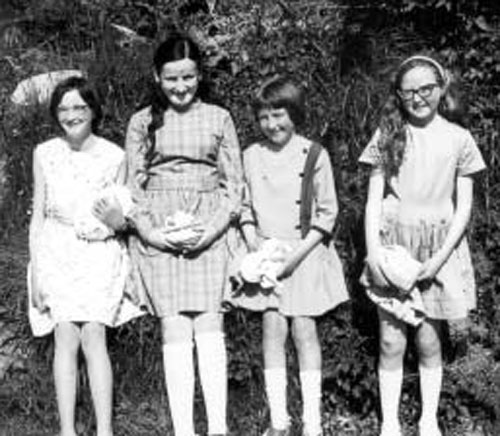